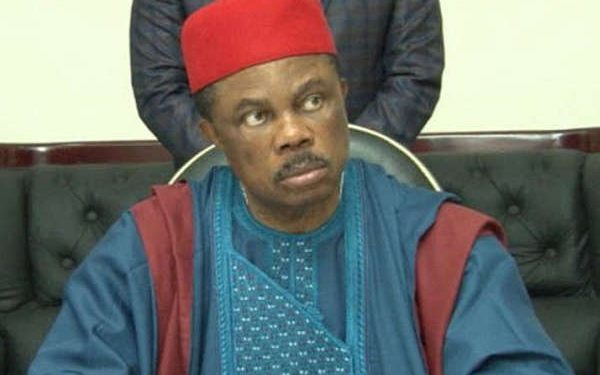 The People of Ogbunka Community in Orumba South Local Government Area of Anambra State, have protested against alleged imposition of a traditional ruler, Chief John-Mark Anyaoha, on them by Governor Willie Obiano led-government.

The President General, Ogbunka Development Union, Chief Emmanuel Okoro, stated their position when no fewer than 600 of them including chiefs, women and the youths besieged the Anambra Government House and the state House of Assembly in a peaceful protest, over the weekend.

The protesters bore placards with varying inscriptions such as; ‘Ogbunka community doesn’t need a blind King’, ‘Ogbunka Ancestral throne not for sale’, ‘we want peace in Ogbunka, give us back our stolen heritage’ among others.

Chief Okoro urged Governor Obiano, to come to their aid by stopping the said man from parading himself as the traditional ruler of the community, noting that if urgent steps were not taken to arrest the ugly development, it could throw the community into a state of chaos.

He urged the governor to disregard any purported coronation in Ogbunka, noting there was none.
In their separate speeches, some elders and youths from the community, including Chief Charles Anunobi, Ikechukwu Onwudiwe, Hyacinth Onwuaso, Abigail Oria and Daniel Jonathan, among others also appealed to the governor to look into the matter and resolve it amicably to avoid turmoil in the community.

Also in their separate response, the Commissioner for Local Government, Town Union and Chieftaincy Affairs, Mr. Greg Obi, represented by Mr. Chris Mmadu; Chief Whip of the state House of Assembly, Hon. Laurence Ezeudu and the member representing Orumba South State Constituency, Hon. Emma Nwafor thanked the protesters for their peaceful conduct and assured the people of Ogbunka that government would look into their grievances, as the state government wants absolute peace in the state.