By Jude Owuamanam and Jennifer John 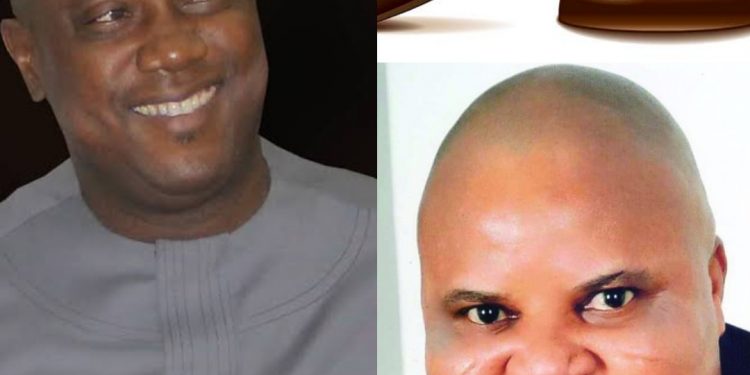 There was confusion in Saturday’s by-election to fill in the vacant position of the Imo North senatorial seat as the Independent National Electoral Commission (INEC) announced the All Progressives Congress (APC) as winner without returning a candidate as duly elected.

Senator Ifeanyi Araraume and Frank Ibezim has been embroiled in a political game of wits over who is the authentic candidate of the party following the controversy that trailed the party’s September 3 primary election.
The election, which took place in 64 wards of 710 electoral units across the six local government areas of the senatorial district, was characterized by low voter apathy as most voters failed to turn up.

The announcement of the results itself at the state headquarters of the INEC was without drama as the Returning Officer, Hakeem Adikum, declared APC, the winner of the Imo North bye-election, which held Saturday without returning a candidate.

The electoral body had expected violence when it shifted the announcement of the results from the state constituency office to its headquarters in Owerri. However, it met a pleasant surprise.

Adikum, who quickly rose after announcing the results scored by various political parties and their candidates, simple said “I hereby return the All Progressives Congress as the winner of the bye-election held in Imo North on Saturday, December 5,” and left the hall followed by other INEC officials

In announcing the results, Adikum said that APC scored 36, 811 votes, while Emmanuel Okewulonu of the People Democratic Party came second with 31, 903 votes.

According to the returning officer, APC won in five out of the six Local Government Areas in the senatorial district while PDP won in one LGA.
While PDP won in Obowo LGA where its candidate hails from, the Returning Officer said that APC won in Okigwe, Onuimo, Isiala Mbano, Ehime Mbano and Ihitte/ Uboma LGAs.

However there was disquiet in the hall over INEC failure to return any candidate as the winner of the election as jubilating supporters of the two dramatis personae, Araraume and Frank Ibezim, both laying claims to the ticket vamoosed one after the other.

Addressing journalist after the announcement in the early hours of Sunday morning, INEC Resident Electoral Commissioner in Imo state, Prof Francis Chukwuemeka Ezeonu said that the the electoral body was unable to return a particular candidate from APC as the winner of the election because of several court orders for and against Araraume and Ibezim of the APC.

It will be recalled that 24 hours before the conduct of the poll, an Appeal Court in Owerri had upheld the appeal instituted by Ibezim over the decision of a lower court disqualifying him from the election and giving it to Araraume. The lower court had said that the disqualification of Ibezim by the APC electoral panel was in order and gave the ticket to Araraume, who came third in the primary election.

But Justice Uchechukwu Onyemenam who delivered the judgment, ordered INEC to immediately enlist Ibezim’s name as the candidate of the party for the by-election. The judge had ruled that the judgment of the trial Court delivered on the 6th day of November, 2020, in suit No. FHC/OW/CS/101/2020, be set aside.
However few hours before the appellate court decision in Owerri, an Abuja federal High barred Ibezim for life from contesting elections.

The court had indicted Ibezim of perjury based on the credentials he submitted to INEC and his party, the APC. Justice I. E. Ekwo declared that Ibezim was not qualified/eligible for nomination to contest Imo senatorial by-election having made false statements/declaration in the affidavit and documents he submitted to INEC for the purpose of contesting the election.

Justice Uchechukwu Onyemenem who delivered the judgment, ordered INEC to immediately enlist Ibezim’s name as the candidate of the party for the by- election. In his ruling, Onyemenam said that the judgment of the trial Court delivered on the 6th day of November, 2020, in Suit No. FHC/OW/CS/101/2020 was set aside for want of jurisdiction.

I’ll appeal the court ruling – Ibezim
But reacting to the development, Ibezim, said he is in the race and would appeal the court, which ruled against his candidature bordering on forged certificate.

Ibezim has signified his intention to appeal against the judgment that declared him ineligible to contest the election.
Speaking with reporters at his home town in Ihite Uboma, Ibezim said that he stands by the appeal court ruling in Owerri which affirmed him as the authentic candidate of APC.

He said he was very much in the race as he was qualified in every ramification to contest the election, adding, “I’m still in the race, but the perjury case leveled by the Federal High Court against me must be proved so I’m going to appeal it.”

Ibezim stands disqualified – Araraume
On the other hand, Senator Araraume has stated his resolve to reclaim his mandate. He said that he’s the authentic candidate following the Abuja Federal Court ruling against Ibezim.

I contested against two AP candidates – Okewulonu
The Peoples Democratic Party candidate, Emmanuel Okewulonu, said he was optimistic that the Imo North bye-election would favour him.

Ekewulonu, who spoke on the heels of the confusion trailing who is the authentic candidate for the All Progressives Congress (APC) in the election following the conflicting judgments at the Appeal Court in Owerri and Federal High Court in Abuja against the APC candidates, said that he stood against two candidates of the same party in the election. He said that he will exploit the loopholes in the squabbles in APC to reclaim the ticket

Imo Governor, Hope Uzodimma, said that the judgment of the Appeal Court has irrevocably pointed to the fact that Ibezim is the candidate of the party in the election,
Addressing the newsmen over the outcome of the election, the governor appreciated APC faithful for their resilience in the face of attempt to distract and confuse them.

He said, “They showed commitment and voted massively for the party. We have shown once more that Imo is APC state, committed to the ideals of APC, service and change”.

Meanwhile our correspondent who monitored the election, reports that the exercise witnessed voter apathy in some polling units. But the election was generally peaceful.

Some of the voters who spoke to our correspondent attributed it to the fact that the day coincided with one of the major market days in the area. The Ekezeala market takes place every eight days and Saturday happened to be an Eke market day.

Others however attributed it to the fact that not many people attached importance to the election while others said that they were disenchanted over the hash economic condition.

Some of youths, who spoke, where they were playing football said, “Oga we have to eat before queuing up for any election.”

Ekeikpa Market Square, Ihitte Uboma LGA witnessed voter apathy as the registered voters numbered are 639 while accredited voters was only 142.

A chieftain of the APC and State House of Assembly lawmaker representing Ihitte Uboma State constituency, Onyemaechi Njoku, speaking to newsmen at his Ato Nnerim ward, revealed that despite low deployment of security personnel to most of the polling stations in his area, the election still went on peacefully.

Why I flagged off rural roads construction – Uzodimma