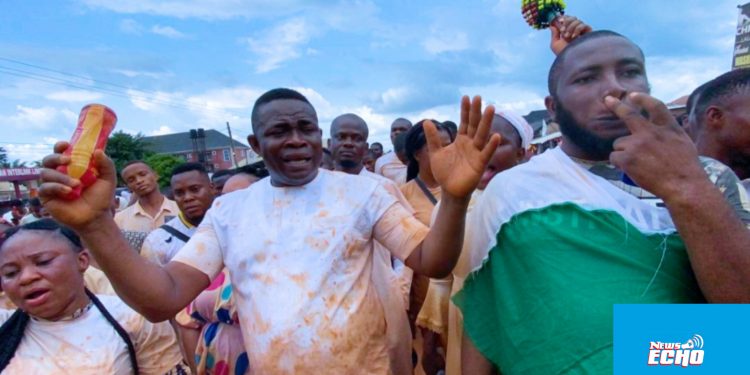 Prophet Dom Daniel leading the protest, appealing to the Imo State government on the bad state of the Nekede, Ihiagwa Road Owerri

0
SHARES
77
VIEWS
Share on FacebookShare on TwitterShare on Linkedin

Worried over bad roads across Imo State, General Overseer, Miraculous Deliverance Gospel Mission, Ihiagwa, Owerri West Local Government Area, Prophet Dom Daniel, has led a protest, appealing to Imo State Government to urgently repair the Nekede/Ihiagwa Road to ease traffic and reduce suffering.
Leading the peaceful protest recently, on the bad road, the cleric frowned politicians who have been giving deaf ears to the plight of the people, saying the major road which connects Federal Polytechnic, Nekede and Federal University of Technology, Owerri, has been deplorable for 20 years.
The cleric who is also a movie producer, pleaded with Governor Hope Uzodinma to come to the help of residents of the area to reduce suffering and hardship the poor state of road had caused them.
He said the protest was not politically motivated, reminding that purposeful leadership is germane to economic growth, good living, peace and orderliness.