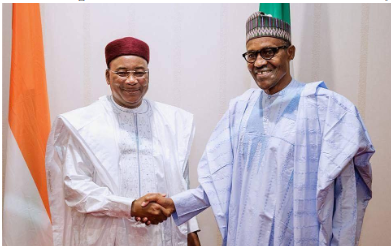 Following recent developments in the support President Muhammadu Buhari is lending to the neighbouring Niger Republic, Nigerians are posing the question “what is the president’s interest in the small country.”

This is in the light of what appears to be a focused development agenda of the president for the country which has left Buhari’s many states short changed. Many are now wondering if Niger Republic is now an appendage of Nigeria or if there is any plan to annex the neighbour.

In the absence of any government explanations speculations are rife and many are insinuating different intentions and purposes as plausible reasons for the President’s entrenched interest. There are as well some established facts as pointers

It was learnt that on securing his electoral victory in 2015, the very first place Buhari visited to celebrate his triumph is Niger where he was giving a rousing red carpet reception described as the highest honour ever that can come from that land.

The issues that agitate the minds of Nigerians especially those from the Southern part include the investments flowing towards Niger Republic, the influx of Fulani from the west African countries, the rail line from Maradi to Daura, the crude oil supply agreement from Niger Republic to Kaduna, the refinery construction on the border between Daura and Maradi, the refined products supply from Niger to Nigeria.

Another matter of concern is the discriminatory policy of the Buhari administration in securing the country through the borders. When the federal government shut down the country’s borders to check insecurity and economic sabotage, the effort was negated by the keeping of Niger-Nigeria border open. While the government pretends to be controlling issues at the southern end as per the Seme borders, the irregularities mounted at the northern border.

What is the reason for the double standard? Why would such irregularities be allowed to occur at the axis of the president’s home town? Daura, Buhari’s home is just few metres away from Niger Republic. It is this same double standard which allows Zamfara government to sell and collect royalties of gold mined in their state which contrasts the country’s code on mining solid minerals.

That has consequently fuelled agitations from the South-South governors and their indigenes calling for a level playing field to allow them take control of their resources too. There is concern already that if they are to press further their demands and the federal government remains adamant, there is likely to be a dislocation in the economy.

Espousing on the entrenched interest of PMB in the neigbouring state, one Chijioke Onah writing through his social media handle took Buhari to task on specific issues and projects within the period he had promised to elevate the country. In the said reported account he had queried if Buhari is from Niger Republic or Nigeria.

The queries are as stated below
“Is Buhari from Niger Republic or Nigeria?
“I will build 4 Refineries in my 4 years tenure – Major General M.Buhari.

In what looks like a response to the question of Buhari’s interest got attention in the following comment from Baron Roy, another social commentator also writing through his social media handle. Summing up his experience in a business trip in Ghana was the discovery of the strong bond between the Hausa’s and the Fulani’s among themselves. According to him,

“The Hausa and Fulani in Ghana, Togo, Benin Republic, Niger, and Nigeria do play the national politics of their official countries, but do not see themselves as from different countries in reality! What this means is that the artificial boundaries drawn up by the Europeans in 1896 are not recognized by them in their hearts;

they only take advantage of those artificial boundaries to further their empire but do not actually respect them. The Hausa or Fulani in Bauchi is more culturally attached to his kinsman from Niger and Togo far ahead of his attachment to the Igbo or Yoruba!”

Explaining the reason behind the bond Roy had this to say again:

“The bond between Niger Republic and the core North of Nigeria is stronger than the binding forces of natural magnets! For all intents and purposes, Niger Republic, Chad Republic, Northern Ghana, Northern Togo, northern Benin and Northern Cameroun are bound by culture, religion, philosophy and all have you to Northern Nigeria!

This vast area would have been one giant official country that would compete with Saudi Arabia in influence and riches! The Europeans came along and destroyed that great Empire with their cunning! But that Empire is not done yet; they’re rebuilding it with the epicenter in Northern Nigeria.

And the wealth of the South, under the sham arrangement of 1914, is being used now to accelerate the reemergence of a vast Empire of the Western Sudan, with the Fulani at the apex!”

Some occurrences within the polity now and in the first coming of Buhari as head of state appear to lend credence to the above assertions. First is the issue of the much controverted case of where Buhari comes from. It is argued in some quarters that he is a Nigerien and that principally accounts for the interest and why he is extending support to his kinsmen. Speaking on this Roy argued that
“We’ve had several Heads of States that were never Nigerians in the true sense! Even Mr. Buhari’s father was NOT a Nigerian  (Kanuri); Mr. Buhari’s father was a poultry trader from Maradi in Niger Republic. He traded “ducks” between Maradi and Daura (he was called Mai-agwagwa…the Duck Trader) and fell in love with his wife with whom Mr. Buhari was sired! But the young Mohamadu grew up with his mother’s people in Daura and became Nigerian! So our “dear” president is actually from Niger Republic by parentage but a Nigerian through his mother…or by birth.”

It is also reported that this is never the first time that Buhari has identified with kinsmen in Niger to the detriment of Nigerian interest. Accounts indicate that when he functioned as the military junta, head of state, he had voted a Nigerien in the then Organization of African Unity (OAU) now African Union (AU) as the Secretary General against Nigeria’s Peter Onu, a Nigerian Igbo. This was said to have shocked other African heads of state, especially Nyerere of Tanzania who wondered at the level of such unpatriotic act.

We are aware of the reported case sometimes ago credited to the federal which sought to grant free visas to all fulanis into Nigeria from where ever they may be coming from. This was given vent to by the Bauchi State governor, Bala Mohammed who in a live program at Channel Television declared openly that “they are trying to bring every Fulani in Africa together because they don’t have nationalities.”

According to him, ‘We are trying to bring all the Fulani in one fold and try to arrest their traditional practice of moving from one place to the other. The Fulani man is a global or African person. He moves from Gambia, to Senegal and his nationality is just a Fulani man.”

What more could demonstrate the bond between the Fulani’s if they can nurse the mind of bringing themselves together under one umbrella nation and they are not hiding it nor are they mindful of the inconveniences it may bring to other constituent ethnic group especially in an era of acute scarce resources. Since their sojourn there is reported increase in crime wave all over the nation manifesting in banditry, boko haram, herdsmen attack, kidnappers, armed robbery, etc.

The news of the importation of petroleum products from Niger Republic hit many Nigerians with shock. They have wondered what wonders the petit country had performed which Nigeria claiming the giant of Africa could not do with all its resources incomparable with what can be found in the tiny country.

Besides many also credit the ability of Buhari to deliver such massive support to Niger Republic over the nonchalant attitude of the National Assembly to call him to order. It is doubtful if the sums applied to deliver such huge projects got the blessings of the NASS and if they are what are attendant economic benefits that accrue to the nation. Nnanna Ochereoma, a columnist with the Vanguard newspaper seems to locate the answer in the following lines.

“What “magic” is Niger employing to refine petroleum that Nigeria’s President and Oil Minister, Buhari, cannot deploy in Nigeria? Why aren’t Nigerians complaining about Buhari’s incompetence as Oil Minister and the use of Nigeria’s largely borrowed funds to develop his father’s country when our own infrastructural deficits are among the world’s worst? The $1.9bn railway line to Maradi was never taken to the National Assembly for approval; it was an act of naked impunity. It is an impeachable offence, but who will bell the cat?

“Buhari is using our scarce, borrowed resources to service his cross-border selfish interests with resources mined mainly from the Niger Delta and the Lagos business districts. He is going beyond developing Northern Nigeria; he is working for Niger Republic too. Is this regime all about Buhari’s interests? And why are Nigerians who will repay the loans letting him get away with these?

Many Nigerians are terribly worried over this unhealthy development which had sought to develop other nations while many of the states in Nigeria especially in the South East remain undeveloped. The real reason the NASS members have remained quiet on this issue is something to ponder.

I am not behind 2023 campaign Poster – Anyim