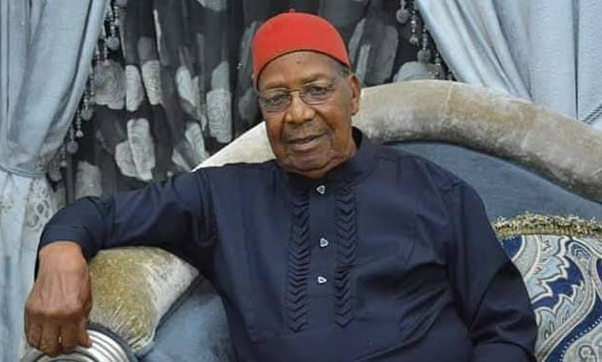 One of the remaining the Zikist Movement and father of Nigerian politics, Chief Mbazuluike Amechi, has said the former governor of old Anambra State, Senator Jim Nwobodo, should not be taken seriously politically.

According to the First Republic Aviation Minister, “most of the trouble we have in Nigeria between the North and the Igbo have a touch of Jim Nwobodo”. The duo (Amechi and Nwobodo) have been in a war of words following the performance of South-East governors and other issues pertaining to the south-east.

“I do not think I personally take Nwobodo seriously in Nigerian politics because most of the trouble we have in Nigeria between the North and the Igbo have a touch of Jim Nwobodo,” Amechi said. “I wish you can hear me well because I really want to talk to you on that.

“I said the trouble between the North and the Igbo has its origin and Nwobodo played a very big role in the min 1978/79. I negotiated the formation of alliance between the National Party of Nigeria, NPN and Nigerian Peoples Party, NPP. “Now, after the election, Nwobodo won on the platform of NPP and in Imo State, Chief Sam Mbakwe won and the man in Jos, Solomon Lar, won in Plateau State. Zik used his position with the North to forge an alliance between the NPP and the NPN in the formation of the Federal Government of 1979.

“Again, Nwobodo won the second term election. Mbakwe and Solomon Lar also won in 1982/83. Jim Nwobodo again went and brought alliance between Zik and Awolowo and I told Zik that there was no way it would work, that he should not break the alliance he had with the NPN. “But they formed their progressives and it was the same Nwobo do that engineered that and it failed. “While Nwobodo was enjoying his governorship in his second term, he lost to Christian Omoh who became governor of Old Anambra State. Throughout the time Nwobodo was a member of NPP, he was never consistent.“ Under former President Goodluck Jonathan, he joined the All Progressives Congress, APC. He is an opportunist. He wants wherever he will gain personally. So, when he talks on matters of life in politics, I don’t take him seriously.”