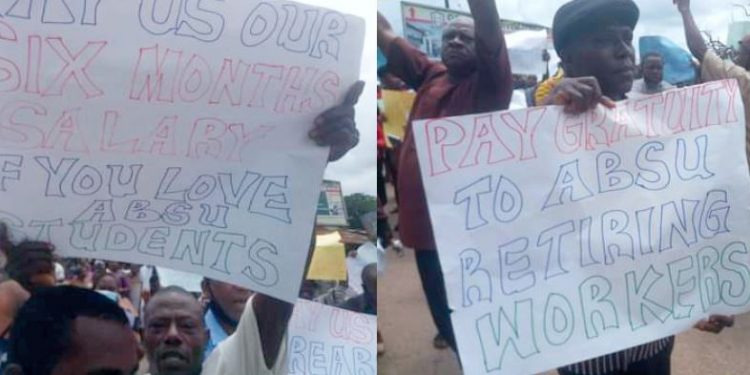 Academic and non academic staff of Abia State University, Uturu Monday, 28 September staged a protest in the school community against alleged non-payment of their six-month salaries by the school’s management.

They also regretted that the lecturers and other staff were abandoned to fate since the outbreak of global Coronavirus pandemic, describing the situation as wicked and unfortunate.

In a release signed by ASUU Chairman, Dr V. U. Nkemdirim, Mr Ezichi Ojo, Canice Onuoha and Okoro Ndimele, on behalf of various unions in the school and made available to journalists, the staff expressed dismay that they had been subjected to beggars, despite their sacrifices in research during the Corona virus pandemic.

The statement read in part, “the plight of the staff of Abia State University, Uturu is such that some staff have been compelled to engage themselves in several menial jobs to supplement the proceeds from begging.”

Singing songs of sorrow and holding placards worded with various demands, the ABSU staff made it known that their check-off dues were never paid, despite being deducted from source, adding that gratuities of retired staff were not also paid.

They concluded that the school may not reopen for any academic activity unless their travails were attended to. Some other unions that joined ASUU in the protest included non-academic staff of other institutions, National Association of Technologists and Senior Staff Association of Universities.

Effort to speak with the new Registrar and former Public Relations Officer of the school, Mr Acho Elendu was not successful as text messages forwarded to to him on the protest remained unresponded at the time of this report.