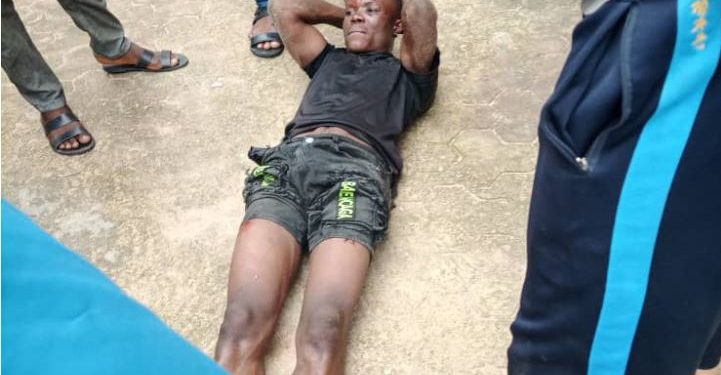 One of the 3 suspects caught in the house break at Ikenegbu layout, Owerri, laid on the floor.

Sunday when worshippers went to commune with their God in their respective churches was found good by three young men to burgle a flat at a house at the Ikenegbu Layout of Owerri, the capital city of Imo state.

However, luck ran out of them when the eagle eyes of neighbours caught attention in their operation. According to a neighbour’s daughter, “from our flat we saw them when they entered and we were watching them before we raised alarm”

Three boys had invaded a flat in the second floor at No 6 Onukogu Street, Ikenegbu Layout, Owerri in the absence of the inmates who had gone to church for worship.

When News Echo visited the scene, one of the thieves was caught while the other two still hid in the house in the ceiling as they were not found in the room. When police arrived at the scene they took over search of the entire building to fish out the two suspects.

The man caught claimed that he hailed from Ekwe in Isu local government area of Imo State and was a barrow pusher. He denied their use of gun as the occupants expressed worry but admitted using what he called a master key to unlock the flat.

Police stopped further interrogation and beating of the arrested suspect by people in the area. There were reports that thieves had constantly raided houses in the area at odd hours removing people’s valuables.
Some residents of the area expressed happiness at the incident as they recounted some of their items that were stolen without trace alleging that it must be the gang.