2023 presidency: Can Amaechi go for Ndigbo? 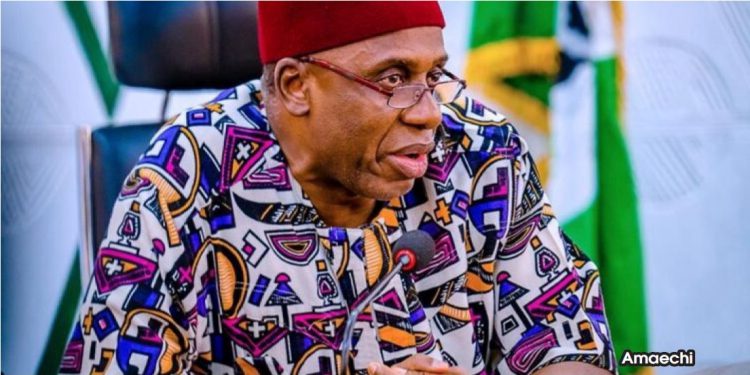 The under current political dynamics concerning the 2023 presidential election is already gathering momentum.

For now, the elements in APC are exploring various avenues for considerations. Investigations conducted by our reporters revealed that, at the moment, there are about six big chiefs jostling for the APC presidential ticket. The most visible among them are Governor El Nasir Rufai of Kaduna State, Asiwaju Ahmed Bola Tinubu and Chief Rotimi Amaechi.

Since there is the stringent call for an Igbo President of Nigeria in 2023, and as it appears that Amaechi is now very popular and strong in the ruling APC party, can he take the Igbo slot in 2023?

Amaechi is from the Igbo speaking area of Rivers State and he speaks Igbo fluently, wears Igbo traditional regalia eats Igbo food and is seeing among Igbo social circles.
However, there is a growing concern about the stand of South South Igbo whose dual identity can no longer be pinned as totally Igbo in principle and practice.

According to Eze Madu, a political commentator, most Rivers and Delta Igbo no longer identify with the South East Igbo for obvious reasons. He said, “Unless you don’t want to be honest enough, the truth is that most South South Igbo no longer see themselves as Igbo people. This had been the trend since the Nigeria -Biafra War ended. Nigeria now favours them ahead of South East Igbo. In view of that, most of them do not see themselves as Igbo. You see it in the way they treat those of from the South East. This is the only problem I have with Amaechi taking the slot of the Igbo presidency in 2023”.

In dissecting this discourse, a lawyer, Barrister Chimachiuche Nwanjokunta enthused thus: “The fact is that Amaechi is a fully fledged Igbo from South South, Rivers to be precise. He has the same equal rights with the rest of the Igbo in the South East. His name is very clear on this – Chibuike Amaechi. It is the issue of artificial boundaries which usually take place during state creations that took away people like Amaechi from South East and landed them in the South South geo political zone.

As a matter of fact, majority of Ndigbo from South East are favourably disposed to Amaechi taking the position of Igbo president in 2023. What are their reasons? Nwanjokunta added, “Let the truth be told, both the South East and South South are in mutual suspicion of each other. The South South claims the South East leaders of Dr Nnamdi Azikiwe, General Aguiyi Ironsi and Michael Okpara discriminated against them when they were at the helms of affairs at the centre and at old Eastern Region. On the other hand, the South East says the South South has not been very accommodating. Look at this: the South East was alarmed that the only region where Ndigbo’s property were declared abandoned was in Port Harcourt, Rivers State in South South. Two, Ndigbo are also not comfortable that the late Ogoni leader, Ken Saro Wiwa, played along the federal side than going the way of Biafra.

“Again, do not forget that after the war, the South South leaders, particularly in Port Harcourt, changed the names of roads and streets from Umu to Rumu. And that is why you have Rumuola instead of Umuola, Oyigbo rather Obigbo. Also, in the Second Republic, then Governor Milford Okilo led his people of Rivers State which now also has Bayelsa State to NPN while shunning Zik and NPP. It was the same with Clement Isong who also never identified with Zik and NPP but also went North with NPN. Twice, Rivers delegates led by Dr. Peter Odili never voted for Dr Alex Ekwueme in the PDP presidential convention in Jos and Abuja. Looking at this, you can see reasons Ndigbo seem to be against Amaechi for the 2023 Igbo president of Nigeria”.

Imo North election: not a do or die affair, says NRM Candidate

Can Waltersmith Modular Refinery last the test of time?