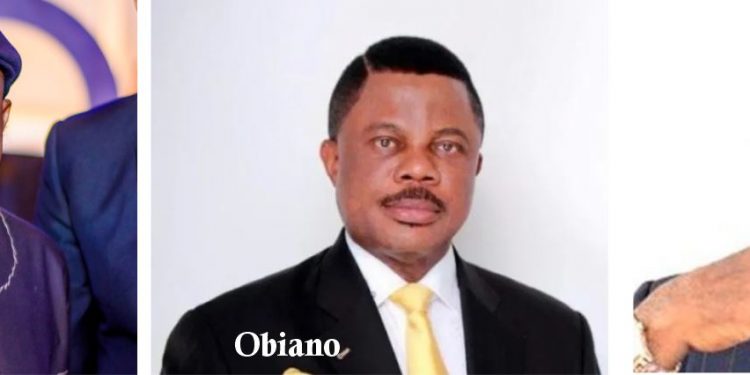 For few months the government of Anambra state and one of the oil mogul, Prince Arthur Eze of Ukpo community has been on logger heads. Of a truth, Prince Arthurs philanthropic gestures know no bounds, and many have testified to his generosity. known to be a political godfather to many politicians across Nigeria and in Africa, where he openly boasts of having installed a number of governors in Nigeria and three heads of states across Africa.

Recently, Prince Eze seems to have decided to openly involve himself in politics, instead of sponsoring people to public offices as he is wont to do, and two persons have suffered from such position. First is a former secretary to the government of the federation, Senator Anyim Pius Anyim, and second, Governor Obiano.

The rift between the two Anambra great sons started during the inauguration of the Zonal Police Headquarters, when Eze revealed that Obiano was in Abuja in attempt to influence police authorities to move the establishment to his local community in Aguleri, Anambra East Local government.

According to Eze said, “Governor Obiano wanted it to be sited in Aguleri, his hometown. Aguleri and Umueri are fighting war for many years, killing themselves. They are not in good terms. He has never reconciled them. He was talking about where to site zone 13. The most important thing is for him to reconcile Aguleri and Umueri communities. They are still fighting up till today.

“The point is that I didn’t even fight. I didn’t have the impression that I was fighting but when I heard that Obiano wrote petition against me, I knew that there was war. I thought that he could have been happy we brought it to the centre. From here to his place is less than seven minutes; from here to Onitsha is seven minutes.
“I thought that we were working together until I heard that he went to Abuja to spray money. Some people threw him out. The other man told him, ‘Take this bag (money) you kept there. I don’t want to take it.

Though Obiano applied tact and carefully avoided replying Eze’s accusations, his media aides took to the social media to deride Eze, with some saying his wealth was useless to the state as he neither has meaningful investment in the state, nor can he claim to be employer of anyone in the state, despite his wealth.

But, Eze, as if aware of the circumstance surrounding him, launched another attack, claiming that Obiano was misusing local government funds, and that he was going to sue him (Obiano) for that.

In a later meeting with traditional rulers Eze equally stated that, “During the Abacha era, there was a law for all state governors to reserve five per cent of the state’s revenue for the traditional institution. Go to the north, they are paying, even in Enugu, the governor is paying, but here, Obiano is not paying. I will drag him to court for that.”

Arthur’s attack on the governor has however seemed to have pushed Obiano, in what looked like touching the lion by the tail, suspended the monarch of Ukwulu Kingdom, Igwe Peter Uyanwa, who hosted Eze and other monarchs at a meeting where Eze threatened to sue Obiano.

A release signed by the Commissioner for Information and Public Enlightenment, Mr. C. Don Adinuba said, “Following a series of petitions against the Traditional Ruler of Ukwulu in Njikoka Local Government Area from many people in Ukwulu and elsewhere, who want to forestall an impending huge crisis in the community, the Anambra State Government has decided to suspend Chief Peter Uyanwa as the Igwe of Ukwulu for one year with effect from Friday, July 24, 2020, in the first instance. “His Certificate of Recognition as Igwe is also withdrawn with immediate effect. Consequently, Chief Uyanwa can no longer function as Chairman of the Traditional Rulers Council, Anambra Central Zone.

The tussle, however, entered a different phase, when on hearing of the suspension, Eze led a delegation of monarchs from all parts of the state to visit the embattled traditional rulers in his palace. Eze noted that the suspension was an indication that Obiano had declared war on him.

However, in what could be an angered mind sent strong warning to the state governor. “Go and tell him (Obiano) that we are the people that make governors. He is fighting a lost battle. The people of Ukwulu installed the monarch and not government, so he can not remove someone he did not make a king,” Eze declared.

Eze also added: “I have been in and around government since 1970, and within that period I have made many governors in Nigeria. Since Obiano is not ready to pay you people (traditional rulers), I shall be giving N200,000 each to all monarchs in the state every month. I shall also give N10m to former LGA chairmen to pursue their matter in court, against the governor for removing them before the expiration of their tenure.”

Seeing Eze as an influential personality, the Anambra State governor has so far handled him with care, trying not to launch any direct attack on him. The state government through the chief press secretary to the governor, Mr. James Eze, in a recent press release insisted that the suspension of the monarch by Obiano was the right thing to do, because of the many petitions against the monarch, which could lead to unrest in the community.

Eze warned against Ukwulu monarch resisting the suspension, reminding that no monarch could stand the power of the state government.

“It is therefore easy to see why Emir Sanusi Lamido Sanusi, who was a First Class traditional ruler in Nigeria, stood no chance at all against the executive wrath of Governor Gadnuje of Kano State.

Arthur in a bid to compensate the 12 igwes, bought and issued them with brand new innonson jeeps. Obiano on his own also acquired 144 jeeps in return to those who did not embark on the journey to Abuja. Indeed, when two elephants fights the grass suffers. To my own opinion I think that with the way things are going, the Igwes will derail from their proposed leadership steps as expected of them.

Currently as the battle progresses, most people have called for peace between Eze and the governor. Southeast governors had earlier waded into Eze/Anyim feud, calling for a ceasefire. Notable among them is the SouthEast Elder’s Forum who have made frantic effort to appointing a peace committee that will see to the end of the tussle.

More so, Mr Jachi Aghara a political analyst said, “There is need to intervene between the governor and Arthur Eze before it lets into something else. I understand Eze’s position, he is someone who does not like to see the people suffer, and he believes that Obiano’s style of governance, especially with the non-conduct of election was making the people suffer. I know that the bone of contention between both men is primarily the non-conduct of local government election.

“This has also been settled before by former Chief Judge of Anambra State, Justice Peter Umeadi, who while presiding over a state High Court had in 2017 sacked the local government caretaker chairmen and councilors appointed by Governor Willie Obiano, declaring their appointment as unconstitutional. Justice Peter Umeadi then had ordered the Anambra State Independent Electoral Commission to conduct local government election in the state within 90 days of the judgment.

News Echo gathered that the non-conduct of the local government election since after the last set of chairmen and councilors were removed shortly after Obiano came to office for his first term was because the matter has remained in court.

Those discordant tunes from Imo speaker

Those discordant tunes from Imo speaker

My aspirations have paved way to greater heights in women folk – Mrs. Asobi

Blast from the past – The way we were