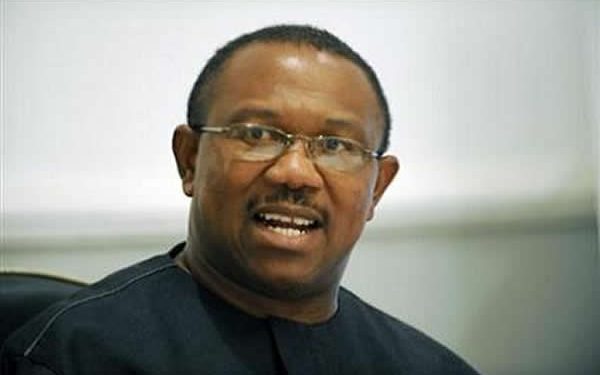 Permutations begin, NNPP, APGA, LP, SDP mooted
We had raised more than N2.5 billion to settle delegates – Prophet
Defection a chance for Nigerians to unite under another party – Mr Macaroni

The abrupt departure of Mr. Peter Obi from the 2023 presidential run under the platform of the Peoples Democratic Party, PDP, has shocked Prophet Godfrey Gbujie of the Ministerial Leader of the World Zionist Union in the South-East.

On May 18, 2022, the famous prophet announced that God had revealed to him that the former presidential candidate will be given the PDP ticket to run for president in 2023.
Obi, on the other hand, announced his departure from the main opposition party and withdrawal from the presidential contest on Wednesday.

The Prophet expressed his surprise at the news on Thursday disclosing that he was astonished when he heard it.
He said that the former contender did not consult widely before submitting his resignation letter, claiming that God had already approved Obi’s candidacy.

He said, “I must say that I am shocked by the sudden withdrawal of Peter Obi from the PDP, his action could be likened to that of King Saul of Israel in the Bible shortly after he was made king.
“Obi did not consult many stakeholders within and outside the PDP before he threw in the towel in a venture God had already endorsed him.

“I do know that a group backing his presidential aspiration on the platform of the PDP as of early Wednesday had raised more than N2.5 billion and other meetings were selected for Wednesday evening and on Thursday before a sudden news of his withdrawal came”. Peter Obi, the former governor of Anambra State and a presidential candidate, will unveil his new political party in the next 24 hours.

Senator Iyorchia Ayu, the National Chairman of the Peoples Democratic Party (PDP), received Obi’s resignation letter on Wednesday.
After failing to get a majority of delegates to his side ahead of the PDP special convention to determine its presidential candidate for the 2023 general elections, the former Anambra governor left the main opposition party.

Peter Obi said: “It has been a great honour to contribute to nation-building efforts through our party. Unfortunately, recent developments within our party make it practically impossible to continue participating and making such constructive contributions.

“Our national challenges are deep-seated and require that we each make profound sacrifices towards reducing our country. My commitments to rescuing Nigeria remains firm, even if the route differs.”
According to Anaedoonline.ng, the financial guru is currently looking at several political parties to see if he can land a presidential ticket with one of them.

Obi, who is popular among young people, is said to be in negotiations with the Labour Party, the Social Democratic Party (SDP), and Senator Rabiu Musa Kwankwaso’s New Nigeria Peoples Party (NNPP).
“We are in talks with Labour Party, SDP and a few others. We will announce our new party in the next 24 hours. It will be a party that is also youth-friendly since we have discovered that the youths form the bulk of our supporters,” said an associate of the former governor told Newsmen.

It was also learnt that Peter Obi is looking to join a coalition that could defeat the PDP and the All Progressives Congress (APC) in next year’s election.
“There is a plan for some major parties to form a mega party although this is coming quite late. Discussions are still ongoing but Obi is expected to be the presidential candidate. Kwankwaso is also part of the discussions. Everything will be clear by Thursday,” said a chieftain of the PDP.

Mr Macaroni, a Nigerian comedian and content producer, has suggested that the defection of Peter Obi, a presidential contestant from the Peoples Democratic Party (PDP), offers a chance for the population to gather around another party.

Mr Macoroni made the statement in a tweet in response to the former governor’s resignation from the PDP.
Mr Macaroni reacted to the news by telling youngsters that they can break the narrative that only the PDP and APC can win elections.
He advised Nigerian youngsters that Obi’s defection was an opportunity to unite, and that other parties should follow in the footsteps of the APC and PDP.
He wrote; “Alot of people pushed the narrative that only APC and PDP can win Elections even when some of us said we can change this narrative. We were mocked. People kept praising these 2 parties. Now we want to join the other parties that we have already made less popular.
“I hope we all realize that we can indeed change this narrative of its only PDP and APC and take advantage while we can. These parties don try. Make others sef come try.. We will be mocked but if truly the people are tired, The PEOPLE can change this narrative!!

“Finally, the motivation for us as the people who wish to rally around another party should not be because someone left PDP or APC. It should be because we are tired and because we want better. Because if na by that one, more Giants will leave APC and PDP soon… I rest my case”

Meanwhile, Adamu Garba, a presidential candidate for the Young Progressive Party (YPP) in 2023, has sparked outrage on social media after making a remark regarding Peter Obi’s resignation from the Peoples Democratic Party, PDP.

Obi handed his resignation letter to Senator Iyorchia Ayu, the PDP’s National Chairman, on Wednesday, May 25, 2022, according to Anaedoonline.ng.
After failing to win over the majority of delegates to his side ahead of the PDP special convention to determine its presidential candidate for the 2023 general elections, the former Anambra governor left the main opposition party.

Hours after Obi’s announcement of his withdrawal from the PDP, Adamu Garba who also recently withdraw his membership and presidential bid from the ruling All Progressives Congress, APC, said the latter, followed his footstep in handling major political parties.

Garba mentioned this on the microblogging platform, Twitter. The tweet reads: “Peter Obi has copied from Adamu Garba’s template of handling the major political parties. Excellent!
Garba’s comment has since generated reactions on the bird app as citizens aired their different opinions.
See some of the reactions below:

“Which template actually. U mean running from one party to the other or requesting for funds from the poor masses?” a Twitter user [Cathy Angel – @CathyAn92755118] asked Garba.
Replying to the tweep, the Presidential aspirant said: “Both”.
Cathy again replied to Garba saying: “We are tired of all this nah. We don’t need a superman as president anymore, we only need a working system.”

Another netizen, David Harts [@DavidHarts2] “Peter Obi has never mentioned you before: shows he doesn’t know someone like you exists. Meanwhile, you knowing everything about his movement means he’s like a god to you.”

Slamming the presidential aspirant, one Ju E [@Ju_sapphire] wrote: “What a comparison. How can u compare a school dropout and a graduate?? Just because they both attended same school doesn’t make them equals.”
Mocking Garba on how he had begged for money to purchase presidential form while in APC, a Twitter user Hojay Omobabalefty [@omobabalefty] wrote: “You can never compare yourself to Peter Obi… You that did not see money to obtain APC nomination form, coming here to cook another story”.