...set to commence mop-up of stray 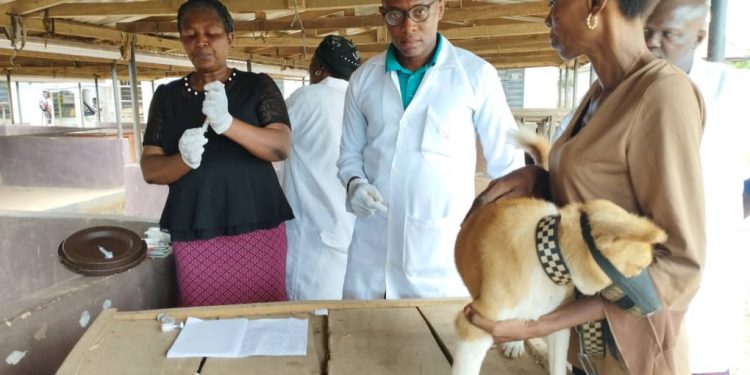 The exercise, officially inaugurated by the Anambra State Government last week, is aimed at achieving free Rabies society by 2030.
Monitoring the compliance level and general conduct of the exercise in the council area, a monitoring team from the state Ministry of Agriculture, led by the Director, Veterinary Services, Dr. Basil Ideh disclosed that after the campaign, the state government will commence mop-up of stray dogs across communities.

While charging dog keepers to ensure that their dogs are vaccinated every year, Dr. Ideh made them understand that Rabies is a vaccine preventable disease.
Also speaking, the Area Veterinary Officer for Orumba North Council Area, Dr. Ugochukwu Ezeonuegbu, said that the exercise, planned on community by community level, has successfully covered, Ufuma and Omogho Communities, while Nanka and Awgbu Communities will take their turns next week as most communities in the council area do not allow dog keeping.

Dr Ezeonuegbu, who lauded the enthusiasm of dog keepers to vaccinate their dogs, announced that the free Anti-Rabies Vaccination Camping will officially end on October five 2022.

Some of the dog keepers, whose dogs were vaccinated, including Mr. Chibuzo Okeke, Mrs. Ifeoma Okeke and Mrs. Grace Nwankwor, applauded the Anambra State Government for availing them the opportunity to vaccinate their dogs free of cost.
The exercise climaxed with a roll call of the dogs starting with Mali, Kebbi, Willy, Pal, Whisky, among others, with exhibitions of intellectual behaviours.