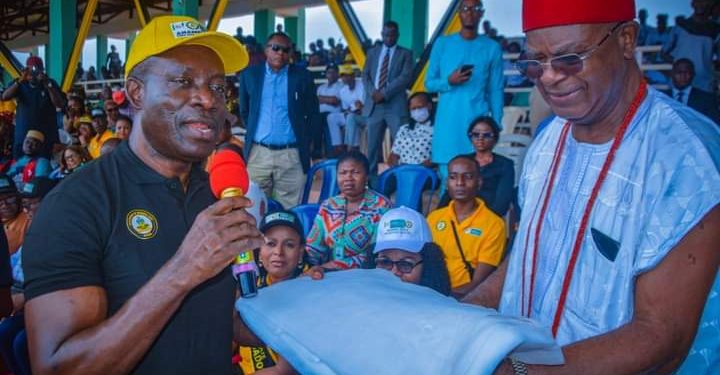 Anambra State Government in collaboration with the National Malaria Elimination Programme (NMEP), and Malaria Consortium (MC) with support from GiveWell Open Philanthropic funding, on Sunday commenced distribution of 3.8 million insecticide treated nets through a door-to-door approach in all Anambra communities. News Echo reports that the effort is to eliminate malaria in the state.

This was earlier disclosed at a media orientation on Insecticide Treated Nets (ITN) distribution at the Conference Hall of Anambra State Ministry of Health,last Friday, the State Commissioner for Health, Dr. Afam Obidike, represented by the Director of Public Health, Dr Afam Cyril Anaeme said the media roundtable was necessary for Ndi Anambra to be well sensitized of programme. The Commissioner, who said the objective of the ITN mass campaign is to ensure that “for every two persons in Anambra State, there is one bed-net to sleep inside” urged households to ensure that they have someone at home to collect the nets. According to him, household registration and simultaneous distribution of net will commence from August 7 to August 17, 2022.

He said the 2022 Insecticide Treated Nets (ITNs) mass distribution is free for every household in the state. “The newly collected nets must be aired under a shade for 24hrs before hanging and sleeping inside. Bring down the old nets and hang the new ones. “The mass distribution is led by the Anambra State Ministry of Health through the State Malaria Elimination Programme with Malaria Consortium providing technical support as the implementing partner”, he stated. The commissioner maintained that despite the challenges posed by the rainy season and others, they have succeded in moving the nets to all the 21 local government area of the state and urged residents of the state to cooperate with those recruited for the distribution. Contributing, the ITN Campaign Manager for Malaria Consortium, Mrs. Laitan Adeniyi, advised ndi Anambra to desist from using the net for other purposes as witnessed in the past.

One of the facilitators and Drug Demand Consultant, Malaria Consortium, Farouk Mohammed, urged the media to keep malaria issues on the front burner and provide adequate publicity before, during and after the campaign.

Also, the Technical Worksroom Adviser, Malaria Consortium, Dr Titi Akinlalu, who gave an overview of ITNs Campaign process disclosed that they have done the micro and macro planning processes for the exercise, adding that the distribution process, which will commence on Sunday, will be followed by a post implementation process and urged the media to follow the processes in order to educate the public better. The sate Malaria Programme Manager, Nonso Ndibe, who observed that the last nets were disributed in the state was in 2014, advised residents to use the nets for the right purpose to help eliminate malaria in the state.