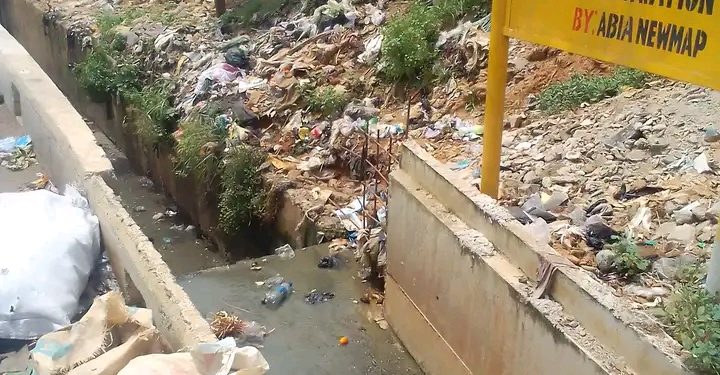 Some pictures of NEWMAP projects in Aba

Centre for Human Rights Advocacy and Wholesome Society (CEHRAWS) on Monday charged the Abia State government to look into some projects being executed by the Nigeria Erosion and Watershed Management Project (NEWMAP) in the state, stressing that some of the projects are causing more trouble than good for residents.

News Echo gathered that residents of Obohia Road, Ozuomba Street, Ohazu Road, Ohanku Road, Crystal Park Road, Uratta Road and many roads affected by the NEWMAP projects are already planning of relocating because the yet to be connected drains that ought to send stormwater to Aba River are currently sending the stormwater to streets and homes in those areas.

CEHRAWS, therefore, called on the Abia government to urgently act on the deplorable state of Aba and consequently, the suffering of residents, especially in this rainy season, as NEWMAP projects meant to reduce suffering is currently adding more sorrow due to how they are being handled.

CEHRAWS, a civil rights group, committed to the entrenchment of good governance, respect for the rule of law and protection of the Universal Human Rights of Nigerians, and Abia people, in particular, said the situation of some construction sites under NEWMAP is becoming alarming.

Okoye Chuka Peter, Executive Director of CEHRAWS said that the group had an On-the-Spot-Assessment of the ongoing NEWMAP, a project which is World Bank assisted in some areas of Aba which is aimed at flood mitigation but saw more suffering among residents.

Okoye said that the group appreciates the presence of NEWMAP and the projects, but said that the quality work at the just reconstructed Ngwa Road has facilitated the emergence of flood at some points, causing homes to be submerged and properties destroyed.

Okoye said that residents of Ohanku Road, which adjoins Ngwa Road at the densely populated Ndiegoro axis of Aba are not spared of the horrific experience, as lots of buildings have been submerged and residents displaced as well following the menace of the projects.

According to him, “This unpleasant incident which is so pathetic and uncalled-for based on the fact that the said project is being powered with the 58 million US Dollars World Bank Intervention Fund made available to the government of Abia State in 2017.

“Other unpleasant issues raised by the residents of Ngwa Road during the visit are the destruction of the old culverts and the permanent blockage of the adjoining streets, thereby depriving residents of so major streets within Ngwa road access to the newly reconstructed road (Ngwa Road).

“This has led to the disconnection of some buildings at the tail end of Ngwa Road, where the road links to an adjoining road (Akoli Uzoiyi Street) which is another broad link to Ohanku Road cutting across other adjoining streets like Nwofor, Ndusoro, Uzuitem, Mbubo, Item road etc;

“Therefore, making this monumental project uncompleted and somewhat a sabotage to the immortalization of the only road that bears the name ‘Ngwa’ in this State.”

He said that reported facts on the ground show that the unprofessional approach of the construction company(ies) handling the project(s), has left the roads, especially the popular Ngwa Road which deserves utmost professional attention to ensure its immortalization in a pitiable state.

“CEHRAWS is disappointed at the speedy erection of permanent structures on the aforesaid abandoned part of Ngwa Road which is being championed by the Good-Morning Market leadership who is alleged to have the approval of the traditional ruler of the community, the Aba South Town Planning Authority and the Abia State Ministry of Trade and Investment.”Certainly, it is difficult to believe the complicity allegation and purported sales of sanitary lanes to some gullible house owners for the erection of permanent structures by the Aba South Town Planning Authority.

“But if the allegation is later ascertained to be true, then it becomes obvious that these persons/institutions are among those sabotaging Governor Okezie Victor Ikpeazu’s dogged efforts to save Aba (the heartbeat of ala Igbo, economic hub of Abia and the pride of Ngwa clan) from ruination,” he said.

Okoye said that there is also immense apprehension over the ongoing giant drainage construction work at Chrystal Park Road which poses a serious threat to the buildings therein, as a result of poor handling of the project.

He said that as it stands presently, the ongoing job contradicts the earlier details made available to the public by a representative of NEWMAP during a radio talk show in Aba.

“The Underground Tunnel Dredging Equipment proposed for the job, which according to NEWMAP had been paid for, and was already on its way to Nigeria from Israel has never been sighted anywhere around the project area. Is it possible that the amount budgeted for the said equipment has been misappropriated?

“That will eliminate the complaints and fear being expressed by the residents of Aba. In addition, the indicted stakeholders and government agencies should urgently refute the said allegations publicly, and join forces to correct the ugly situation.

“Government should consider immortalizing Ngwa Road. For a start towards this, the contractor should be compelled to give the road an urgent and professional touch, and also as a matter of urgency, connect it to the aforesaid adjoining roads to ease the sufferings of the residents.”

Meanwhile, Barr Bob Ogu, the commissioner for works who spoke on a Radio Programme in Aba today explained that the government had the challenge of moving water from the two ponds, Uratta and Umuagbai and from Umuagbai to Aba River which is the plan NEWMAP made to control flood in Aba.

“We have a challenge. That challenge is that we had the Umuagbai problem and the Uratta flood. We’re trying to move water from Uratta to Umuagbai and then from Umuagbai to Aba River.

“The one that’ll move from Umuagbai to Aba River is under construction as we speak. When we looked at it, we had to encourage the contractor to fast-track the process of construction.

“Luckily, during the rains, you can still go on with the construction of drains. It is not like earthworks where you can’t do much during the rains. In fact we had to ask the contractors that if they don’t have machines let them hire equipment and fast-track the work.

“I thank God that as at Friday when I went there, they’ve mobilized more equipment I’m sure by the grace of God before it gets too bad we’ll handle it.