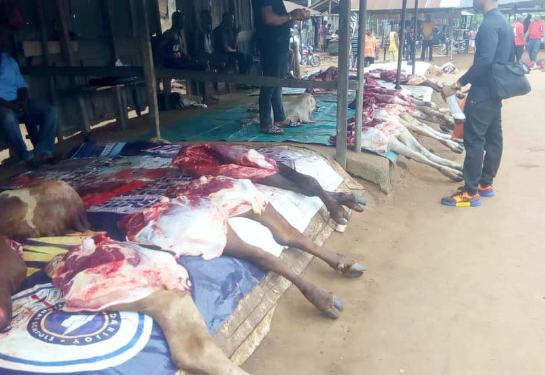 In August this year, Abia State Commissioner for Health, Prof. Ikechi Mgboji alerted Abia residents of the discovery of bovine tuberculosis in some cows in the state.
He warned the public of the eating of cow lungs as according to him, veterinary officials from his ministry made the discovery in two cows after the cows were tested, saying that the bovine tuberculosis was highly infectious to humans. The warning by the commissioner created anxiety among Abia people, especially consumers of beef.

But two months after the alert by Mboji, a new vista has been opened on the terrible condition of Umuahia Central Abattoir, the place where meat consumed by great population of Abians, are processed on daily basis. Situated at Ubakala, the headquarters of Umuahia South LGA off the Enugu-Ph express way, the abattoir has a boundary with villages of Ntigha in Isiala-Ngwa North and Umunwanwa of Umuahia South Councils.

Poor condition of abattoir
The abattoir which is subdivided into two sections “Slaughter” and trading area was a beehive of activity as buyers came from different parts of the state and beyond, to buy meat.

While the trading section of the market was in good condition, the same could not be said of the abattoir area, popularly called “Slaughter”.

The slaughter area, as it was observed, did not boast of good sanitary condition considering the fact that beef processed from the place is consumed by thousands of people.

The absence of a good water system and proper drainage system also made it impossible for a smooth channelling of animal blood. It was also found out during the visit that veterinary officials are posted to the abattoir on daily basis to ascertain in the health conditions of cows to be slaughtered and also to carry out tests on the meat after the cows are slaughtered.

However, investigation gathered that the health officials are much interested in the revenue their office generates from the place, than their primary duty which is to ensure the suitability of the meat for human consumption.
Local Government officials who are also posted to this place equally pay much premium to the collection of revenue than being interested in the general sanitary condition of the abattoir.

The abattoir as it was observed, also lacked the presence of functional laboratory where the wholesomeness of beef should be confirmed before being allowed for sale to the general public.

We are abandoned by govt-Oriaku, butcher’s chairman

Speaking to News Echo, the Chairman of Umuahia Butchers Association Pastor Tobechi Bright Oriaku said his association under his leadership had done a lot to ensure the neatness of the abattoir and its surrounding environment. He however

He however lamented that all concerned government agencies in
Abia State had abandoned the welfare of the “slaughter” to the butchers alone,
adding that the government agencies were only interested in huge revenue
they generate from the market. According to Oriaku, “during rainy season this
place becomes a major challenge to us to manage because of the environment.
This is because of lack of a functional water system and good drainage.
The State Government and all the relevant agencies are not assisting us at all.
They only promise us many things before elections but after gaining power,
they abandon us. “Most of the things we use here were put in place
through the efforts of members, not from the government.
Can you imagine that we buy water from women to wash
the meat we sell, clean the slab and to
ensure a good smelling environment.

According to Oriaku, “during rainy season this place becomes a major challenge to us to manage because of the environment. This is because of lack of a functional water system and good drainage. The State Government and all the relevant agencies are not assisting us at all. They only promise us many things before elections but after gaining power, they abandon us.

“Most of the things we use here were put in place through the efforts of members, not from the government. Can you imagine that we buy water from women to wash the meat we sell, clean the slab and to ensure a good smelling environment.”

On the fear that some cows suffered some disease before being slaughtered for sale, the butcher’s chairman dismissed the claims as unfounded.

In his words, “all the cows slaughtered here are certified fit for human consumption by health officials. We don’t allow cows with diseases to be sold. Even if we discover any one to be unfit for consumption, we won’t allow it to be sold. We work with the veterinary officials.”

Beyond the chairman’s explanations, this reporter noticed that many butchers in several markets visited in Umuahia left the beef on their tables uncovered, attracting a swarm of flies around the meat. Sale of leftover meat, popularly known as “Anu Fridge” by some butchers is another form of worry for the consuming public. This is because of the health threat they pose to the human system.

But a butcher at Amuzukwu relief market, Mr. Okechukwu Ndumele said problem of leftover meat on economic hardship, noting that butchers found it hard to finish their meat on daily

basis, occasioned by low purchasing power of consumers.
Reminded that such could lead to outbreak of diseases among consumers, the butcher replied “we sell them off the next day”.

Reaction of government agencies
Queenlilia Nwokocha, the Director of veterinary services, Ministry of Agriculture, Library Avenue, Umuahia in reaction, said her office had done enough to ensure the wholesomeness of beef consumed by the public.

She however claimed that her office did not have direct control of activities in the States as the regulatory function had been contracted out.

According to her “the cattle control post has been handed over to contractors, so we don’t have powers over the activities but it is important that only healthy animals allowed to enter the market. No unhealthy cow should be slaughtered or sold to the public”. The veterinary director, Queenlili Nwokocha said.

In his reaction, Prof. Ikechi Mgboji, the Abia State Commissioner for Agriculture said his Ministry would always ensure the sanity of Umuahia abattoir as well as the healthiness of meat sold in the market.
Prof. Mgboji reminded the reporter that it was through the vigilance of his Ministry that outbreak of Bovine tuberculosis was prevented in Abia State.

The Commissioner however promised to investigate all the issues raised by the reporter about Umuahia abattoir, while charging Abians to report to his office, any unwholesome conduct by meat dealers.

The Commissioner for environment, Chief Tony Nwamuo, speaking through the Director of Pollution control of the Ministry, Mr. Ikechukwu Ukaegbu said it was the responsibilities of relevant agencies in synergy with the leadership of butchers to ensure that Abia residents are not served unfit commodity.

He added that the Ministry had the power to sanction any group that contravened the State’s environmental ethics.
But Dr. Joe Osuji, the Commissioner for health whose office is at State Secretariat, failed to reply to text messages and phone calls sent to him on the issue.

Sterling Bank gets nod to convert to holdco