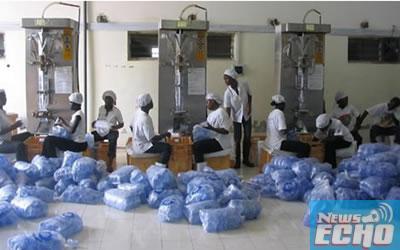 Table water producers in Aba said they have decided to withdraw their products and services effective from May 26 2022. They cited unwholesome activities of government revenue collectors and touts as the major reason for their decision. The umbrella body of the producers of the popular (pure water) sachet water brand said its decision to withdraw its services and products is the last resort to protect their businessesfrom a total collapse.

Ejikeme Uzoma, the Chairman of the union made this known at an interactive session with the newsmen after an emergency meeting of the union.

Uzoma said the decision to withdraw their products and services will remain in force until the situation that necessitated their strike action is adequately addressed by the government. He said that the regime of multiple taxations, harassment of their members by all manners of touts, and constant seizure of the operational vehicles of their members by those posing as government revenue collectors have made Aba unfavourable for business. He said that all the harassment coupled with the already harsh business environment is threatening to force them out of business, hence their resolve to alert the people, and authorities of the state of their predicament.

Uzoma further noted that, if nothing is done urgently to address the issues at hand, it will not be long before his members will close shop.

“Let me state here clearly that Aba has become a kind of dumping ground for all manners of touts. These touts, go about harassing and intimidating our members on daily basis under the guise of collecting one type of revenue or the other. “Daily, the operational vehicles of our members are impounded for no just reason. The immediate cause of our strike action now is the decision by the Abia State Signage and Advertising Agency (ABSAA) to levy our members a yearly rent of One hundred thousand naira (N100, 000) as against the normal N10,000. We have been paying. “Under the Abia state Revenue Harmonization law of 2020, we have been paying ten thousand naira. But all of a sudden, we received a letter from ABSAA that we should be paying one hundred thousand naira.

“And when we queried the decision, they said we should pay fifty thousand naira. The question is, how many of our members are having up to fifty thousand naira as their overall capital? “Besides that, and despite the existence of the Abia state harmonized Revenue Law, we are harassed and intimidated by touts to pay all manners of taxes. Now the situation has reached a chocking point, that we can no longer tolerate it. That is why we are embarking on this strike action, to draw attention to our plight,” he said.

Uzoma, therefore, called on Governor Dr Okezie Ikpeazu to urgently come to their aid before, the Aba table water producers are completely driven out of business. “Our members are of the firm belief that the governor is not aware of the activities of these touts and all the illegal revenue collectors. “We believe that it was the Governor’s honest intentions to control this ugly situation within the state Revenue collection system that goaded him into signing the state Revenue Harmonization law in 2020. “So we are calling on him to come to our rescue now, to save our businesses from collapse, as well as save several thousands of jobs which our members generate,” he said.

The Central Bank of Nigeria (CBN) says it disbursed the sum of N57.91 billion for the execution of 185,972 projects under the anchor borrowers’ programme (ABP).
Godwin Emefiele, governor of CBN, disclosed this on Tuesday at a news conference in Abuja.
In a CBN communique according to the Emefiele said the funds, disbursed over a period of two months, were for projects meant for the cultivation of rice, wheat, and maize.
In November 2015, President Mohammadu Buhari launched the ABP initiative to boost agricultural production, improve foreign exchange and reverse Nigeria’s negative balance of trade on food.

The initiative captured smallholder farmers cultivating cereals (rice, maize, wheat etc.) cotton, roots and tubers, sugarcane, tree crops, legumes, tomato, and livestock.
Emefiele said at least four million smallholder farmers across Nigeria have been supported to boost the production of agricultural commodities in the country.
“Between April and May 2022, the bank released the sum of N57.91 billion under the anchor borrowers’ programme (ABP) to 185,972 new projects for the cultivation of rice, wheat, and maize, bringing the cumulative disbursement under the programme to N1.01 trillion, disbursed to over 4.2 million smallholder farmers cultivating 21 commodities across the country,” Emefiele said.
“The bank further disbursed the sum of N1.50 billion, under the accelerated agriculture development scheme (AADS), to one (1) new youth-led project, piloted and funded through the Government of Ondo State for the acquisition of assets for oil-palm cultivation and the establishment of poultry farms.
“This brings the total disbursement under the Scheme to N21.23 billion for 10 state-led and three (3) private sector-led projects.
“In addition, the Bank released N21.73 billion to finance seven (7) large-scale agricultural projects under the Commercial Agriculture Credit Scheme (CACS).
“The funds were utilized for the establishment of a ranch and milk processing facility; procurement of feed and medication for livestock/dairy production; construction of a 300 metric-tonne per day oil mill in Gusau, Zamfara State; acquisition and installation of an agrochemical factory; as well as purchase and stockpiling of homegrown maize for animal feed production. This brings the cumulative disbursement under this scheme to N741.05 billion for 674 projects in agro-production and agro-processing.”