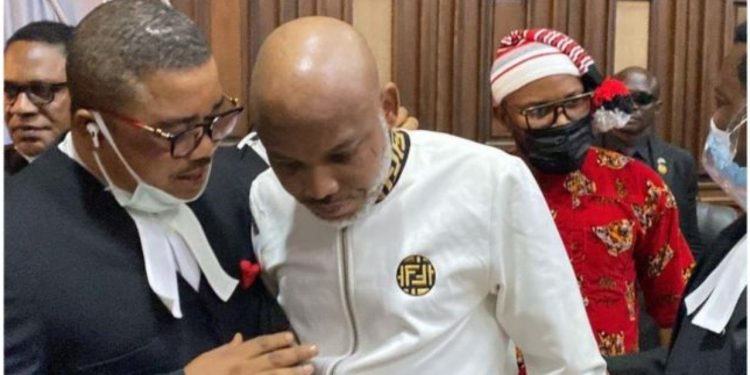 As trial Judge adjoins ruling to May 26, takes accused in lighter mood

Justice Binta Nyako of the Federal High Court, Abuja, on Wednesday, declined to grant bail to the detained leader of the Indigenous People of Biafra, IPOB, Nnamdi Kanu, pending the determination of the treasonable felony charge the Federal Government preferred against him.

Justice Nyako held that Kanu must explain the reasons, he breached the previous bail that was given to him before he could enjoy another favourable discretion from the court.

“However, the defendant is at liberty to refile the application.” Justice Nyako noted that Kanu’s trial had since 2015, suffered various setbacks owing to over 19 interlocutory applications that have been filed, in the matter.

The judge, therefore, implored the parties to allow the case to proceed on trial to enable the charge to be determined, one way or the other.

Kanu’s had in the application he filed pursuant to sections 6(6) and 36(5) and (6) of the 1999 Constitution, as amended, as well as sections 161, 162, 163 and 165 of the Administration of Criminal Justice Act, ACJA, 2015, prayed the court to release him on bail, pending by determination of the charge against him.
He equally prayed the court to order the Department of State Services, DSS, to produce the medical report of the defendant who is currently in its custody.

Kanu told the court that he was severely tortured for eight days in Kenya before he was repatriated back to Nigeria for the continuation of his trial.

He alleged that his health condition deteriorated, following“a highly poisonous substance” he said was injected into his system, which he said is causing him to have constipation and increased heartbeat.

Insisting that the DSS lacks the necessary medical facility to cater for his health needs, Kanu, also told the court that he was put to solitary confinement where he alleged that he was daily exposed to mental torture.

The IPOB leader told the court that he has“credible and reliable sureties”, pledging that he would not commit any offence while on bail.

Besides, Kanu, argued that he has not been tried or convicted by any court of law in the country, contending that he was entitled to bail.

He further drew the attention of the court to the fact that he was previously released on bail on health ground.

However, FG, urged the court to refuse the bail application, insisting that Kanu, having realized the gravity of the case against him, would run away from the country and not make himself available for trial.

The judge fixed the date to rule on an application by Nnamdi Kanu’s counsel, Mike Ozekhome SAN, requesting the court to vacate its earlier order that stated Kanu must be tried in absentia following his inability to attend the trial.

Ozekhome argued that the court was misled to make that order, insisting that facts are on ground to show why Kanu fled the country involuntarily.

Ozekhome said that the application shows the circumstances surrounding the fleeing of Kanu.

Specifically, Ozekhome has urged the court to set aside the order for trial in absentia and revert to its earlier status accorded bail to Kanu.

Meanwhile, the Court had same Wednesday struck out a 6-count amended charge preferred against Kanu by the Federal Government following the withdrawal of the charge by the FG.

Mike Ozekhome SAN, Kanu’s counsel had complained to the court that the prosecution was delaying trial by continuous amendment of the charge against his client.

Ozekhome told the court that this was the 7th time the FG amended its charge.
However, the court agreed with Ozekhome’s objection to the fresh charge and consequently struck it out.

The trial judge, Justice Binta Nyako, who reminded Ozekhome that he had once thanked the DSS in open court for procuring an orthopaedic mattress, pillow and others for his client, said she had already ordered that the security outfit should give Kanu moderate treatment and care while in detention like food, clothing, medicare, etc.

Then Nyako turned to Kanu and said despite her order for him to change his clothes, the IPOB leader continued to put on the same milk-colour designer wear.

The judge said though Kanu, on his own accord, keeps coming into the court with the same attire, she saw him in the media with other clothes.
The judge then jokingly said she was a Liverpool fan and asked Ozekhome if he was also a fan of a football club, and the senior lawyer answered in the affirmative.

He said he was also a fan of Liverpool F.C.

Nyako then asked Kanu if he was a fan of Chelsea Football Club, going by the designer’s clothes he keeps wearing to court.

“What is your team? She asked.

Kanu gently stood up in the dock and said: “My team is Liverpool even from the age of seven”.

The judge then told the DSS legal director, who was in court, to always allow Kanu to watch the matches of his favourite football club.

“You must allow the defendant to watch the matches any day they are playing,” she said, adding that she was going to make an order to that effect.
The DSS official, however, said his office had always given him access to watch.