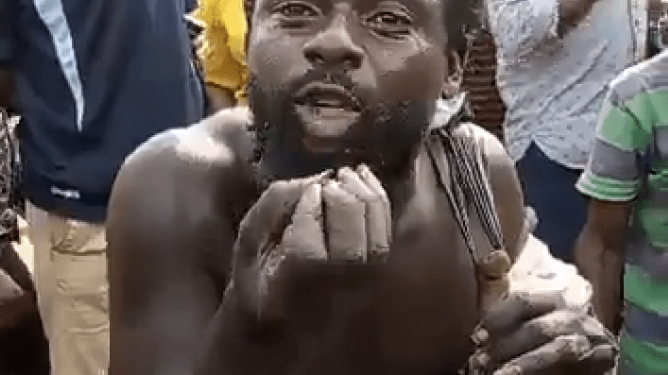 0
SHARES
95
VIEWS
Share on FacebookShare on TwitterShare on Linkedin

The exact cause of most mental illnesses is not known, it is becoming clear through research that many of these conditions are caused by a combination of biological, psychological, and environmental factors. Some mental illnesses have been linked to abnormal functioning of nerve cell circuits or pathways that connect particular brain regions. Nerve cells within these brain circuits communicate through chemicals called neurotransmitters.

The Google search engine defines madness as “the state of having a serious mental illness”.
The Webmd.com goes ahead to state that “the exact cause of most mental illnesses is not known, it is becoming clear through research that many of these conditions are caused by a combination of biological, psychological, and environmental factors. Some mental illnesses have been linked to abnormal functioning of nerve cell circuits or pathways that connect particular brain regions. Nerve cells within these brain circuits communicate through chemicals called neurotransmitters. “Tweaking” these chemicals — through medicines, psychotherapy or other medical procedures — can help brain circuits run more efficiently. In addition defects in or injury to certain areas of the brain have also been linked to some mental conditions. Other biological factors that may be involved in the development of mental illness include: genetics, infections, brain defects or injury, parental damage”.

From the above definition and explanation, what are the reasons madness is ravaging Nigerian youths with reckless abandon? A survey carried out by News Echo revealed that there are certain actions of the Nigerian youths of today which lead to madness. For instance, there are some foods, drinks and general way of life that the youths of today eat, drink and do out of proportion that really cause severe mental and psychological damage.

A priest of the Archdiocese of Owerri, Rev Fr. Chika Okpara noted that “You can testify that in the past, you hardly can see anybody, youth or adult, smoking Indian Hemp publicly. It was a taboo. The moment it was noticed that a particular person was indulged in that illicit act, that person would be made to face the wrath of the law. Through that way, excessive indulgence in hard drugs, drinks and other dangerous habits were put into check.

But today, that is a thing of the past. You see youths mostly and few adults buying and selling hard drugs openly and also taking them publicly. Whenever any act is not regulated or controlled, it causes harm. The harm caused by hard drugs on our youths is mental sickness. It does not take a soothsayer to let you know this”.

Collaborating the above assertion, Dr. Philip Zimbardo of American Psychological Association (APA) noted that there “situational forces” that can cause madness. “My colleagues and I have demonstrated that situational forces…can generate surprisingly powerful contributions to make good people behave in bad ways,” he said.
Zimbardo’s theory may be the central point why many Nigerian youths are mad today. In the words of Comrade Casmir Iwu, immediate past president general of Umunokwu Autonomous Community, Okwuato Aboh Mbaise in Imo State, the current life styles of some Nigerian youths certainly, can cause madness. “Look all over the place, you will sees mad rush for money by our youths. I mean rituals, kidnappers, bandits, yahoo-yahoo, 419, etc – do you know the kind of ritualistic process they undergo? Do you know the sacrifices they perform? Of course, the gods can equally strike. And remember the law: whatever you do must come back to you”!

In an interview with Reverend (Prof) Emmanuel Israel, the presiding chancellor of Global Theological Seminary INC and presiding bishop of Action Faith Global Church, Aba, Abia State, many factors are responsible for madness among the youths.
“It was not so before when people respect Godly tradition. When societal values were maintained, People now respect nothing except money. Mammonism brings madness. Mammon is money while Mammonism is the love of money and worship of money. Bible says you cannot serve God and Mammon. That’s to say, you cannot serve God and money. In Igbo-land now, the greatest thing people regard is money.

Therefore, they’ll try to get the money by all means. Possibly they’ll enter into cults, swallow all kinds of things, associate with demons and at the end of the day, the devil will end up showing them that he does not love them. That brings madness to them. The Bible says that the fear of God is the beginning of wisdom. Now, the opposite of wisdom is foolishness. Every mad person is already a fool. That’s why a mad man can enter the dustbin and relax because he is a fool whose senses are already tampered with. A wise man cannot do it. The excessive madness among youths nowadays is because people don’t fear God. And whoever doesn’t fear God, ends up mad because it’s the lack of fear of God that’ll push them into bad associations and make it quick ideas that lead them to madness”.

He added, “Again, hard-drugs are part of the causative agents of excessive madness in our streets. And it’s also lack of the fear of God that leads to such intake of hard-drugs. Lastly, I can also link it to ancestral covenants. Some, their ancestors placed them as their offspring to demons. When these offspring grow up, they’ll no more recognize the demon. Instead of running to Christ, they’ll prefer to remain neutral. And in the spiritual realm, there’s no neutrality. So, the devil now afflicts them with madness,” he enthused.

Another cleric, Pastor Henry Ikechukwu blamed the rise in madness among the youths on absence of fear of God in their lives and the inordinate quest for money. Ikechukwu also blamed some parents for the problem, adding that many parents pushed their children into temptation with unnecessary comparisons. According to the pastor, who is the founder of kingdom goal church, Umuahia, “The rate of madness in recent times is because people, especially the youths have lost the fear of God in them.

They no longer come to church, they longer respect their parents or seniors and they join bad gangs in university so tell me why you won’t have rise madness among them.” He also blamed the rush for quick money for the problem. “Do you know that yahoo yahoo crime has now been taken to the level of rituals and i tell you this could be the reason many girls are getting mad toddy after having affairs with these yahoo boys.” He said many cases of madness as seen on the streets of Umuahia, Aba, Owerri, Enugu , Onitsha, Awka, Asaba and indeed all parts of Nigeria are traceable to ritual involvement of the victims or alleged membership of secret cults. He called on Nigerian youths to return to God to save their souls while urging the federal government to establish factories to employ teeming youths.

Ikechukwu also blamed unregulated hotel businesses in the South East , alleging that many sordid activities went on in some hotel rooms undetected including being allegedly being used to perform internet fraud businesses. The various respondents who spoke on the issue streamlined the causes to hard drugs, ritual involvement, disrespect to God, unemployment, lack of attention to mental health management, cultism etc while urging the federal and State governments of the South East to take action

A consultant psychiatrist working at the Methodist Church homes for mentally challenged persons, Itumbuzor, Bende LGA of Abia State, Elder Dr Wilson Mgbaraonye, blamed the rise in the number of lunatic cases to frustration occasioned by unemployment in the society as well as the fact that people pay little attention to their mental health. Mgbaraonye seasoned that some of the mental crises in humans develop in stages and canvassed early detection and management of a suspected case of madness.

He regretted that the rising number of mentally-sick patients was threatening over stretching the human and material capacity of the center and urged Nigerians, especially the youths to avoid any behavior they may affect their mental soundness.
In his opinion, a traditional ruler, Eze Cyril Ogbenna of Uzi/Amizi in Olokoro , Umuahia South LGA of Abia State is of the opinion that consumption of hard drugs and involvement in bad groups among the youths were responsible the riding cases of mental illness. Ogbenna urged Nigerian youths, especially those from his community to occupy themselves with education or skillful employment, as according to the royal father, an idle mind will remain the devil’s tool. He blamed some parents for dangerous actions by today’s youths. The royal father also reiterated his call for abolition of some cultural practices in some communities which may endanger the success of the youths.

In the opinion of an Okigwe based pastor turned native doctor, Ifeanyichukwu Chukwudike Nwadike, what gets people to lose their mental state derives from what they commit each time. He said, “It is their greed and avarice that get them to misbehave by joining groups to make illicit money. Sometimes they are not able to sustain meeting the requirement they were asked to do. Sometimes the young men can steal or rob someone and the victim may chose to sue them before a shrine. A victim who finds it hard to let go can seek vengeance by taking the matter to a shrine unknown to the culprit.

Another traditionalist, Ezemmuo Iheanyichukwu Anyanwu, (Ugo Amadioha) summed up that what makes people behave irresponsibly is caused by ‘Agwu’. He claimed that it is Agwu that pushes one either into drug consumption, alcoholism, madness or poor mental state. According to him, ‘Agwu is the mother of madness if one fails to give it attention’ He described Agwu as “a multiple spirit that is responsible for our mental well being. It is the brain of our Chi. Agwu can bring wealth, brilliance and can lead you to wrong behaviours too. It depends. The embarrassing strange behaviors that we find ourselves in are caused by Agwu.” He however, stated that even though many people are involved in drug consumption, it is only their Agwu that can lead them to the extreme position of madness. Agwu he said is responsible for every wrong behavior.

A Lagos based Igbo spiritualist and teacher, Ogechi Ibekwe in her views had this to say: “madness or mentally challenged situations could occur, due to several factors:
Looking at it from the science angle; the element that enables a person to be aware of the happenings in his environment, which is the mind, could be interrupted of its activities due to maybe an underlying illness or a direct injury to the brain which is the sit home of the mind, this can result to lack of mental alertness.

Madness is not only when you are roaming about naked in the street. Psychology defined madness as “being out of one’s mind “which means that someone who gets angry to the level of destruction is equally mad.
The causes of madness according to Igbo spiritual belief is that madness comes to someone especially when there is a call that the person refuses to answer to Agwu the spirit of divinity and health is sent to disturb the person through all sorts of disturbances from downward slopping of one’s business to health issues including madness.

The reason for most madness amongst the youth’s maybe the fact that most youths believe that the Africa’s traditional belief is false and disregard whatever call by the spirits to service.
One thing Africans do not know is that science and African beliefs are interwoven. There is no physical illness that did not emanate from the spiritual.
From the accounts above it can now be said that there are forces that cause madness.

ASPON cautions against piracy in Anambra