....says, Nigeria is on a crossroad 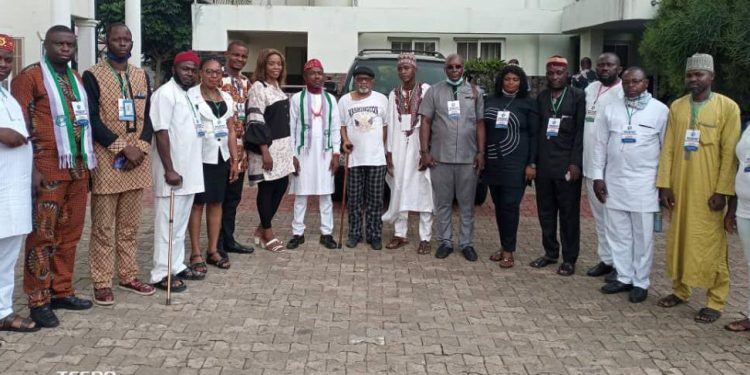 Former Anambra State Governor and one time Senator of Anambra Central senatorial zone and current Minister of Labour and Employment, Senator Dr Chris Nwabueze Ngige (OON) has said that for Nigeria to move forward towards economic prosperity there is need to appoint a leader who is experienced and can compensate for the years eaten up by locust.

Sen Dr. Ngige made this known during the courtesy visit by the National Forum for South East Presidency at his home town Alor, Anambra State on Monday 18/4/22.

The Minister described the issue of the President of Nigeria come 2023 as one which nobody should toil with because Nigeria is on a crossroad.

He bemoaned the failure of the G-15 Economic Council that visited Indonesia and Malaysia in 1991 set up by the Banbangida administration which brought Nigeria’s foremost business men and industrialists together to talk about how to change the narratives.

According to the Minister, “those were countries that were at par with us in terms of development that time, he (Babangida) wanted the group to bring back everything good that was making those places boom. A car prototype produced in Indonesia called the protosaga, the plantain plantation and others were brought down to Nigeria, but there was no implementation”.

He however attributed the yearnings of economic Foundation of Nigeria to what happened in that era. “Nigeria needs a leadership that will compensate for the years of the locust, the locusts have eaten everything but the tree is still standing, we need leadership that will make the tree grow new leaves. I am taking with experience from experience which I have, i know how to revive Nigeria”.

“I have an experience on what to do so that this tree that whose leaves have been taken away by locust to regrow those leaves with time and with those leaves Nigeria will grow back to economic prosperity”.

“All the boko haram, bandits, latter day IPOBs, the avengers and other agitators are the manifestation of economic hardship and man’s inhumanity to man, the have and the have nots., so for Nigeria the die is cast, if we want Nigeria to grow, we must remove injustice, inequality, unfairness and if we do that we will be able to get a good leader to replace President Buhari, he added.

Speaking, National President of NFSEP, Dr Patrick Enunuke analysizing the political history of Nigeria which has given a chance for the Yorubas and Hausas said, the reason for agitations from the IPOB which is wrongly being done is because of these sense of marginalization. He noted that a lot of injustice has been meted on the Igbos and that’s why where there is injustice, anarchy is bound to prevail.

Dr Enuneku further asserted that the visit was to identify with Sen Dr Ngige as an APC aspirant. He eulogized Sen. Ngige as an Igbo man who have the capacity and experience as a former Governor, former Minister and a Senator to take up the mantle of leadership in Nigeria.

Also Speaking, National Financial Secretary NFSEP, Engr Ogbonna Victor, while appreciating the courtesy visit to Sen Ngige, pointed out some of his antecedents during his tenure as Governor in Anambra State. He however said the Igbos are scared all over the federation which means if we can speak in one voice, we will be able to achieve whatever we project.

He pleaded with Dr Ngige to make Alliance with major stakeholders and ensure that the primary ticket under APC will be handed over to him. He assured him that once the mandate of the Igbo is achieved as a Nigerian President, all these agitations in the southeast will be a thing of the past

Narrating years of commitment and hard work by Sen Ngige during his regime as Anambra Governor, a stakeholder, Dr. Ralph Agwuna (Shete) noted that Ngige’s administration revamped the entire system through provision of basic infrastructure, education system, regular payment of civil servants salaries, arrears of pensioners paid, employment creation, including recruiting of young judges so when projected will make it to supreme court before retirement among others. He agreed that Ngige remains the best choice while assuring of his support.

Coordinator representing Idemili North, Comr Arinze nweje, informed Sen Dr Ngige that the Nigerian masses are waiting for him because of his liberation in Anambra. “Under serious conditions in Anambra state you performed marvelously well, we are waiting to support you”, he added.

News Echo reports that NFSEP, is a political pressure group existing in the thirty six states of the country and five countries in Diaspora that are clamouring for one united Nigerian President of Igbo extraction from Southeast.