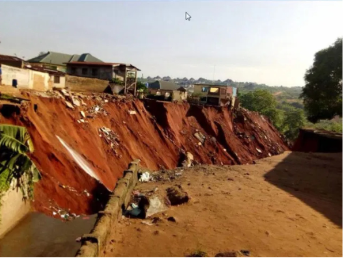 Most of them have gone beyond what communal efforts would do and governments are not helping matters with the way they are making the issue of ecological funds shrouded in secrecy.

Anambra
According to a newspaper report, there are no fewer than 1000 active erosion sites. Anambra is the state with the highest number of gully erosions in the country. Many villagers in some parts of the state have been forced to abandon their homes for fear of being washed away by gully erosion.
Communities with the worst erosion sites include Agulu, Nanka, Adazi-Nnukwu, Oko, Ozubulu, Nnewi Ichi, Onitsha, among others. The gully erosion is more menacing during the rainy season and it had also been discovered that most of them developed as a result of human habits, such as sand excavation and blocking channels of water flow.

Experts have observed that Anambra State is adjudged to be the most erosion-prone and erosion devastated landscape in the world. Although other states in the South-East geopolitical zone of Nigeria have their dose of the menace, the number in Anambra State is so intimidating that it is generally described as the erosion hub of Nigeria.

In 2017, the World Bank approved N6.9 billion for the control of erosion sites at Nnewi Ichi in Nnewi North local government area. The project is being executed in partnership with the state government in which Governor Willie Obiano promptly paid N1 billion as the state’s contribution to the project.
The erosion menace in the community is such that many houses have been submerged and even an asphalted road constructed by the state government was cut into two, thereby severing people of the same kindred. In the commercial city of Onitsha, erosion also submerged the multi-million naira Nkisi water project, which is why the water scheme begun several years ago has not been completed.

Disturbed by the challenges posed by the erosion onslaught in the state, the Commissioner for Works, Mr Marcel Ifejiofor said the state government had inaugurated an Erosion Design Review Committee to monitor the menace in the various communities.

The committee identifies and informs the relevant authority of the development of any new erosion site to enable government nip it in the bud. According to Ifejiofor, the magnitude of gully erosion in the state was such that it is not something the state government could handle.
He also regretted that some people intentionally build on water channels, which results in the blockage of water flow. Another community that has a frightening erosion menace is Oba in Idemili South Local Government Area.

Because of the threat to many homes in the area, the community called for the intervention of the federal government to save the people. Regent of Oba, Prince Noel Ezenwa said the leadership of the community had written to the Federal Ministry of Environment and to the member representing the area in the House of Representatives, Hon. Obinna Chidoka to come to their assistance, saying that the community is still waiting for their replies.

Abia
In Abia State, at least 5 communities have sent a save our soul messages to the federal and state governments to save them from rampaging gully erosion ravaging their homes and farmlands. The communities lament that if nothing is done to check the widening erosion, their communities would be cut off from other parts of the state.

However, the Abia State government has reclaimed the Umuagu Isingwu, Imenyi, Umuezekwu and the 2.5 kilometre Umuakwu Nsulu erosion sites through the Nigeria Erosion Watershed Management Project, NEWMAP. South East Voice gathered that a huge portion of the Abiriba section of the Umuahia – Ohafia federal highway at Agueze Amaogudu, now poses a huge risk to motorists as the gully erosion had almost taken over the two lanes of the highway.

The contract for the reclamation of the site was said to have been awarded by the federal government to a construction firm. However, as at the time of filing this report, the company was yet to mobilize to site. It was observed that rehabilitation works had commenced on the Ogudu Asaa community in Isuikwuato council area attracted by the member representing Isuikwuato/Umunneochi federal constituency, Hon. Nkeiruka Onyejeocha.

In their save our soul message, the Ohuhu clan in the Umuahia North council area, lamented that the gully erosion has almost cut off the access road from Umuahia to the community and urged the federal and state governments to come to their aid by reclaiming the site portion and checking further encroachment.

The Umunwanwa erosion site in Umuahia South council area is said to have started 16 years ago and has expanded over 2kilometres threatening to take over the area “No fewer than 5 indigenes of Umunwanwa community had lost their lives when they fell into the gully.

There are growing fears that many houses may cave into the gully as the erosion is also threatening to take over the community primary school, village square and a church,” a resident of the area, Uchenna John, lamented.

Commissioner for Information in Abia State, Chief John Okiyi Kalu, in an interview with South East Voice, urged the federal government to direct the construction company awarded the contract for the erosion site at Agueze Amaogudu Abiriba on the Umuahia – Ohafia highway to urgently mobilize to site to save lives of motorists.

“We learned the federal government has awarded the contract for the rehabilitation of the gully erosion threatening to divide the Abiriba –Ohafia highway at Agueze Amaogudu Abiriba. “We plead with them to direct the construction company to urgently mobilize to site. It now poses huge risk to motorists; it is a disaster waiting to happen.

“If the contract has been awarded, only the federal government can tell why nothing has been done while people’s lives are being endangered. “On the part of Abia State government, we have reclaimed many erosion sites across the state; from Umuagu Isingwu , Imenyi, to Umuezeukwu and Umuakwu Nsulu communities, among others.

“For the Umuezeukwu and Umuogele Umuakwu Nsulu erosion sites, we give God the glory that we have arrested the then widening gullies erosion and delivered 2.5km new road infrastructure to our people. “We are still on others. In no distant time, the rehabilitation of erosion sites at Ndiegoro community will commence”.

Enugu
In Enugu, many communities in Ezeagu and Udi councils are under severe erosion attack. Work is currently ongoing to tackle the massive erosion which has cut off Udi-Four Corner. Many of the homes and other properties, including farmlands are under threat of erosion in Udi and Ezeagu communities.
The university town of Nsukka is not left out. Communities in the six local government areas in Enugu North Senatorial District of Enugu State and environs are still under the heavy impacts of flooding, even as erosion continues to wreak havocs in many villages.
While Alor-Unor community in Igbo-Eze South Local Government Area of the state continues to suffer perennial flooding, erosion has also eaten deep into the only access road which passes through Olido in Igbo-Eze North Local Government Area of the state to Amube and Ogbodu communities in the same council area.
Mr. Emeka Omeh who spoke on the condition of the road said that apart from community efforts, erosion would have rendered the road completely impassable. Aku-Nkpologwu road in Uzo-Uwani Local Government Area of the state has been cut into two by erosion. Even Iheaka-Uhunaowerre-Ibagwa Aka Road in Igbo-Eze South Local Government Area of the state has already taken the life of a catechist and another victim as a result of flooding which eroded the road.

An indigene of Iheaka community who identified himself as Kenneth Odo, disclosed that the latter road has become a death trap for commuters and petty traders who ply the route to transport their farm produce to a popular market in the council area, Orie Igbo Eze.
However, the state governor, Ifeanyi Ugwuanyi, in an effort to open rural communities has constructed Udenu Ring Road in Udenu Local Government Area of Enugu the state which passes the five communities. Resident He also did Ugbene Ajima-Eziani rural roads to encourage the locals bringing out their farm produce to Nsukka metropolis.

The governor also constructed the Opi-Nsukka dual-carriage road which he adorned with street lights. He also did the Ibagwa , Obechara, Orba, Justina Eze Street, Ikenga Roads in Nsukka Local Government Area of the state among others.
Imo
The story of havoc being wrecked by erosion is not different in Imo State. Residents have been sacked from their homes. Farms have also been washed away. The case of at Trinity Street in Akwakuma, Owerri North Local Government Area is easily noticed.
One of the victims who is a lecturer of the Federal Polytechnic Nekede, Owerri, Emma Ogu, had to abandon his home for the gully erosion. According to Ogu, “I managed to move out my family members through the bush after making a hole in my fence. I am afraid that the area may be submerged given the incessant flooding of the area and its devastation. “The area is usually heavily flooded at any drop of rain.

“There is also the Obibi/Ochasi gully erosion in Orlu Local Government Area as well as Ezemazu Urualla gully erosion in Ideato North Local Government Area among others. However, the Commissioner for Environment Ikye Njoku, said the state government has banned all forms of mining in the state as a way of stopping the gully erosion.
Ebonyi
Erosion destroying farmlands, properties in Ebonyi State, cases of flooding had over the years led to loss of lives, destruction of farmlands and properties worth millions of naira in the state. Work is currently ongoing at Iyi-Okwu/International Market flood site, Iyi-Udele flood site, Odunukwe-Nkaliki-Hatchery road flood site and Ebia River, Egu-Ugwu Agbaja flood site at the tune of N13.76 billion.

“The project has also resettled a total number of 900 flood affected persons within the corridors of the four ongoing intervention sites in Abakaliki capital city including Iyiokwu, Odunukwe, Iyiudele, Ebyia River with the sum of N405, 635, 000. “We have received a total number of 144 complaints from the project communities.

Uzodimma commiserates with Anyaehie family over loss of patriarch