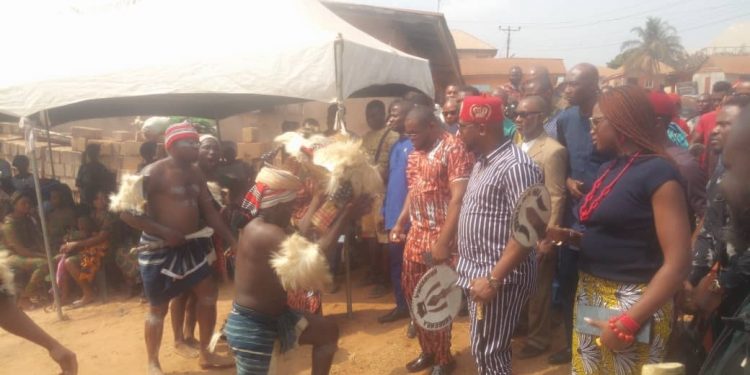 The body of Pa Pius Kalu Okoro was on Friday, committed to mother earth in his compound at Ndiagwuokpo, Umuchiakuma autonomous community, Ihechiowa in Arochukwu L.G.A. of Abia State.

The late Pa Okoro, who died at the age of 92, was the father of the General Manager of Deking Group of Companies, James Kalu.
The funeral service for Pa Okoro was held at St Mulumba’s Catholic Church, Umuye, Ihechiowa and was officiated by Rev. Fr. Remigus Ezeibekwe.
In his homily, Rev. Fr. Ezeibekwe challenged Christians to utilise their days in the world, in serving God and man, and extolled Pa Okoro for his life time commitment in the service of God.

The Catholic priest further encouraged Mrs. Janet Kalu Okoro, the widow to Pa Okoro, to remain strong in her faith in God even at this time of grief.
The son to the deceased, Mr. James Kalu who is the General Manager of DeKing Group of Companies, described his late father as a man of truth and a devout Christian who also used his time on earth to contribute to development of his community.

The General Manager of DeKing Group further explained that his father through his honest life, established a legacy worth of emulation.
He appreciated the Chief Executive Officer of DeKing Group of Companies/Publisher of News Echo and News Insider Magazine, Clan Chief (Prof) Sir Chimezie Kingsley (Ebubemba Ikeduru) and his amiable wife, Chief Lady Maureen Nneka Kingsley (Odi Uko na Mba) for gracing the occasion of his father’s burial.
Kalu who could not hide his expression of appreciation, commended the Uzoagba-born first-class philanthropist and his beautiful wife for identifying with him, despite the exigency of duties on their tables.

He further thanked the Editor of News Echo, Chigozie Uzosike, News Editor, Bright Okereke, staff of News Echo and DeKing Printing Hub for their presence, even as he thanked everyone who came for the burial.
In her tribute, the widow to Pa Pius Okoro, Mrs. Janet Okoro said it was painful losing a lifetime companion and prayed God to receive the soul of her husband in His bosom.

The Publisher of News Echo and News Insider magazine, Clan Chief (Prof) Kingsley Chimezie and his wife, Lolo Lady Maureen Nneka Kingsley (Odi Uko na Mba) transformed the atmosphere of Ihechiowa with their presence, while Editors and staff of News Echo Newspaper as well as staff of DeKing Printing Hub also graced the occasion.
A wake keep and night of tribute were earlier, observed in honour of Pa Pius Okoro, on Thursday, the eve of the burial.