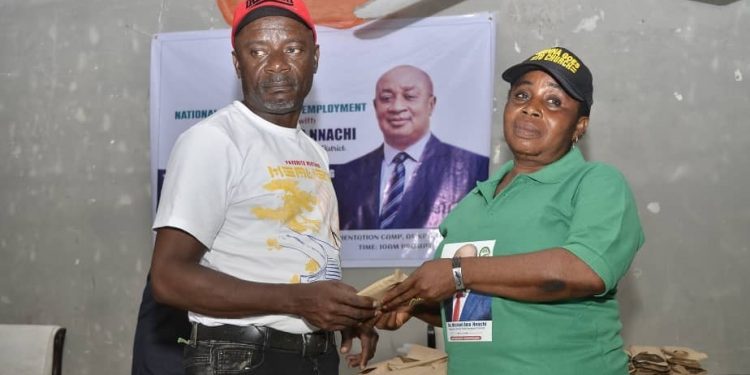 The Senator representing Ebonyi South Senatorial District, Senator Michael Ama Nnachi (PhD), has organised a three day skill acquisition training for Youths and Women of his constituency.
The training was organized in conjunction with the National Directorate of Employment (NDE) with keen focus on agriculture, other small scale businesses such as fishery, snailry and poultry.

Our correspondent gathered that about 90 beneficiaries were drowned from Afikpo North, Afikpo South, Onicha, Ohaozara and Ivo LGAs of Ebonyi South Senatorial district, to form the participants of the training, which held at Ebonyi Hotels in Afikpo North area of the State.

Senator Ama Nnachi, who is also the vice Chairman, Senate committee on poverty alleviation and social investment said the training was aimed at enhancing productivity in youths and women.
Senator Ama Nnachi, also made emphasis on the need to explore the agricultural and small scale businesses to benefit his constituents, and said he intended to further equip them with basic knowledge and tools on how to be self reliance, to enable them create employment opportunities for themselves.

He added that “representation is about impacting positively on the lives of the people,” and assured them of his continuous engagements towards mitigating the challenges they face as a people.
Ama who was represented by his legislative aide and former chairman of Afikpo North LGA, Hon. Obinna Agha, noted that youth unemployment remained one of the greatest challenges of the society.
“This was why facilitation of employment and skills acquisition training for women and youths, shall continue to remain top of the priority agenda in the Senate”, he stated.

He also gave assurance that the empowerment and skills acquisition training would be a continuous exercise, considering the need to touch the lives of as many of his constituents as possible.
“Senator Michael Ama Nnachi is an empowerment master, we are here because he has decided to empower his people.

“These are things he has been doing since he entered the National Assembly. Today is not the first time and it’s not the second or is it the third, and of course as I’m talking with you, “In two weeks time we will be having another empowerment. We are here to give out materials to people that benefited from this empowerment, he added.

Also speaking, the representative of the NDE in the State, Mr. Ernest Chinedu Okama, had said that youth empowerment was necessary in the country, noting that the youths were the bedrock of the society.
“At the end of this program, none of them will go empty handed and the impact of the training will be life changing to them that they will use it to sustain their families”. Okama said.
He urged the beneficiaries to apply the skills they acquired into good use to further better their lives.

Some of the beneficiaries, Ukpai Denis and Clement Kalu, on behalf of others, thanked Senator Ama Nnachi for organizing the training to engage them positively.