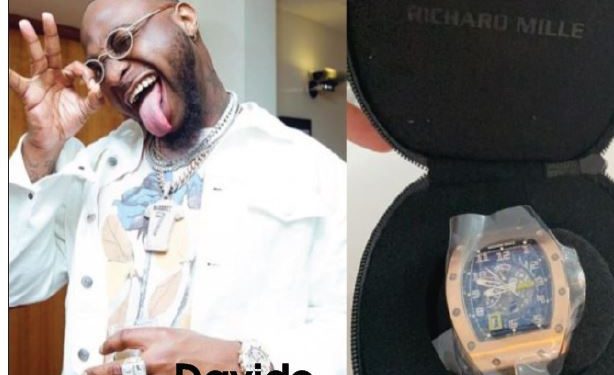 Although Nigerian singer Davido has clarified a statement in one of his songs about having N30bn in his account, there is no denying that the father of three has enough money to buy the luxury things of life. And on many occasions, he has been spotted in stores of various luxury brands splashing millions of naira on things as little as diamond earrings for his daughter Hailey. Recently, an Instagram blog called Insane Luxury Life that reviews luxury wristwatches, shared a photo of the Blow My Mind crooner wearing a beautiful wristwatch.

According to the blog, the watch is by a Swiss luxury watchmaking brand called Richard Millie. While some celebrities have been called out for wearing a fake, the Instagram blog attests to Davido’s watch being original. Luxury Life revealed that the watch worn by the father of three displays the hours, minutes, seconds, date, and power reserve. “@davidoofficial wears aRM030 Automatic in rose gold and titanium with a light blue strap. It features the classic tonneau-shaped case with a self-winding automatic skeletonized movement displaying hours, minutes, seconds, date, and power reserve,” the caption of the photo read.

The blog went on to state that the watch costs between N46m to N58m. “This timepiece has a list price of $120,000.00 and on market, it goes for around $150,000.00 dollars.” Davido took to the comment section of the blog and replied to the review. He said: “Never capped on God.” As expected, Nigerians had something to say as many took to the comment section to react. Many hailed the singer while some used that opportunity to take a jab at celebrities who wear fakes.

Regina Daniels ‘twins’ with her son in new photos

Three remanded for exhuming 10 corpses for rituals in Ekiti