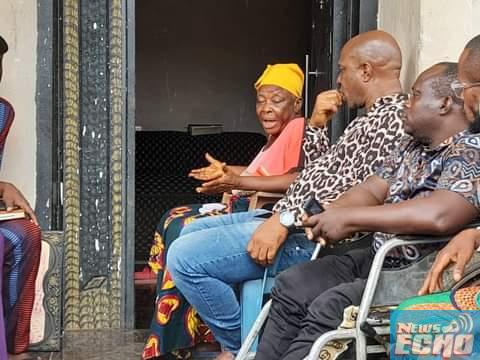 Abuchi's mother lamenting her son's death, when the Actors Guild of Nigeria paid her a condolence visit in Abia

The Abia State Chapter of the Actors Guild of Nigeria has paid a condolence visit to the family of Late Nollywood star, Emma Abuchi, at Umuagu Ohuhu, Umuahia North LGA of Abia State. Abuchi, a movie actor and Producer was allegedly killed by his personal assistant in Asaba, Delta State early July. During the condolence visit, the Chairman of Reconciliatory Committee of the Actors’ Guild in Abia state, Mr. Stanley Mba who spoke on behalf of the Guild, expressed deep sorrow at the death of their dedicated member.

Mba described their late member as a dedicated and skillful man who was also hardworking. Mba expressed deep sorrow that the former actor was allegedly killed by a man he trusted and made his Personal Assistant (PA). The leader of the delegation explained that the visit was to commiserate with the family of the entire family of Emma Abuchi in their time of grief.

The Actors Guild members prayed God to console the family while assuring that the murder suspect who is now at large would be apprehended. Also speaking, members of the Guild, Signor Nath and Emeka Onyekwere regretted the great loss caused by the death of Emma Abuchi to Abia state and movie practitioners in general. He disclosed that the family of the late movie star would not be left behind. Responding, the elder brother of the deceased, Ikpo Ugochukwu expressed shock at the death of his younger brother, who was fast-rising star, regretting that only God knows why his brother suffered the gruesome fate. In her lamentations, mother of the late Prince Emma Abuchi, Mrs Nwanyioma Ikpo described the death of her son as a big shock which but appreciated the members of the Actors Guild of Nigeria for identifying with her in her time of sorrows.