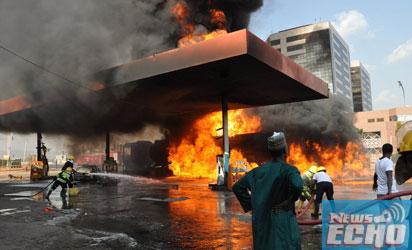 Popular petrol station, Masters Energy LTD, belonging to the Minister of State for Mines and Steel, Dr. Uche Ogah was on Saturday morning, burnt by fire from petrol tanker explosion.

The station, located beside Azikiwe road junction, Umuahia was engulfed with fire at about 10:am after a spark of fire under a tanker that was discharging 33 liters of diesel into the filling station’s pit.

It also happened in the morning while Umuahia residents were still observing Abia State government organised monthly clean up exercise.

The fire destroyed the tanker and one vehicle packed inside the petrol station as well as inner parts of the station and also affected one building beside it.

It was the intervention of the Chief of Staff to Governor Okezie Ikpeazu, Chief Anthony Agbazuere and other government officials that saved several buildings in the area from being consumed by the inferno.

A female staff of Masters Energy who spoke to News Echo on the scene, said the fire started in a little proportion before exploding into large flames, adding that it may have been caused by the harmattan season or an electrical fault from the tanker.

She thanked Governor Okezie Ikpeazu for mobilising the men of the Fire Service from Aba and Umuahia to put off the inferno before it could burn the entire building and other houses and even shops.

Apart from Masters Energy that is located in the area, there were also Oando, Texaco, among others situated along the road but they were saved by the intervention of the men of fire service.

News Echo gathered that men of Umuahia zone of Abia State Fire Service initially requested for assistance which made the Chief of Staff to Ikpeazu, Chief Anthony Agbazuere to mobilise the Aba zonal office and the federal fire service to join the Umuahia zone in the fight.

The manager to the filling station refused to speak to the press on the incident.

Abia State , particularly, Umuahia, the State capital has been witnessing fire outbreaks in the last one week, even as the Chief Fire Officer of Abia State, Mr. Aruah Nnanna said residents must avoid inflammable and electrical materials, especially during the harmattan.

Ebubeagu not for political witch-hunting – Emegha

Ebubeagu not for political witch-hunting - Emegha

Rallying Point : When the indomitable will of the people is activated