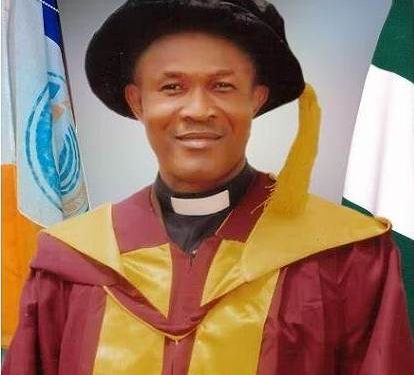 There is a definitive wave of technological renaissance in Federal Polytechnic Nekede under the inspirational leadership of Engr Dr Michael Arimanwa FNSE, the 8th substantive Rector of the institution. The renaissance is a period of great re-awakening and rebirth which traces its roots to a time of cultural and ideological rebirth of the English people – happening a little after the Middle Ages. Right from the time he was handed the baton as Rector, Dr Arimanwa had understood the demands of his job, hence he embarked on an ambitious institutional reform that has since remodelled and repositioned the polytechnic to an institution of excellence.

Markedly, when the Rector declared from the beginning that he would make the institution globally visible, a lot of people might have wondered how he was going to do so. But, the man of few words but substantial action, knew what to do. The twin strategy he effectively deployed has worked wonders in the institution. First, he hit the ground running by collaborating with relevant agencies of the government, both at the state and federal levels who made the institution accessible, thus saving it from the perennial challenge of physical inaccessibility. More importantly, the Rector deployed the instrument of technology to place the polytechnic on the global map.

At the core of this technological renaissance is research development. The poly chief from the outset realized that great institutions, organizations and nations of the world only made it to the top through a deliberate research development. With a robust awareness through workshops and seminars he organized for the staff of the polytechnic, the Rector took off on the noble path of innovation. He made sure that the research drive he was initiating was not mechanistically done. Rather, he created a template to gauge the quantum of what would be done and the result achieved.

This was with the belief that every research, whether qualitative or quantitative, should be goal-driven to achieve desired results. Succinctly, therefore, the smart Rector saw that researches carried out in his institution were tied to specific indices of development. As indicated elsewhere, Rector Arimanwa has through his clear and purposeful development agenda encapsulated in his 14-point agenda and 72-pronged target, achieved the three cardinal roles of a scholar or academic institution, which border on teaching, research and community service.

Having spent tens of years in the teaching profession and risen to the post of Chief Lecturer, the Rector may have realized that great educational heights are only propelled by research. A scholar who does not research well, may not be up-to-date with current research, reality or technique in his field of endeavour. A purposeful research can remarkably lead to inventions and innovations that add value to a society. It is through his penchant for research that the Rector has revolutionized pedagogical processes in the polytechnic. Consequently, there is more emphasis on practical learning than theoretical education in the polytechnic. This marks a paradigm shift from the ineffectual and analogue ways to the pragmatic and plausible path of learning.

The targeted approach deployed in developing and equipping laboratories and workshops in the polytechnic under the Arimanwa administration has made practical learning interesting, exciting and relevant. The institutional reform in that aspect has made both lecturers and students to consciously key into the Rector’s concept of what a modern polytechnic should be. Thankfully, the Rector’s Smart Campus revolution aimed at creating a 100% ICT-enabled polytechnic has put everyone in the right direction – the way of technology and innovation. Dramatically, the Federal Polytechnic Nekede is on a smooth sail in a ship whose name is “Smart Campus, Centre of Research and Technological Renaissance”. No one wishes to be left out of this smooth-cruising ship whose destination is the domain of academic excellence.
Rector Arimanwa by this technological renaissance has instigated a scholars’ movement of some sort, driven with a single-minded cause of social development through research and technology.

Today, the body language – a powerful non-verbal communicative cue – of the smart Rector (as he is fondly called) bespeaks research, technology and innovation. Thus, any scholar who wishes to be familiar with the Rector would either be research-oriented or technology-driven. This is a lucid and classic redefinition of leadership in an ivory tower. The prodigious quest to incentivize research made the Rector to access research grants from the Tertiary Education Trust Fund (TETFund). This has significantly made research activities attractive, thus, broadening the pace of research development in the foremost institution higher learning.

Only last year, the management of the Tertiary Education Trust Fund (TETFund) gave Engr Dr Michael Arimanwa an achievement award for his robust efforts at encouraging research and development in Federal Polytechnic Nekede. In the award event held at Transcorp Hilton, Abuja, the Executive Secretary of the Fund, Prof Suleiman Elias Bogoro, profusely commended the Rector for his resilience, creativity and commitment which made his institution a beneficiary of a significant chunk of research funds available for polytechnics in Nigeria. It is noteworthy that it takes only a pragmatic leadership such as symbolized by the Arimanwa rectorship that could produce core researchers whose works stand the test of time. It is gratifying that TETFund did not stop at garlanding the Rector, they also announced an investment of one billion naira in the polytechnic over the next five years. In addition, they declared the institution a Centre of Excellence in Information Communication Technology (ICT).

Great deeds make bold imprints which history records for posterity. The ambitious Smart Campus Project of the Rector which earned him the sobriquet “smart Rector” was delivered with precision. The Rector had embarked on the project to purely digitize activities in the institution, without seeking any accolades. But history took note of it. Today, the Federal Polytechnic Nekede has become a Centre of Excellence in ICT, a feat that is laudable and noteworthy. Notably, the institution has not only computerized procedures in registration, screening and administration, it has also integrated computer-based exams in its test procedures. What this implies is that ICT compliance in the polytechnic is no longer a matter of choice but culture. Thus, Dr Arimanwa envisions a polytechnic where technological inventions would naturally give the institution a global identity.

Today, the Federal Polytechnic under Rector Arimanwa, has just invented an electric car. This car is the end-product of the aggressive research development the Rector instigated in the institution. This car is unique in many ramifications. It does not utilize fossil fuel which leads to the pollution and degradation of the ecosystem. In other words the electric car invented by the polytechnic is eco-friendly. In an era where Environmental Studies and consciousness are taking a centre stage, it is commendable that the polytechnic has come to add impetus to ecological consciousness.

The duo of Cheryll Glofelty and Harold Fromm who propounded the Ecocritical Theory must be happy with the Arimanwa led administration for promoting eco-sanctity. It is commendable also that the electric car does not have an engine. This essentially makes it easy to maintain, making it ideal for low-income earners in any economy. Users would not therefore have to worry about engine parts and maintenance. Again, they may not have to worry about the source of energy to power the vehicle as it uses a solar panel which charges the battery that powers the vehicle. More importantly, the car is noiseless, a quality that reinforces its environmental friendliness.

This is an invention with a difference, indeed.
Since news about the invention of the electric car broke out, there has been a frenzy of some sort among media houses who besiege the polytechnic to see the unique and take a ride. The Rector in his wisdom has promised to take the vehicle to an international innovation centre in Lagos to further showcase it to the world. According to him, “The polytechnic will take this project to Inov-8 hub which is connected to Skill G Innovation Centre Abuja, where potential investors from all over the world could see it and invest heavily on it. From there, the Federal Government through the Ministry of Science and Technology can take it over and enlist it in the budget.” Remarkably, materials used in manufacturing the vehicle were almost sourced locally, making it first Nigerian electric car with considerable measure of local content. It is hoped that the needed support and partnership would be garnered soon to produce the car in commercial units. Indeed, it is a new dawn for science and technology at FedPoNek!

Similarly, the polytechnic under Rector Arimanwa is set to unveil a historic ultramodern furnace which can melt steel within fifteen minutes. The import of this technological breakthrough is that the production of motor spare parts and engine parts would be done with less time and effort. It is a major boost for the Engineering school of the polytechnic as relevant practical sessions can be carried out with precision. Indeed, the institution is bent on producing skilled graduates at both ND and HND levels who would be great resources to the nation. Already, it is a well-known fact that students of the Federal Polytechnic Nekede perform exceptionally in industrial attachments, making them stand out as graduates with great potentials. It is, therefore, beyond a cliché when it is said that “Federal Polytechnic Nekede leads while others follow of they could.”

There is also a remarkable breakthrough in Agricultural Technology as the Federal Polytechnic Nekede makes veritable inventions in farm processing plants. Presently, the Rector would unveil a coconut dehusking plant which would be a huge relief for commercial coconut farmers. It has been acclaimed that coconut farming is a highly profitable business where virtually every byproduct of the plant has a commercial value. What the polytechnic has done, therefore, is to avail the nation with a technology that would improve the value-chain in coconut production. This a commendable step in boosting food security and assisting the nation combat poverty. There is also a rice destoning plant which is central to the processing of rice in commercial quantity. Fortunately, this is coming at a time when the Federal Government is paying considerable attention to domestic rice production and its value- chain initiatives.

The spy-jet which the polytechnic invented would soon be unveiled to the world. This unmanned jet is built to fly to a projected region to take essential security survey and coordinates, the result of which are sent to pragrammed agencies of government. The spy-jet is a unique technological invention that is timely and relevant – at a time Nigeria and the rest of the world grapple with remote and immanent security challenges. It was Nelson Mandela that stated that education is a powerful tool with which to change the world. The polytechnic under Dr Arimanwa is indeed deploying practical education to change the world. Fundamentally, sustainable education is reinforced and underpinned by research. This is the ultimate key with which Engr Dr Michael Chidiebere Arimanwa has propelled technological renaissance in Federal Polytechnic Nekede. God bless the smart Rector!