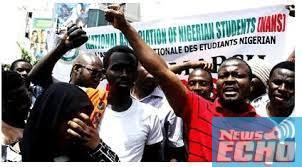 National Association of Nigeria Students (NANS), has reviewed and adopted its constitution, 40-years after formation.
The exercise took place at the University of Port Hart Court (UNIPORT), auditorium, Rivers State, over the weekend, during its 66th Senate meeting.

The President of the Senate of NANS, Comrade Chuks Okafor, who revealed this in a statement he made available to newsmen in Awka, on Monday, said a review of the constitution has become necessary in the face of growing insecurity and threats exposing the fragility of the Nigerian state and to give financial autonomy to members.

News Echo gathered that NANS was birthed in 1980 as a successor to the National Union of Nigerian Students (NUNS) which was proscribed by the despotic and anti-students military dispensation of Gen. Olusegun Obasanjo.

The Students Association is the highest decision making body for students studying in institution of higher learning from university cadre with over twenty (30) million members both in Nigeria and Diaspora, fully committed to the mainstreaming of students and young leaders in governance at all levels with core interest of protecting the dignity and integrity of the students and uniting the students for academic excellence
Stressing further, Comrade Okafor, said that the constitution was unanimously adopted by all members to meet up with the realities of the present times during the National Convention.

According to him, we must acknowledge that the situation in Nigeria demands a quick review of the constitution to help protect Nigeria students.
“NANS reviewed and adopted her constitution; Delineating it according to geo-political zones. It is a giant stride to move the association forward. He noted that the Port Harcourt 2021 declaration under his leadership has come to stay.

He said items in the adopted constitution included; the financial independence of the students both home and abroad, to promote and encourage the socio-cultural and intellectual interests of members, to act as the representative of members at any given circumstances, to maintain good relationship with the Nigeria Universities and to be the recognized liaison between members and the University authorities in the country, to promote and protect the educational interests and welfare of students, to protect/secure the fundamental rights and privileges of members, mostly students and to promote/protect the good name of NANS (Senate), at all times. Okafor, gave Justice, Peace and Academic Excellence as the motto, objectives of NANS.