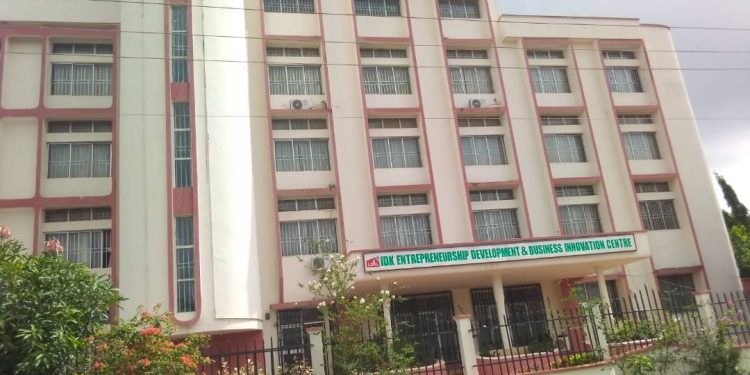 One of the JAMB exam centre in Awka

All centres disgnated for the ongoing Unified Tertiary Matriculation Examinations (UTME) in Anambra state, was on Monday, shut down to obey the weekly Monday Sit-At-Home imposed by the Indigenous People of Biafra (IPOB).

Our correspondents who monitored the order in Onitsha, Nnewi and Ekwulobia, observed that the JAMB exam centres, Banks, Markets, Filing stations, motor parks shopping malls and other business premises were also under lock and key.

In Awka, the exam centres including JAMB office, located at Amawobia bypass via Enugu-Onitsha expressway Awka, was also under lock and key. But commercial activities, especially, commercial vehicles and petty traders were sighted booming.

A female JAMB candidate who expressed her feelings to News Echo at one of the Awka centres and who does not want to be mention in print said she will relocate to the North or South West of Nigeria, if IPOB does not stop threatening the future of Igbo children in their fight for freedom.

According to her,” I have been in this centre, Integral Development Konsult (IDK), Awka, since 6:45am because my exam time is 7am and unto this time, 1:45PM, I am yet to see any exam vigilator. That means IPOB is winning. And this is bad because the situation couple with the ongoing ASUU strike is really discouraging the education in the south eastern Nigeria.

It is better for me as a woman to relocate to other region to get quality education as earlier as possible. The Boko Haram and bandits in the North and OPC in the South West are also agitating but they did not stop their children from participating in the National examination, why the Igbos,” she asked.

She called on the South East Governors to intensified effort to end the sit-at-home menace.

Mrs. Ngozi Nwude-Nduka, the administrator at Integral Development Consult, Awka, who spoke to News Echo on why the centre was shut down on Monday to obey the order, said it took the decision on the ongoing Joint Admission and Matriculation Board (JAMB) exams as a precautionary measure.

“We want to play safe for the safety of the candidates as possibilities of non-vehicular movement may be experienced and hinder smooth transportation process for candidates who will come from far and near for the said examination,” she said.

Mrs Nwude-Nduka noted that the centre, which had held six sessions of the JAMB examination since it commenced on May 6, had not recorded any technical or security hitches.

She said that the centre is a 250 capacity JAMB candidate facility and each session which comprised morning, afternoon and evening schedules on May 6, Friday, and May 7, Saturday, respectively.

Mrs Nwude-Nduka said that candidates posted to its centre have conducted themselves well according to the rules governing external examination only for a few candidates who for logistics reasons missed their schedule for their examination.

The Vice National President, Ohaneze Ndigbo Worldwide, Chief Damian Ogene-Okeke, said that the IPOB struggle will only be handled by the South East Governors.

Attempt to speak with the state Commissioner for Information, Mr. Paul Nwosu, prove abortive, as he did not pick my calls for reaction.

The Indigenous People of Biafra has enforced the Monday lockdown across the South-Eastern States since its leader Nnamdi Kanu was abducted from Kenya in June 2021.