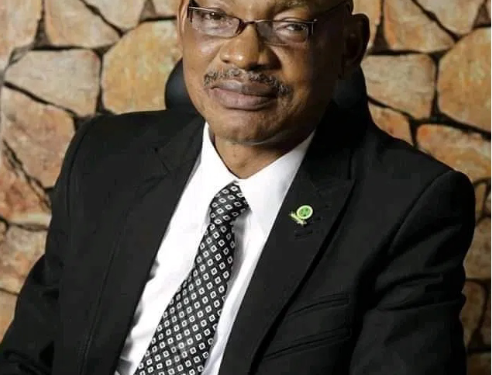 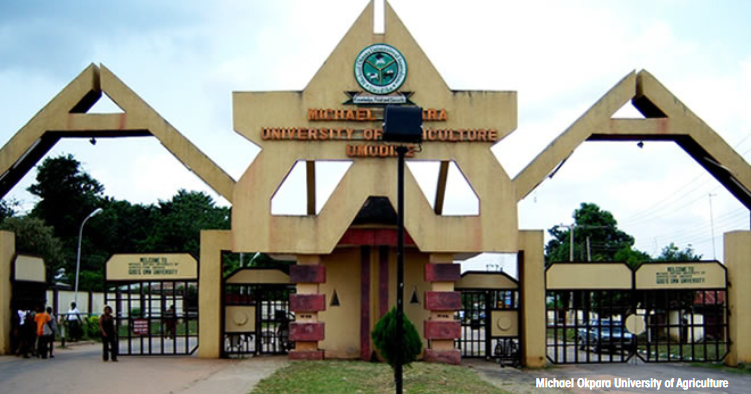 Year 2020 was a year of mixed fortune for the Michael Okpara University of Agriculture Umudike, (MOUAU), Umudike, Abia State. It was the year a new Vice Chancellor of Abia State origin emerged, to succeed the outgoing Prof Francis Otunta.
It was a year the school was rocked by series of salacious allegations of alleged amorous relationship against Prof Otunta by two aggrieved staff of the university. It was also a year academic and non-academic activities were crippled by the long closure of Universities nation-wide following the corona virus outbreak as well as industrial actions embarked upon by members of Academic Staff Union of Universities (ASUU).

But a new chapter was opened in December 2020 as Prof Maduebibisi Iwe beat 28 other, Vice Chancellorship candidates to emerge the 6th helmsman of the university.
Before the emergence of Iwe, the Vice Chancellorship seat of the school had rotated among the five States of the South East with Prof Placid Njoku, the present Deputy Governor of Imo State, drinking the first water of leadership in from 1993 to 1999. He was succeeded by Prof Ogbonnaya Onwudiwe (Abia) who reigned from January 2000 to Feb 2006.

In March 2006, Prof Ikenna Onyido (Anambra) took over and his tenure ended in February 2011. Prof Hilary Edeoga (Enugu) succeeded Prof Onyido in March 2011 and finished in 2016 with Prof Francis Otunta (Ebonyi) taking over in March 2016 and will be completing his tenure in February, 2021.

With the seat of power having rotated among the five States of the South East, the stake became higher in 2020, towards the selection process, with many interest groups, clans, youth groups, student groups and even political interests demanding the slot of the VC. In the front line of agitations for VC slot were various communities and academics from Abia State, who felt that other South East States were being “unfair” to Abians.

These claims of unfairness were built around the sentiment that Abia State had produced the VC of the school just once in the person of Prof Ogbonnaya Onwudike. These claims of marginalization in no small way, created a bad blood among staff of the school, who also wondered if merit should be sacrificed on the altar of sentiment and parochialism.

During the era of Prof Ikenna Onyido as VC, a section of the workforce at MOUAU and the host State, Abia accused him of allegedly “Anambranising” the school in areas of employment and contract awards.
The same thing happened during the time of Prof Hilary Edeoga who was also alleged by another group of critics of giving undue advantage to the people of Enugu State in areas of employment and promotion.

Then came Prof Francis Otunta who also faced the strongest challenge of his life following two petitions written against him by two academic staff, Dr Patricia Mbah and Dr Nelson Udenze, who accused the incumbent VC of alleged sexual scandal and illegal demotions.
But the Governing council of Michael Okpara University of Agriculture, Chaired by Lawan Zayanna, later cleared Prof Otunta of all the allegations, explaining that Dr Patricia Mbah and Dr Nelson Udenze were properly placed on the grade level they belonged, adding that no vendetta was visited upon the two petitioners.
In fact, the allegations written against Prof Otunta by the two staff caused tensions in the school for a few weeks before a press conference was held at 9pm in February, 2020 by the Governing Council of the school to clear Prof Otunta of all allegations, with the Governing council describing the allegations as baseless and aimed at tarnishing the sterling reputation of the institution.

Explaining the reasons for holding the press conference in the night, Chairman of Governing Council, Lawan Zayanna said it was after long, careful and detailed investigation of the issues: allegations by the two persons which lasted till late evening, while also apologizing to the press for the late press briefing.
He concluded by giving a clean bill of health to Prof Otunta and members of the Governing Council on the accusations, insisting that the petitioners had no proof to back their cases. The Governing Council Chairman said Dr Patricia Mbah in particular allegedly abandoned her job in MOUAU and travelled out of the country without authorization, thereby breaching the rules of her duty and employment.

It is on record that every VC who reigned in the university inked a page of achievement and also received punches of criticism from those who saw nothing good in his performance.

While each VC was decorated with the garlands of praises by his admirers inside and outside campus, others saw nothing good in their performances.

Iwe’s emergence and the fresh challenges in MOUAU:
Before December 2020, over 15 Professors had struggled to succeed the outgoing V C, Prof Francis Otunta. The number increased by the day, rising to 29 in December, 2020 with candidates from various South East States, especially Imo, Anambra and Abia States flaunting their qualifications and visions, to become Vice Chancellor.

Three factors became the subject of campaigns for the VC-seeking academics they were: state of origin, academic records and campaign promises.
However, Prof Maduebibisi Iwe, a Deputy Vice Chancellor MOUAU who hails from Amuda Isuochi, Umunneochi LGA of Abia State got the job on December 26, 2020, ending the tension created by the spontaneous protests organized held in the election week by various interest groups.
The final result of examination had been scheduled to hold by 10th December, 2020 but has to be rescheduled till 16th December after a group of youths, representatives of host towns and student groups stormed the school community and Umuahia, the Abia State capital, chanting angry songs while threatening fire and brimstone, if a candidate of Abia origin did not emerge as VC.

A Professor of Food and Technology and the President of Nigeria Institute of Food Science and Technology(NIFST) would be mounting the seat of leadership as the tenure of Prof Francis Otunta rounds up in February, 2020 but a lot of challenges await him which include:
Reduced students’ population:

During the tenure of Prof Hilary Odo Edeoga, the 4th VC, student population in MOUAU increased appreciably and the rise in the population was attributed to some factors like the inclusion of some courses of study to the existing ones which attracted several interested JAMB candidates attention.
The proximity of the University to Umuahia, Abia State capital, gave the institution another edge as many civil servants, traders and other artisans conveniently combined their works while still studying in MOUAU.

Another factor that boosted the school population was the fact that three other institutions namely Federal Agriculture Research Institution, National Crop Research Institution, National Cereal Institution Abia State University, Umuahia Campus which hosts the ABSU faculties of Agriculture and Law were all at close range to the school, thus enabling some students to even study two courses in two different institution at the same time, if they had the financial wherewithal.
But at the twilight of Edeoga’s tenure, the school suffered some blows as the National University Commission (NUC) and the Federal Ministry of Agriculture wrote the school to inform it of plans to stop some programs being offered by the school.

According to the school’s source, some of the courses offered by the school ran contrary to her mandate as a core agricultural institution and the school was asked to scrap the programs and harmonize the fate of the existing students in the affected Departments.
Few weeks after the tenure of Prof Otunta kicked off, the NUC eventually began the implementation of its directive and the development created tension in the school environment with several of the affected students being asked to move to other departments. While many students coped in their new departments, a few others relinquished their already secured admissions and opted to seek admission elsewhere rather than study what they referred to as ‘strange courses’.

This shift in fortunes affected the economic base of the school the existing student population dwindled, thereby affecting the economy of both the host communities, owners of private student lodges as well as transporters who smiled to the bank when the school had a large population base.

Demotion of professors:
Demotion of 28 Professors in 2017 by the Governing Council, was another challenge that shook the foundation of the school as the school authority made it clear that the affected academic staff were not victimized but placed on the levels they merited, after allegedly jumping to promotion without allegedly following the laid down process.

Most of the affected professors, some of whom were either demoted to positions of Associate professors or Ph.D statuses or even other lower grades, described their demotions as illegal and vindictive, insisting that their academic uprightness were not in doubt.
Again, at its 21st emergency meeting held on Monday, 13th to Thursday, 16th May 2019, 24 Professors were demoted to 18 associate professors while 6 others went down to positions of senior lecturers.

But the MOUAU management in responding to the issues said the stopping of some programs in the school was as directed by the National University Commission (NUC). On the affected lecturers, the school’s Governing Council said the decisions were as a result of series of alleged petitions written against the professors by some staff of the school.

Also, over 300 non-academic staff who were employed by a previous administration of the school were also laid off, in an exercise the school’s spokesperson, Adanma Odefa denied.

The PRO rather maintained that some illegally employed staff of the school whose employment did not follow the due process, were suspended from duty, promising that after some of the affected individuals would still be recalled if their employment were found to have followed the due process.
However, winning the fight against cultism and the development of core agricultural programs happened to be among the great achievements recorded by Prof Otunta, described as the outgoing quintessential mathematician.

But another chapter has been opened in the school as Prof Maduebibisi Iwe takes over from Prof Otunta in the first quarter of 2021 to bring in his own idea of leadership. So far, academic activities are back in the school following the suspension of strike by the ASUU while students are enthusiastic of free flow of learning periods, to cover for the lost grounds.

Abia State government also in a congratulatory message to the new Vice Chancellor, Prof Iwe, expressed satisfaction with the selection process which produced the food scientist as the school’s helmsman.

The State government in a message signed by John Okiyi Kalu wished the school the best in achieving her vision.
The hopes are very high that every interest group both inside and outside the Umudike campus would work towards the success of the school while every genuine agitation should be amicably attended to, in order to benefit the school, staff, students and host communities.