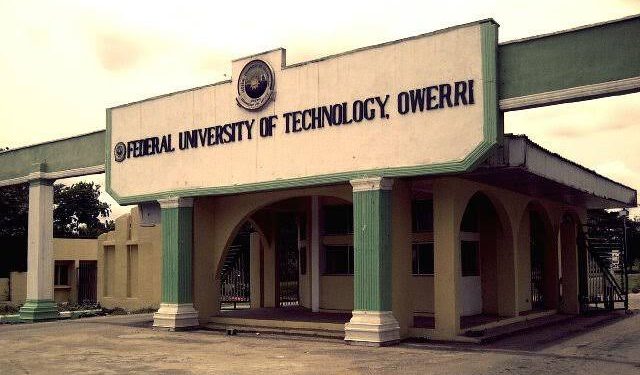 The outgoing Vice Chancellor of Federal University of Technology Owerri (FUTO), Professor Francis Chukwuemeka Eze, has rolled out his scorecards within five years in office.
Briefing media professionals at the school’s Senate Hall on Tuesday, the outgoing Vice Chancellor, noted that despite challenges, he and his team were able to achieve a lot of good things for the school, saying most of the agenda he outlined during his interview with journalists five years ago especially to place the university among the top universities in the country had been materialized.

He stressed that the students of FUTO are well taught and imbued with deep academic knowledge in their various colleges, adding that employment opportunities have been created as some courses have been fully accredited, pointing out that they had made positive impact in various disciplines, as the university has attracted international recognition as centre of academic excellence, maintaining that the university had introduced policy document which helped the school’s research and development policy.

Eze hinted that in terms of infrastructure, FUTO under his watch “has done very well as many structures have been witnessed: the building of school toilet, roofing of academic planning offices, construction of bridges, roads, new FUTO park, female/male hostel, living rooms, perimeter fencing, mini stadium, deputy Vice Chancellor’s office, centre for waste management and power supply, others are still ongoing”, he said.

He reaffirmed that the training of staff on development has been consistent and that he has established online studies, FUTO farm, saying he has cordial relationship with the staff and students.

Eze added that FUTO had fully participated in community service for host communities by way of giving them free healthcare, construction of toilets at the markets, support to monarchs, presidents- general, given employment to people and the distribution of hand sanitizers to the people to prevent disease especially Covid-19, mentioning some challenges confronting FUTO as “land encroachment and collapse of FUTO bridge which endangered movement in FUTO community”, appealing to government to come to their assistance.