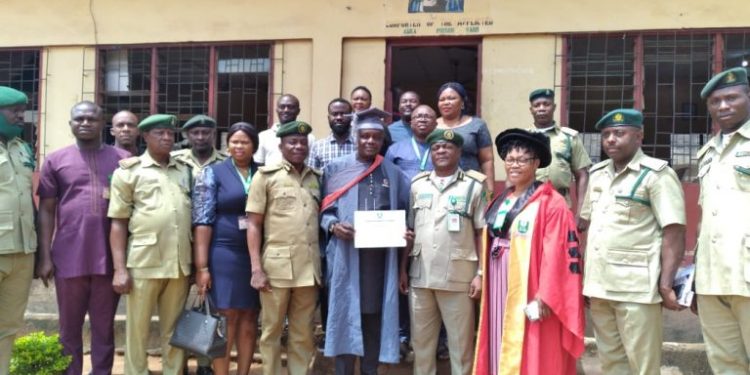 A former Awka Correctional Centre inmate, in Anambra State, Livinus Ugwu, has earned a degree in peace and conflict resolution of the National Open University of Nigeria (NOUN). Ugwu, it was gathered was discharged from the centre in 2018 after serving a 21-year-jail term. He began the degree programme while in incarceration.

Receiving the certificate from NOUN on Wednesday at the correctional centre, the visibly excited Ugwu attributed his success to commitment and dedication, while appreciating both the authorities of the Correctional Service and NOUN for the opportunity given to him to advance his education.

He urged people in such circumstances not to allow their condition to constitute a barrier to their progress in life, stating that such setbacks should be seen as a stopgap.

He said, “The world gathered today because of a one-time inmate like me. I learnt so many things while in prison, including tailoring and laundry because I brought myself low.

“I thank officers of the Correctional Service and the Open University for the opportunity. They were so passionate, they took us like their own children. I started from Warri before I was moved to Onitsha where I established adult education. Don’t allow the four corners (prison) to weigh you down. See here as stepping stone to greater heights.”

Presenting the certificate on behalf of the university, Director, NOUN Awka Study Centre, Prof. Scholastica Ezeribe said the programme was targeted at imparting lives, including providing education to the inmates.

The director said, “The programme is a clear demonstration of the importance the institution (NOUN) attached to inmates’ education. We believe in rehabilitation through education, no one is a write off.

“That’s why we give scholarship to inmates, even after being discharged; so as to equip them to be responsible citizens after leaving the prison walls.”

Speaking, the Controller, Anambra State Command, Nigerian Correctional Service, Pat Chukwuemeka, said the scheme, which he described as his brainchild, was initiated for the educational development and skill empowerment of inmates.

Appreciating the programme facilitators for their assistance to the graduate, Chukwuemeka hailed the graduate for achieving the feat despite being in incarceration, appealing to other inmates to emulate him to upgrade themselves.

NOUN desk officer, NCoS, Dr.Henry Nwokoye, urged the inmates to see their situation as blessing in disguise, as well as opportunity to uplift and add value to their lives.