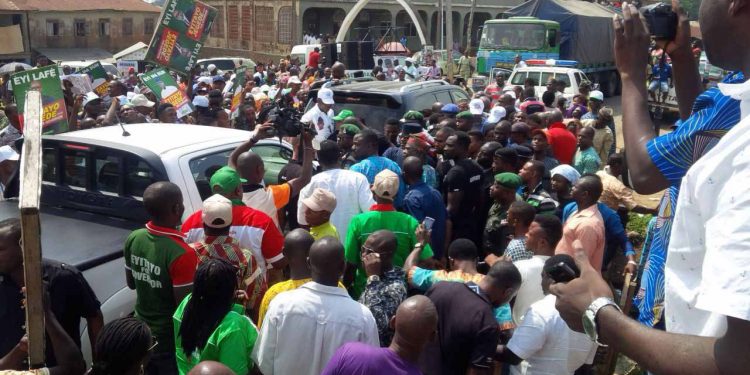 The campaigns are here again. Political parties and candidates are deploying everything to convince innocent voters that they mean well and have clear agenda to transform society. These statements give an indication of what matters to the candidates and their visions of the future of their societies.

Ideally, a manifesto is a compilation of the broad vision, development philosophy, ideological leaning and sector-specific policy options that a political party intends to pursue once elected.

The reality in the Nigerian political culture deviates, albeit in a slightly different way, from the denotative nuances of a manifesto. In Nigeria, a manifesto is more of a tradition, a political culture and not an essential requirement in a political contest. Whether citizens take it seriously or not is another matter. The belief in Nigeria, following historical precedence, is that manifestos are almost acts of confidence trick – soundbites and promises that are intended to trick but never to be kept. Nevertheless, the expectation is that all political parties and presidential candidates will present their manifestoes or agenda to the public.

Two of the four presidential frontrunners in Nigeria’s 2023 general elections have released what are somewhat documents of manifestos. Atiku Abubakar of the Peoples Democratic Party (PDP) released an abridged version of his manifesto captioned the “New Covenant” or “My Covenant With Nigerians”. Bola Ahmed Tinubu of the All Progressives Congress (APC) has issued a “Hope Renewed”.

One common thing to both manifestos is that they need to show more details on how they intend to accomplish what they have outlined as their programmes for the revival of Nigeria. Labour Party’s Peter Obi and New Nigeria People’s Party (NNPP)’s Rabiu Kwankwaso are yet to release any manifesto officially. Peter Obi had argued that getting wordsmiths and consultants to write and package a manifesto is not enough, candidates should be able to speak to Nigerians about what they plan to do, how they will do this and where the funds will come from to fulfil their promises.

The campaign managers and spin doctors of the two main parties, APC and PDP, are already jostling to place their manifestos at the centre of media and public attention, whilst attacking the essence and content of each other’s manifesto.

Dele Momodu, a journalist and media manager of the Atiku presidential campaign launched the first attack by describing Tinubu’s manifesto as a bad recycling of late MKO Abiola’s 1993 manifesto, calling it the “APC manifesto of lies”. As expected, he got an immediate reply from Festus Keyamo, who described the Atiku-Okowa manifesto as merely a copy of President Buhari’s projects. At least Nigerians who have consumed enough bad news now have some comic relief.

We expect these attacks, which are part of election campaigns and justling. However, these contesting soundbites are not enough to satisfy the political appetites of the electorate. I expect thorough and critical analyses of the manifesto of each party by its opponents, with the view to interrogating the document and questioning the relevance of its content to our common aspiration.

Nigerians should examine the practicality and workability of the ideas and policies contain in these manifestos and task each party’s campaign managers to explain to the public some of the grey areas identified. I also expect civil society organisations, the media and public commentators to delve into these manifestos and dissect them in order to educate the public on their contents, and the merits and demerits of the ideas, policies, and assumptions contained in these documents. The aim is to enlighten the citizens, because only an enlightened citizenry will vote for candidates whose visions align with their developmental needs and aspirations.

Once elections are over, the parties and the candidate jettison their manifestos and its promises. What if we treat voting as a transaction between the voter and the elected officials, which is a social contract? Should we not hold elected officials accountable when they deviate from promises they made in their manifestoes, upon which they were voted into office?

Can citizens take legal action against parties and candidates for not implementing the provisions of their manifestos? If a prospective voter has voted on the basis of a promise, should the voter not have the legitimate expectation that the government voted to power would perform on the basis of their contract? Therefore, citizens need to take note and keep track of party manifestos and candidates’ promises during election campaigns in order to hold them accountable.

Besides, citizens must be able to remove non-performing leaders before another election cycle. Though it runs a parliamentary system, the UK changed a prime minister in 44 days because she could not deliver on her campaign manifesto.

Yet, there is no indication that the content of a party’s manifesto substantially influences how citizens vote. 90% of eligible voters, a good chunk being illiterate by default, in Nigeria do not bother about manifestos. Even candidates need to learn the content of their manifesto document. It is time we paid attention to the manifestos of parties and candidates, in order to interrogate them, keep track, and hold elected officials accountable. We need citizen mechanisms or actions to hold candidates responsible for their manifesto promises before periodic elections. That way, we shall deepen our democracy.
In countries such as Bhutan and Mexico, political parties are required to submit a copy of their election manifestos to the Electoral Commission before the general elections.

Manifestos are issued to the public only with the approval of the Electoral Commission. This has a way of making the government perform its manifesto promises. A mechanism to track and hold candidates accountable would ensure that promises merely to induce voters are not made and that promises are sincere and well-conceived.
News Echo implores all stakeholders in the Nigerian project to use every opportunity available to interrogate all electoral promises within and outside the manifestos.

We need to understand the vision that a political party’s candidate is selling to voters and create means of holding him or her to his or her words. The media is also advised to focus on the proper enlightenment of voters on the basis of the promises of candidates as contained in their manifestos and other political statements