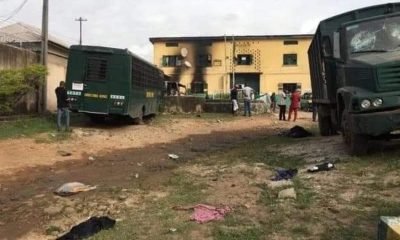 It was a rude shock for the residents of Owerri when they woke up to a black Easter Monday marred by a violent jail break in which nearly two thousand inmates of the correctional home secured their ‘forced’ freedom.

The night breaking the Easter Monday morning had gun shots booming all over the night disturbing the peace of many Christians and other residents who had awaited a joyous celebration. Owerri people got what they never bargained for.

The attack on Owerri prison and the State Police headquarters have added to elongate the sad tales of serial violent attacks that had characterised the Igbo land in the past couple of weeks. Igbo land is known for its peaceful disposition and never in the history of this country is it known that the Igbo attacked any person or group of persons

The aggression each time has always been against them. It is on this premise that many are confused over the spate of violent attack especially against the police which has engulfed every state in the South East. While some people may have fingered the Eastern Security Network (ESN) which it has also denied, as possible culprits others look in the direction of herdsmen who they argue may have infiltrated the area just to foment trouble in the manner of the northern experience.

Few days ago, Ebonyi community witnessed the loss of 20 people in violent attack by herdsmen during which many others were rendered homeless. Shortly before that Onitsha had its own share of killing which prompted military presence in the area. Imo and Abia have had scores of policemen and police stations attacked and burnt. Ditto for Enugu State.

These clearly are sad developments, a marked departure from the peace and serene environment the south east is known for.
The Owerri incident holds a lot of food for thought. It raises very big question on the capacity of the security operatives to protect lives and properties which as the agents of government it is their direct responsibility to do. The audacity of the gun men to venture into the domain of the police and leave unscathed speaks volumes. How safe is the common man we ask?

That many Nigerians are still bearing very sophisticated assault rifles again raises questions on the success or otherwise of the police authorities efforts in mopping up arms. This has revealed that huge cache of arms must be in the hands of many Nigerians, no wonder the increasing level of armed attack everywhere you go.

A quick fall out of the Owerri incident is the speed with which Gov Okezie Ikpeazu has imposed curfew in the two major cities of the state, Aba and Umuahia, if anything to prevent a similar occurrence in the state. The implications of the curfew on economic and social activities are not lost on the people

News Echo is alarmed at the recent development which may be exposing the South East to the wrath of the military operatives. We frown at this ugly situation which may be putting the lives of innocent people at risk should there be a military response to the matter. The matter of Orlu where the Imo governor involved military operation is a case in point.

The South East political leaders and indeed all stakeholders should rise to this challenge and put a final halt to it before it hits an uncontrollable dimension. A stitch in time saves nine