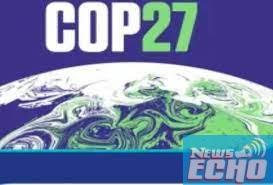 Baring all odds, Africa is set to host the 27th edition of the now famous Conference of Parties (COP) of the United Nations Framework Convention on Climate Change (UNFCCC), which debuted in Berlin, Germany, in 1992. The COP27, slated for the Egyptian Sharm-el Sheikh peninsula in November this year, marks the fifth time Africa will be hosting the climate summit, having been previously hosted by Morocco (2001 and 2016), Kenya (2006), and South Africa (2011). According to a UNCTAD 2021 report, climate change constitutes an existential threat to the lives and indeed livelihoods of some 490 million people living in extreme poverty across Africa.

As Africa’s big brother, Nigeria bears a chunk of the continent’s climate impacts in many areas. For instance, the country’s extensive coastline, stretching approximately up to 853 kilometres, has been receding over the years due to overlapping waves that swallow the shores of the Atlantic Ocean in the southern region. With the sea level already projected to rise by about 65cm by the turn of the century, a further erosion of the shorelines will only deepen the environmental crisis the country must deal with.

At another level, rivers are drying up, while desertification is taking its devastating tolls across the arid zone of the far Northern region. The loss of biodiversity and fatal floods that ravage farmlands and cities are other challenges confronting the world’s most populous black nation. Similarly, degradation of the tropical forests, depletion of floras and faunas due to illegal deforestation, as well as criminal wood logging, have been on the increase. It must be noted, however, that the problem of deforestation in Nigeria is being exacerbated by the prohibitive cost of cooking gas and kerosene, and the virtual absence of alternative clean energy for use by the poor masses.

The impact of climate change is also tellingly grim in the area of agriculture and the quest for food security in Nigeria. It is a cynical irony that a population of over 200 million people is being fed largely by rural peasant farmers using traditional hoes and cutlasses as major tools. By default, such farmers who are not agro-tech savvy can only cultivate crops that are subject to the vagaries of unstable climatic conditions. Of course when the rainfall is excessive, or the drought is extreme, farm produce harvest is abysmally poor, resulting in a disequilibrium between demand and supply, and causing galloping inflation of food prices.

For a country that is in dire need of industrialisation, irregular power supply is a major disincentive for manufacturers and other entrepreneurs currently at the receiving end of climate impacts. And with barely 3,500 MW of electricity generation, factories and businesses that are embedded in Africa’s leading economy are weighed down by the quest for alternative energy sources. It is estimated that over 60 million Nigerians rely on generators powered by fossil fuel for 48.6% of the electricity required in their homes and businesses, and at a huge cost of $14 billion yearly. The impact is no less serious in environmental waste, as Nigeria produces 32 million tonnes of solid waste yearly, with plastic waste constituting 2.5 million tonnes, and making the country one of the highest waste producers in Africa.

Yet, the challenges posed by some of the climate impacts pale into mild threats in the face of the existential danger inherent in Nigeria’s greenhouse gas (GHG) emission footprint, which was estimated at 126.9 million tonnes as at 2020. In fairness, Nigeria has always been in motion to keep pace with the global advocacy on climate change. As a party to the UN Framework Convention on Climate Change, it ratified the Kyoto Protocol in 2004 and soon followed it up with a National Policy on Climate Change, aimed at building an environmentally resilient society. The nation’s interest was further concretised in 2012 when it was admitted as a voluntary member of the UN Environment’s Climate and Clean Air Coalition, saddled with the mandate to reduce climate pollutants in ten high-impact sectors of the global economy.

President Muhammadu Buhari took a defining step in 2015 when he committed Nigeria to the Paris Agreement and presented the country’s Nationally Determined Contribution (NDC) with a pledge to conditionally reduce GHG emissions by 45% by the year 2030. The Nigerian voice again resonated last year at the COP26 in Glasgow, Scotland, where President Buhari announced a 2060 net-zero emissions target. He thereafter signed into law, in November 2021, the Climate Change Act, which commits the federal Government to measurable action plans for climate change mitigation and adaptation.

As Nigeria prepares for a robust engagement with other state and non-state actors at the fifth global climate summit in Africa, President Buhari must ensure the seamless harmonisation of the country’s environmental policies and actions, and the on-boarding of all critical stakeholders in energy transition, climate financing, renewable energy, biodiversity, waste management, and the media. The creation of the National Council on Climate Change (NCCC) and the appointment of veteran environmentalist, Dr Salisu Dahiru, as pioneer Director General, are steps consciously taken. It is hoped that this step will now accelerate the country’s climate actions and convert the age-long motion into fast paced movement.

Ahead of the COP27, Nigeria’s crucial tasks must include setting a robust agenda for, and coordinating Africa’s strategic response to, the global climate debates, especially the blame game on culpability for GHG emissions, the tardiness in pegging global warming at 1.5 degree Celsius above pre-industrial levels, the dilemma over green and blue hydrogen options, and the resistance in redeeming the annual US$100 billion pledged to Africa to finance climate mitigation and adaptation, among others. The top industrialised nations who are known to be culpable for GHG pollution must be held accountable for climate change impacts being experienced in Africa today. Nigeria is duty bound to lead the charge.

The 2009 California Changes to ESI Law – Evolution of E-Discovery