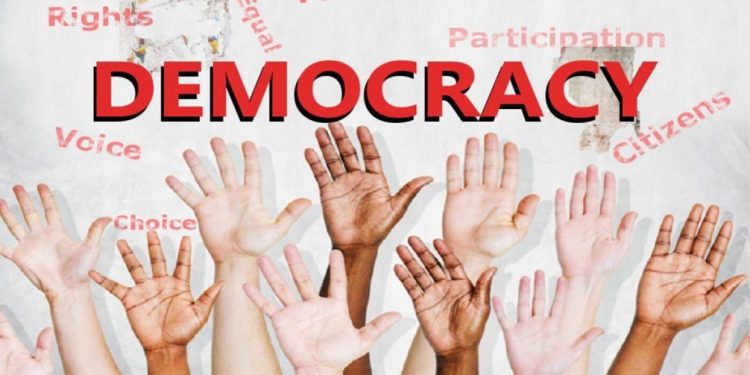 Our democratic process is under siege by politicians. One of the issues that have continually threatened our democracy is the absence of internal democracy itself. The elementary definition of democracy is that it is the government of the people for the people and by the people. This simply means that democracy is people-centric.
In our local parlance here we have always been known to shout and hail that power belongs to the people. In fact the defunct Nigerian Peoples Party (NPP) of yesteryears had it as its slogan: ‘Power to the people”.

Democracy is a global phenomenon and is touted as the best form of government. The little elementary knowledge in school teaches that it originated from Greece but popularized and strongly rooted in countries like America and Europe.

Democracy is a beauty to watch in the so called civilized societies. Africa copied it by virtue of colonization and has been struggling with it. While we can beat our chests and say that it is working wonders in those climes we cannot say the same thing in Africa. It was not long that African countries in totality embraced democracy.

Military rule had hitherto held sway and had called the shot. Time appears to have taken the back seat when they intermittently seized power. Military rule by the nature of its governance style is described as an aberration. They impose their will and do not respect the wishes of the people.

Little wonder democracy is highly prized and valued but the practice of democracy in our country is something that calls for questioning on the sincerity and seriousness of the practitioners to uphold its sanctity. Since the emergence of the second republic, the People’s Democratic Power (PDP) held power for 16 unbroken years before they were dislodged by the All Progressives Congress in the last three years plus.

One of the factors that has been generally identified and acknowledged is that what led to its loss of power is the clear absence of internal democracy neither did external democracy mean anything to it. This singular factor which caused the imposition of candidates on the party and on the people led to massive protest resulting in erosion of membership and sabotage.

The absence of internal democracy in the PDP created opportunities for money bags that lacked credibility as well as god fathers to anoint their god sons into political offices. The end point is that democracy is not only short-changed but bad governance held sway everywhere. Up till date political pundits opine that we are still making mockery of democracy and are yet to start the journey. This may appear true if weighed in the balance of democratic ethos.

The story is not any different with the All Progressives Congress (APC) confirming the speculations among political observers that the issues with our democracy is not the civilian rule itself but the role of the practitioners. Our politicians lack the requisite discipline needed to run a democracy. Their greed to dominate power is unrivalled.

The issue of lack of internal democracy has continued to rear its ugly head and became pronounced in the just concluded re-run elections especially in the Imo APC. The party from its primary election had thrown up two candidates who continued the contest for their candidature in the law courts. Not even the party leadership was able to resolve the challenge which made mockery of the party before the public.

The situation culminated in the party eventually not fielding any one because both candidates had secured different court rulings against each other. This is just one case among myriads others.

If the political parties are disciplined enough to observe internal democracies this would save the polity not only unnecessary bickering among politicians but also our courts from being clogged with cases. If the parties are not able to manage their internal issues properly what is the guarantee that they can manage democratic challenges at a larger scale when it involves externals. This is the crux of the matter as our success is dependent on practicing democratic ethos.