How well do South East governors know their kit and kin? 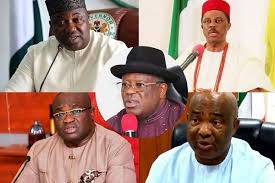 At the height of the Oyigbo killings precipitated by the EndSARS protest, knocks, pressure had mounted on Gov Nyesom Wike of Rivers State over the reprisal attacks by the military. Wike had ordered the military to invade the place in search of Independent People of Biafra (IPOB). The South East governors in reaction alongside other Igbo political leaders had visited Gov Wike and other leaders from Rivers State to jajw jaw over the matter.

In the interaction, Gov Dave Umahi as the Chairman of South Gov’s forum led the group and spoke on their behalf. In his presentation the Ebonyi State governor stated in an obvious reference to Mazi Nnamdi Kanu that he finds it funny that someone should expect to claim areas in other states

It doesn’t sound pleasing that a seating governor who is supposed to be protecting the interests of his people appear to be claiming or pretending, that he doesn’t know that the Igbos by a policy of divide and rule after the civil war were scattered, in other states outside the core 5 Igbo states of the South East. When Benue State was created in 1976 some of the areas that appropriately belonged to Ebonyi was ceded to them.

It would be a wonder if the governor would claim not to know this or was he just playing to the gallery to please some powerful interests up there? Over 600 communities from Ezza, Izzi, Ezamgbo, Effiom which should be in the present Ebonyi were reportedly moved to Benue without their consultations. It was done because of arbitrary political considerations to weaken and reduce the strength and capacity of the Igbo States.

It is close to 50 years that the people were severed from their roots and they have not benefitted from any infrastructural development of their states like roads, electricity, hospitals etc. Suffering has been their lots as they don’t feel the presence of any government. It is heart rending that they are not in Ebonyi nor are they accepted in Benue.

This is the same scenario in Rivers, Edo, Akwa Ibom, where many Igbo communities are suffering the same fate as those in Ebonyi. Many are of the views that irrespective of their state of location Igbo socio-political groups like Ohanaeze Ndi Igbo should still link up and identify with their kits and kin forcible taken away and fight for them where necessary.

We are aware of the reported case sometimes ago credited to the federal government which sought to grant free visas to all Fulani into Nigeria from wherever they may be coming from. This was given vent by the Bauchi State governor, Bala Mohammed who in a live program at Channel Television declared openly that they are trying to bring every Fulani in Africa together because they don’t have nationalities.

According to him, “we are trying to bring all the Fulani in one-fold and try to arrest their traditional practice of moving from one place to the other. The Fulani man is a global or African person. He moves from Gambia, to Senegal and his nationality is just a Fulani man.” If this is coming from a sitting governor seeking to protect his kit and kin outside Nigeria what is the justification that Umahi would be denying his own people.

The comment from the Bauchi governor poses a great challenge to the so-called Igbo governors and other Igbo political leaders. What is perplexing is that none of the other Igbo governors ever made any attempt to correct Umahi signifying that their silence indicates consent to his statement since he is speaking on their behalf. This is a clear betrayal and demonstration of lack of concern of Igbo interest.

News Echo wishes to ask where lies the meaning of the Igbo philosophy of “Onye aghala nwanne ya” (be your brother’s keeper). Consciously or unconsciously Umahi and the South East governors may have sent a wrong signal and a confirmation that the Igbo are not united and lack brotherhood as can be found in a typical African society.

That trip of the South East governors has received knocks from well meaning Igbo leaders and professionals and groups who condemned their action and comments. Their actions are seen in many circles as confirming the allegations that they are stooges to the northern power base because of their selfish interest

We call for a change of heart. While the other ethnic groups are jealously guarding their interest the average Igbo man is not impressed with the efforts of the Igbo governors. Not even a call for a commission of inquiry has been made by any of them despite the numerous killings of Igbo boys even when it has occurred under their noses without provocation.