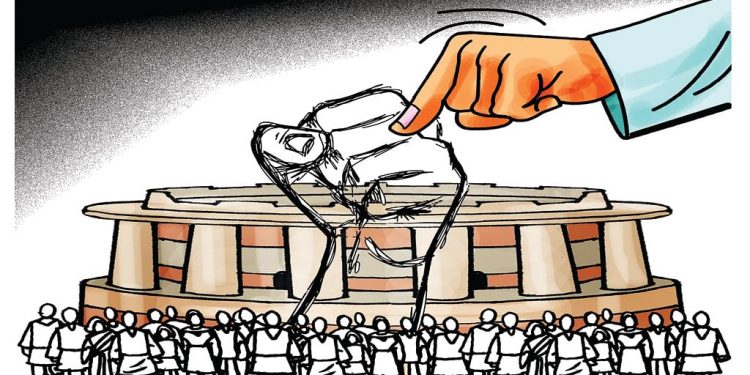 Many Nigerians are shocked that the National Assembly (NASS) have faltered again when an opportunity presented itself for our legislature to advance our democracy forward. Tongues are wagging strongly in serious condemnation of the rejection of the electronic transmission of electoral results.

This amendment which forms part of the longed sought after electoral reforms craved for in the last election was expected to improve the transparency of our electoral system and give credibility to the system as is the case with many other democracies but the NASS decision on the matter have put paid to the dream.

The commentaries on the issue are like different strokes for different people. Some political observers have adjudged the Senate decision as unconstitutional given that it seeks to divest the Independence National Electoral Commission (INEC) of its constitutional powers to conduct election and investing same on the National Communication Commission (NCC)

Section 78 of the Constitution which yields the power to organize, undertake and supervise all elections to INEC went further to restrain that INEC operations shall not be subject to the direction of anybody or authority. To the extent of this inconsistency the Senate decision could be thrown out if challenged in a competent court.

Aside constitutional provision, many others have dubbed the NASS members action as hypocritical in their approach, lamenting that in an age where the government is trumpeting and encouraging the use of Information Communication Technology (ICT) in driving administrative processes to achieve credible outcome, its political leadership are now shying away from adopting same for such a critical issue as election.

The argument that majority of the areas cannot be connected flies in the face of the successes recorded by commercial institutions especially monetary and telecoms business outfits who still carry out transactions in same areas. Transmission of results could be as simple as deploying phone communication or satellite resource.
One of the draw backs of our democracy is the inability of the electoral process to throw up credible leadership. The system has since been running on a doubtful process characterized by outright rigging and purchase of votes. The decisions of the electorates have not been allowed to count and the result has remained bad governance. It has been an endless process.

Many Nigerians would not be faulted with their strong suspicions that all bothered on the intention of the ruling class to continually rig and defraud the process and keep the nation backward running in pains. Nigeria would have been seen a notch higher among advancing democracies if it had taken the bold step to grab the opportunity.
Feeling the pulse of the people and the attendant reaction it is very clear the NASS decision is a departure from the opinions of the generality of the people and that is not democratic.

It is simply a reflection of the selfish interest of a minority privileged class who do not appreciate the relevance and importance of good governance.
News Echo wishes to request the President to withhold assent to the bill while causing a review of the entire exercise to ensure that appropriate technology is deployed in the areas that may prove challenging. This is possible if the leadership is committed to a transparent electoral process.

2023 must not elude Igbo – Ohanaeze Ndigbo

I’m proud of you’, Buhari commends Umahi for defecting to APC