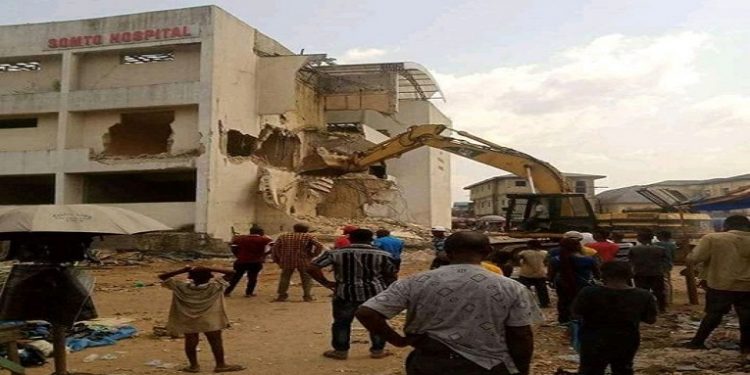 We live in a world of scarce resources. Our situation in this part of the globe is worsened by the unfriendly economic realities which make the utilization of even the scarce resources more critical and intolerant of any wastage. So many infrastructural needs especially in the area of health are far to come by.

The consequences are that the governments have continued to fail in its duty to provide the health care services to the people.

This is the reason many people are crying blue murder over the demolition of a gigantic imposing hospital structure built by the government of Owelle Rochas Okorocha in the space vacated by traders at the Eke Ukwu market.

The Somto hospital named after a 10-year-old boy that was a victim of the military shooting in the effort to forcefully exit the traders was nearing completion by the Okorocha administration before he quit office.

The government of Gov. Emeka Ihedioha set up a committee to examine the desirability `of utilizing the structure or return of the market. The committee voted for the return of the market and adjudged the structure grossly deficient for use because according to it, it failed integrity test and poses great danger to users. It is reported to be one of the failed Okorocha projects which were pencilled down for demolition because according to the Nigerian Society of Engineers they were considered substandard.

It must be recalled that similar structures built by Okorocha like the bridges, tunnels were so declared and even some school buildings reported to have collapsed in parts of the state and many in decrepit state.

The former governor has since condemned the demolition describing it as huge economic waste even as he wondered why a market should take pre-eminence over a hospital. In his words, the physical structure was ready but needed to be equipped.

So many comments described as political had attended the destruction. It would be recalled that previous administration of Udenwa, Ohakim and even the military were fingered to have attempted to remove the traditional Eke Ukwu market but got resistance from the indigenes who felt it is traditionally wrong to move their ancestral market. Okorocha did what was considered unthinkable in the manner he forced traders to relocate.

Those who criticized the destruction of the building and the return of the market hinge their arguments that there are markets within the state capitals which the traders have refused to occupy and wondered why the government is returning to a place that has been left unoccupied for over three years. They view it that market does not appear in the priority list of the government at present when there are other infrastructural deficits.

Others who lament over the destruction on account of the wastages arising from the huge values sunk into the construction query if there were no other remedial efforts that could have been deployed to save that humongous structure. Some insist that those who identified they weaknesses ought to have suggested possible ways out.

News Echo wishes to note that given the precarious fragile nature of the State’s finances it amounts to committing economic suicide destroying such signature project at a time the government remains indebted and unable to meet workers and pensioners obligation as well undertake other economic activities.

If there is no political connotation underlying the action and there is a proven case of poor construction which would have endangered the lives of the people, we frown seriously at this and recommend further actions. The government should without further delay prosecute the contractors and every other stakeholder including those who are supposed to play oversight functions in delivering the project.