Re: Demand for Eze Ilomuanya’s return is not only an illusion but an act of making much ado about nothing 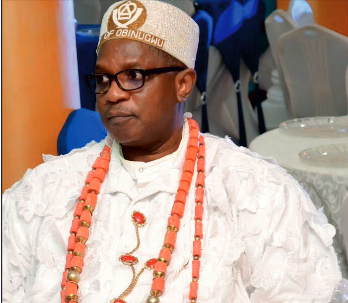 Last Monday, as I was getting set for the day’s activities, a friend called to draw my attention to a very badly written article with an equally poorly crafted title, by one ‘charge and bail’ lawyer, Barr Mike. N. Okafor (I doubt if that is his real name).

The article in discourse was specifically published in the Nigerian Horn newspaper of Monday, April 19, 2021, on page 10. It was a one full page paid advertorial,thus laying credence to the fact that the trash would not have been published because it lacks quality and substance. It should have been thrown into the trash can if not for their resort to advertorial gimmick. The sponsors knew this. They also knew that the only way to force public attention on the primary-school-like article was to smuggle it in as an advertorial.

After painstakingly reading the insipid piece, I wondered how somebody who claims to be a lawyer could write such a tactless article which even a JSS 1 student would hate to be associated with.It was very absurd.

To satisfy my curiosity on who the said hireling could be, I even googled the name, Mike Okafor, just to find out if the name somehow rings a bell. But for where. Google does not even know the meddlesome interloper. I was indeed befuddled.

For emphasis, this mistake of a lawyer, woke up and decided to take on head-on, His Royal Majesty, Eze (Dr) Cletus Ikechukwu Ilomuanya, CON, Obi of Obinugwu kingdom in Orlu local government area of Imo State. What actually gave the misguided fellow the courage, audacity or temerity to throw unwarranted salvo on the first class monarch of Eze Ilomuanya’s pedigree, remains a mystery to me.

However, one undeniable fact is that the article which lacks coherence, focus and is laced with unpardonable contradictions has the imprimatur of HRH, Eze Emmanuel Okeke of Amaifeke also in Orlu LGA. The amateurish manner Mike Okafor ludicrously sang praises of Eze Okeke while struggling albeit unsuccessfully, to diminish the inextiquishable Eze Ilomuanya’s towering royal status, perhaps to justify his pay, was so appalling.

There is no denying the fact that Eze Okeke is the man behind the facade. The watery article easily reminds one of the biblical saying, “hand of Esau, voice of Jacob”. It was indeed, a childish, amateurish and very poorly executed hatchet job.

In fact, if I am Eze Okeke, I will ask for a refund of whatever I gave to Mike Okafor for the hatchet job. The guy’s argument, grammar and logic was a disaster. If anything, he only succeeded in portraying Eze Okeke as a desperado and fifth columnist.

I have always admonished overzealous persons, who erroneously believe that critical writing is anybody’s job, that they are deluding themselves. Writing is a a vocation. It is an art for brain workers, and not for lousy people , least of all, an improperly trained lawyer like Mike Okafor. Honestly, I really don’t know how this guy even passed through the prestigious Nigerian Law School. Or, does it mean that the Law School has become an all comers affair where intakes are not properly screened before admission?

Nevertheless, let us appraise squarely, Okafor’s lame duck arguments in his hog wash article. As for how he managed to get himself called to the Nigerian bar, that should be a topic for another day,after all, Nigeria is a country where impossibilities are easily made possible.

Mike Okafor asserted that former Governor Emeka Ihedioha paid Eze Ilomuanya his arrears of entitlements after reinstating him as Obinugwu monarch as ordered by the courts after Rochas Okorocha’s abracadabra. I wonder where he got such rubbish information from.

A good researcher, more so, a self acclaimed lawyer, would have done his research properly to authenticate his facts, before hastily making insubstantiable assertion. Ihedioha NEVER paid Eze Ilomuanya a dime as entitlement for all the years Okorocha unlawfully kept him out of Office as Chairman, Imo State Council of Traditional Rulers dating back to June 6,2011.

Again, our charge and bail lawyer does even know the import and letters of the laws guiding the Imo traditional institution. He could not even cite one section to buttress his blunt arguments. He preferred rabbling and making vague references to them.

I dare ask what manner of a lawyer is Mike Okafor for Pete’s sake? No lawyer worth his certificates or onions does that. I only pity his unsuspecting clients who patronize him in ignorance, that is, if at he truly exists and has a chamber. I am also constrained not to offer him free tutorials on that. I would rather allow him to continue embarrassing himself,and manifesting his intellectual deficiency on an issue he knows nothing about.

Okafor further described Eze Okeke as “Chairman of Imo Traditional Institution”. My dear Okafor, such office is NOT known to any law in Imo State, and therefore, does not exist. Check your facts please, or better still, consult the Clerk of Imo State House of Assembly, who is a lawyer of sound mind and mentality for guidance.

There was also NEVER a time Eze Okeke abdicated any Chairmanship position for Eze Ilomuanya.A lion is always the king of the forest.
FOR real, any rational mind reading what Okafor obviously struggled to put up, can easily decipher the veracity or otherwise in the gibberish he lumped together and collected money for its publication. Must one sell his dignity because of pecuniary interest?

Perhaps, it might be illustrative to ask Mike Okafor : if Eze Okeke is indeed already the Chairman of Imo Traditional Institution as he claims, what else is he seeking for? Of what essence therefore, is his jaundiced article? Do we have two different traditional institutions in Imo? Incontrovertibly, Mike Okafor is apparently confused here.

He is undoubtedly at sea, thus finding it difficult to differentiate his right from his left. A legal luminary indeed; kposhi, kposhi!
Frankly, I am struggling to avoid doing a thorough and hard line essay on Eze Okeke because of the ranting of this Okafor guy and his ilks. My responsible and respectful background is against it.

But, I wonder why every lilliputian nowadays, finds it more convenient to make news with Eze Ilomuanya’s name. They must know that nobody has monopoly of invectives. There should be a limit to everything.

According to Chinua Achebe, “because the Crocodile opened its mouth for river birds to perk at, does not mean that it has lost the power to kill”. All these people throwing opprobrium and sarcasm about indiscriminately, and cultivating unnecessary enemies and hoopla for Eze Okeke, should watch it.Eze Okeke himself, should call them to order if truly he is not sponsoring them.

In further clarification to a bogus assertion made by Okafor that whatever Okorocha didn’t correct while in office ought to be considered dead, I wish to remind our charge and bail lawyer that government is a continuum.

The seat of the Governor is open for eligible Imo sons and daughters who are qualified, and that is why any action taken by the Governor is seen in official parlance as having been taken by the Governor – in – Office , and not in his personal capacity. Okorocha did those nonsense as Governor,and now that His Excellency, Senator Hope Uzodinma is on seat, his office unfortunately inherits the good, the bad and the ugly of the infamous Okorocha’s administration.

The issue of Ndieze’s meeting in Awo Idemili in Orsu LGA, is another nonsensical issue, which is neither here nor there. Eze Ilomuanya wasn’t even aware of such gathering.

In fact, Okafor’s arguments here, only portrays Eze Okeke as a back stabber, a “Brutus” of sort, who is capable and well crafted in the art of sabotaging any government which embraces him. Okafor is telling Imo people to be wary of the likes of Eze Okeke, who could dine with Okorocha in the night and profess a different colour in day time. A chameleon, one could say. One who is not trust worthy.

Note, the above are not my words, but the simple interpretation of what Eze Okeke’s hack writer, Mike Okafor posited. Okafor is a time bomb waiting to explode in the compound of whoever manufactured it. He is bad market in all ramifications.

I also take strong exception to Okafor casting aspersion on HRH, Eze (Barr) Anayo Durueburuo for freely expressing his mind without pouring odium on Eze Okeke or any other person for that matter. That is how a seasoned lawyer talks and not like a motor park lawyer. Okafor should render unreserved apologies to Eze Durueburuo for such reckless utterances against him in a public space.

Finally, I want advice those who want to market Eze Okeke, to henceforth, kindly do so and leave Eze Ilomuanya alone. They should stop dragging him into pedestrian issues.

Why is Eze Ilomuanya their headache? Why does the mere mention of his name invoke panic in some desperate folks who want to be Chairman of Ndieze in Imo at all costs, even when over 95% of them are clamoring and appealing to the Governor to give them Eze Ilomuanya as their Chairman? I need not remind these panic stricken elements that in Igbo worldview, it is said that “a man whose name is called again and again by those trying in vain to catch a bull, has something he alone can do to bulls “.

This should be food for thought for the likes of Mike Okafor and his busy body group of sycophants. A word is enough for the wise, though am skeptical if he (Okafor) really has any semantic boundary with the word, ‘wise’.
Kennedy Eweama wrote via 0803 552 9265.

IPOB’s UK Asylum: No reason for FG to rant

Bad parenting and the ills of our society