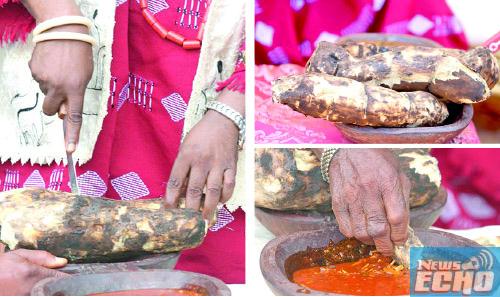 It is a known fact that between August and October every year, many communities in Nigeria, particularly in the South-East and South-South geo-political zones, carry out the celebration of the harvesting of the new yams they had planted at the beginning of the planting season in festival. In carrying out the celebration of their new yams, the people give thanks and praises to Jehovah God for the bountiful harvests and for protecting and seeing them through from the period of scarcity and want that usually characterises the planting season to the harvesting time of plenty and boom when the people become happy and pleased that they have come to the period of plenty and blossom as the yams, cocoa yams and other crops they had toiled to plant earlier have now been harvested to their admiration and which serve them as food materials they and their family members need to feed on to survive.

In many villages and communities in these geo-political zones, new yam celebrations are, most times, carried out peacefully as the celebrants engage in cultural dances and displays, masquerades’ exhibition, exchange of gifts/pleasantries and singing of traditional songs that suit such occasions whereas in some other communities the reverse is the case as many of the celebrants, particularly the younger ones, engage in violent and dangerous acts through which they inflict injuries on some people through the weapons they bear during such celebrations, and after such youths must have taken excess alcohol, engage in smoking sprees on cannabis, Indian hemp and or other narcotic substances that go ahead to intoxicate them and affect and stupefy their brain in perceived paranoia.

This is often the reason why many community leaders are often heard on local radio stations warning their youths against bearing dangerous weapons during new yam festivals; or engaging in drinking excess alcohol and smoking that is capable of stupefying them, seduce and force them to become violent and misbehave during the period of their new yam celebrations. Such warnings are always a welcome development considering the fact that many new yam celebrants had been injured, brutalised, maimed or even killed in the past.

However, despite the fact that some people misbehave during the celebration of their new yam festivals, it is a known and incontrovertible fact, a reality and obvious that new yam festivals many villagers usually cherish and relish on generally have always served as a unifying factor among the people of the various villages and communities in many areas as well as being a way of preserving the culture and traditional values of the communities involved.

It has been observed, too, that during the new yam festivals, many of those natives living outside their homes usually return home to join their kit and kin in the celebration, and during which time such returnees fraternise with their immediate, extended family members and the villagers in general in one way or the other. In many cases, the returnees present gifts of various kinds to their relatives while others help in solving some of the immediate and long-time problems their people face at home through interacting with such relatives and friends. Not only that, many participants use the period of new yam festivals to contribute in propagating this aspect of their cultural heritage for preservative and revivalistic purposes.

At other times, developmental projects are embarked upon during the celebration of the new yams as the coming together of people usually necessitate the articulation and resultant execution of community projects that are meant to impact positively on the people and which include building of town halls and civic centres, schools, award of scholarships to indigent but brilliant members of such communities and the like, sponsoring the young ones to acquire skills too, all of which are conceived during town hall meetings of the concerned communities. That is why almost all communities in Igbo land, for example, engage in new yam celebrations whether the people of such communities actually plant yams or not.

As communities embark upon the celebration of their new yam this year, it is important to point out and advise here that the people must ensure that the period be used exclusively to unify the people the more and glorify God instead of separating them and engage in mundane things. The new yam festival periods should not be used as opportunities to poison some people, main or kill others in one way or the other as they return home to participate; or go ahead to engage in other devilish and satanic acts.

Those who use the period of new yam festivals to offer sacrifices to their god-deities to appease such gods in various ways must desist from doing this as such fetish practices are old-fashioned, outdated, heathen and ungodly so that those who vilify and criticise new yam celebrations and see them as devilish and fetish will be proved wrong and made to see and understand that the modern new yam celebrations are a part of the cultural heritage of the celebrants their forefathers had handed over to them and future generations.

Indeed, the new yam celebrations in some parts of the country must be seen and used as a unifying factor among the people who should use such celebrations to glorify God and thank Him for keeping them alive from one planting season to the other and go ahead to preserve the rich trado-cultural heritage, norms, values and identity of the people of Nigeria.

Nnamdi Kanu to appear in Court next week Wednesday – Lawyer