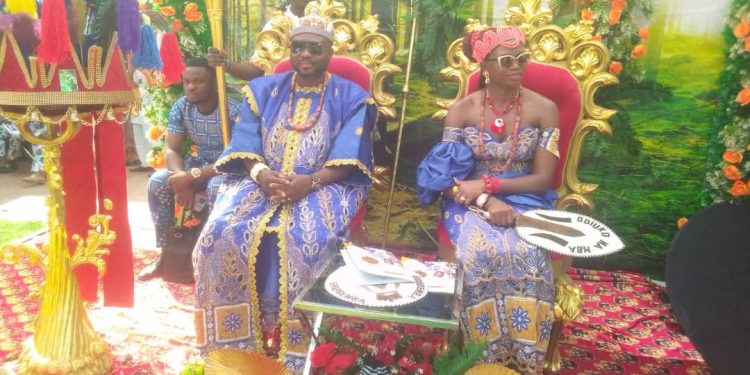 An American mission worker, and hymn writer, Fanny Crosby; in recognition of the amazing and unprecedented wonders of God, called for thanksgiving and praises unto the Lord in her hymnal, published in 1875;-
“To God Be the Glory for the Great things, He had done.” And the Song’s Refrain, further requested, we;
“…the people; to rejoice;… And give Him the glory; for the great things, He hath done.”

An event that welcomed the high and the low, the rich and the poor, the mighty and the vulnerable in equal reception drill.

Journeys to and fro Uzoagba were hitch-free as all the roads leading to and out of Uzoagba, were given face-lift with smooth grading to enable stress-free movements of persons and vehicles in and out of the community, courtesy of the untiring philanthropist, Ebubemba Ikeduru.

A peep into his opulent and stunningly furnished Chieftancy palace named ‘OBI EBUBEMBA’ projects great cultural heritage and artistic historical values and can only be compared with Imperial Palace, Tokyo,Japan and Buckingham Palace, London, United Kingdim.

Declaring the ceremony open, Ebubemba Ikeduru and his amiable wife, Chief Lady Odi-ukonamba, gorgeously dressed in expensively made trado-cultural regalia, decorated with gold fittings and silver linings; pulled out from their exquisite palace, in the like and form of a benevolent angel, seeking to bless the weak, the weary, the poor and the vulnerable and he did.

Ebubemba, reeled in straight terms the significance of Ofala, which he said means (Ofo Ala), as a time of counting blessings and a time of giving back to the society, he futher informed, he loaned the Ofala festival from Anambra, his in-law State.

The soul of the festival was the great traditional ritual performed by the powerful, Eze Uzu na Ichida, to establish Ofala Festival celebrations in the soil of Uzoagba and as well empower Ebubemba Ikeduru, spiritually, traditionally and culturally as the Ofala Custodian and host in Uzoagba and Ikeduru LGA and by extension Imo State, even in the coming years.

Eze Uzu’s, unique attire, aura and dispositions explained the trado-cultural significance and dignity of the event and its celebrant.

The festival also recognised Ebubemba’s very good friends and compatriots from far and near especially Solemento and some others who honoured the invitation from Australia, Chiefs Ahunanya and Akuchinyere were also spotted in frenzy mood.

In his regular philanthropic spirit, Ebubemba doled out empowerment for various categories of deserving recipients to mark the second year Ofala Celebration.

Guests were evenly treated to various delicacies ranging from intercontinental dishes to local foods, and as well exposed to open choice brands of drinks; including Whiskies, Ice, Red and White wines; such as French, Italian, and Australian brewed, bottled and corked types and shapes; roasted, baked and cooked meat and stockfish were also served to run as composite dishes.

Renowned cultural dance groups, masquerades of all sizes, shapes, height and built, from all parts of Igboland and beyond, surged into the compound to grace the occasion. Celebrated music artists, such as Igwe Credo, Anyi Dons nwa Mbano, Nfenfe Pericomo, Ikegod And, prolific stand-up comedians that included MC Elegam Face, Nonsokwa among many others were vibrantly active.

The celebration which started the previous night had Thursday Dec. 30th, as its peak and yet rolled into the next day, Friday, Dec 31 with Uzoagba residents and Ebubemba’s kinsmen having a free-for-all merriment.

Looking back at Uzodimma’s Imo after one year in office

The value of Auto financing of Online companies