Igbo Culture and Philosophy – Liberation: How not to antagonize your ancestors 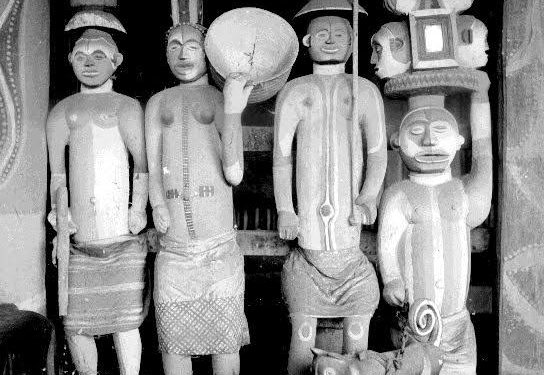 0
SHARES
106
VIEWS
Share on FacebookShare on TwitterShare on Linkedin

Many problem some of us are having today is what we caused by ourselves ignorantly some years back, and it was done out of ignorant thinking that it was a show of power and strength.

It is sometimes accompanied with such boastful comments that “after all I am a child of God, Jesus died for me on the cross of Calvary so therefore old things have passed away and behold all things are new. All of these are bloody lies. They represent lies and deceit at the highest level.

Most of us came to this world through the help of one arusi (deity) or Akwali ọmụmụ, Arobinagu, Akpu, Ogwugwu or through the help of ndi mmírí, (water spirits). Sincerely seek to trace your family lineage and you will discover the truth. The attempt to mislead the people through what we will call Pentecostal madness started early 90’s if we guess right. There are some families in the olden days that calamities fell on; they don’t have any option than to invite a deity to help them.

As a way out some resorted to instituting Akwali ọmụmụ, God of fertility, because some of their women were experiencing barrenness. Then all of a sudden because one considers himself a big shot to be reckoned, will wake up one morning with brainwashed memory from one man somewhere that claims to be deputy God and tells you that Omenani na Odinani Igbo (Igbo traditions and culture ) is evil. They go to the point of branding all the things our fore fathers used to guide themselves as ancestral spirit, evil and demonic powers of your father’s compound

You grew up and discovered some items used by your parents, instead of you to mind your business you went ahead and begin to do family liberation, destroying Ofor and lkenga that was carefully and respectfully kept at a corner in the compound. These are all executed in the name of family liberation.

Odinani (tradition and culture) is not a church where you commit and run to a man wearing white apparel in the name of tendering confession”, Odinani (tradition) is a case where you are made to behold the reality if you are in doubt and that is the reason why some people are running into churches. This is because the serving of deities does not show any mercy and demand utmost purity and being straight, upright.

Some of this deities and Ofor ndị ichie have some quarterly sacrifices that are being given to them by your fathers but when they were no more and no one continues from where they stopped, these deities will now turn its back on the family. It could be that they were instituted to curb the rate of untimely death or poverty; sickness…could have brought money which was used to build the house some of us still inhabit when we travel to the village.

Instead of you to ask questions on how to solve the problems, some of us run to the churches where we are shouting die by fire by thunder. They will just fold their arms and be watching you wallow in ignorance!

Why refusing to inherit your father’s ikenga and his offor as the first born?? But you went ahead to inherit his landed properties including his Obi but his offor ndị ichie you will reject. It is equitable that if we must inherit the assets we should also inherit the liabilities.

If that Ofor is somewhere breeding money every minute, do you think you will tag it evil?? If that is the case you would have been the one marketing the practice of Odinani Igbo as a good culture. It is very clear that we have refused to tell ourselves the truth. We should cease from destroying the powers and Ife ndị gboo (all the artifacts of ancestors) in the name of going to church or family liberation/deliverance. We need to be wiser. There is a way to go about it in a traditional way instead of you bringing causes to yourself and your generations to come.

It is natural that no one searches for what he did not keep, he that keeps something knows exactly where to look for it when the time comes, when you invite an Ofeke (loafer) to come and look and take away what your fathers kept, they will end up scattering your life and that of your generations. Most pastors and priests that go for the so called liberations go to the back and feed their chi, settle ndi mmiri and other appeasements but they will not tell you the truth. After embarking on that liberation they will still go and appease the same deities they burnt and we will be fooling ourselves in the name of family liberation

Instead of calling priests, pastors and prophets to come and destroy the deities by fire one can go and look for an old strong native doctor who can divine and in agreement with your family, tell him that you people don’t want the Arusi or deities your father’s worked with because you belong to church or probably no one would be willing to be give them sacrifices.

Then the Dibia (native doctor) will come to your compound with his AFA (oracular item) and do consultations. He will summon the deities to tender their settlement because he who brings a maid or servant to work will settle him when he wants to leave. He will now ask and the mmuo (deities) will begin to speak, in this case scenario cow is involved and other items.

After items are brought, Dibia will now call the mmuo and let them know that the family is no longer in need of their services and if there is any way he still demands or causing havoc in the family because of negligence that from that day he should stop and through AFA consultations mmuo will point other places they were buried as well and dibia will excavate, separate the family and burn them in front of the family members. Case close!!

But there are some cases where one out of the family would be interested in feeding the mmuo then the dibia will separate him from the rest of the families and re-institute the muo only for the person and others won’t have issues.

Let us all be careful and keep our eyes wide open because everywhere evil ones are looking for who to deceive and devour..

We will go against criminals in Anambra – Chief of Defence Staff