God of Thunder (Amadioha); does it actually work? 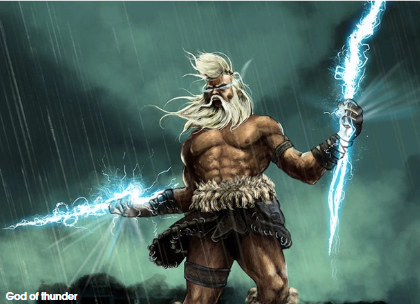 0
SHARES
355
VIEWS
Share on FacebookShare on TwitterShare on Linkedin

One of the important aspects of Igbo culture is the belief that God of thunders exists and that it could be used to perform some mystic actions just like many other beliefs in Igbo mythology, There are several opinions on the effectiveness of Amadioha as a powerful God. That means that during the clapping of thunders, some day it is angry or that it is giving notice of its impending violent action.

This article does not involve itself in the details of celestial components and actions but it is only involved in discussing the Igbo man’s cultural belief in the activities of Amadioha.

When I was growing up, somebody came and stole a large number of my father’s goat and sheep. Out of a herd of 30 goats and sheep, they stole 20. In the morning when my father realized that his goats and sheep had been stolen, he lamented but resolved that he was going to invite Amadioha Ozuzu. His first wife Igbonekwu who was standing buy affirmed his decision.

On a second thought, he remembered there was a priest agent through whom Amadioha can be invited. He changed his mind and re-directed my half brother to the house of the agent of Amadioha in our clan. Although I was very young then, probably twelve years of age I and the other siblings of the family were very excited to see how the priest of Amadioha will return the stolen goats and sheep.

My father was full of high expectations that the priest will return the goats and sheep and that the culprits visited the wrong house. From that day, every morning, members of the family and the villagers were in high anticipation because it was the first time that Amadioha will be in our community to do a revenge job.

Quickly, my half brother dashed out to the house of Amadioha’s agent’s house. From that day, our community and everyone was ready to receive the agent of the chief priest. Nobody in my family traveled out within the next four days he was being expected because everybody wanted to be part of the activity and how it will play out.

I overheard my father discussing with his uncle Uwa that everything needed by the visiting agent of the Chief priest of Amadioha are almost complete. According to him, they included fully white mature ram, one fully mature white cock, and tender palm fronts. These would be used by the chief priest to barricade the entrance to our house before he will begin his action.

This is because once he stepped inside our compound and had sounded his trumpet of violence, everybody except elders would be expected to retire inside the house. On the D-day, some of our villagers began to throng our compound. Most of them were in groups discussing the expected high mystical performance of the agent of the chief priest of Amadioha.

When it looked as if he was delaying in coming, my father advised that he would not come until the sun comes out because he would always link up with the sun to be sure that his sacrifice will be accepted. As we were waiting at about 11:30am, he arrived with pump and pageantry with two of his servants carrying in a small narrow basket the symbol of Amadioha.

As he walked into our compound, few elders who were outside stepped forward to receive him as everywhere became solemn. It was only the oldest of the elders that shook him including my father. Because ordinarily, the chief priest of Amadioha and all other deities did not exchange handshake with ordinary persons except those already fortified.

He suddenly blew his trumpet ‘tura tura’ (7 xs), then began the activities to set up a mini shrine of Amadioha. When my father presented him with kola nuts, he did not accept it saying that I don’t want to take anything until I have dealt with these marauders. It took him almost 30mins to set up the mini shrine of Amadioha.
With the assistance of his two servants, the shrine was ready and he brought his long Ofor from his bag and began to curse. As he cursed, he focused his eye on the rising sun, and with the white cock in his hand, he raised it up, facing the sun as he invoked the spirit of the powerful Amadioha to come and deal with the marauders who came here to take away some sheep and goats.
As he invoked, he sang in a cryptic tone. Sometimes, talking to himself with all seriousness and concentration. As he was about to conclude his invocation and cursed, he asked one of his servants to give him his matches in his bag. With it, in a twinkle of an eye, he excised the head of the cock and sprinkled the blood all over the mini shrine. After that, the only thing he said was, ”They are gone.”

He said with authority. Many of us ran a little and far from the shrine because we were afraid he will deal with the ram the same way he dealt with the clock. Part of his curses was, ”anybody single or group that came to this compound and removed these herds of sheep and goat will suffer the wrath and anger of Amadioha Ozuzu within seven day.”

For each curse, he would beat his staff (Ofor) on the ground. After this, he began the process of packing his items. He relaxed. Then my father brought kolanut and a disc containing oil bean (Ugba) and other little little edibles. For the first time, he discussed and conversed with some elders. After seven days, our father came back from the market shouting that somebody saw 4of the herds roaming around our vicinity. But since it was not all of them, the jubilation was limited but it was something. Although I heard that the leader of the group that stole the goats and sheep died violently in the market when he was hit by a falling tree (this i could not confirm) people

In fact, in Igbo culture, Amadioha Ozuzu untill today is a dreaded powerful God and whenever it was mentioned, people trembled. Until today, whenever it begins to rain, many people run inside to take shelter because the God of thunders can always create lightening which is very dangerous.
I remember many years ago when I was doing a research for one of my books, Foundation of Igbo Tradition and Culture, in order to be authoritative and authentic I took a drive to a community called Ozuzu in order to visit the shrine of Amadioha. Indeed, I did and met with the chief priest of Amadioha who confirmed to me that the efficacy of Amadioha Ozuzu cannot be contested by any doubting Thomas. Do I need to say more????
Nb: this page is for the promotion of Igbo tradition and culture. Therefore, my readers are free to call me on 08033919188 to ask questions on any aspect they want to know more about.