Echos of Culture : THE LIMITS OF PROPAGANDA: EMEKA IHEDIOHA/TAMBUWAL’S SAGA 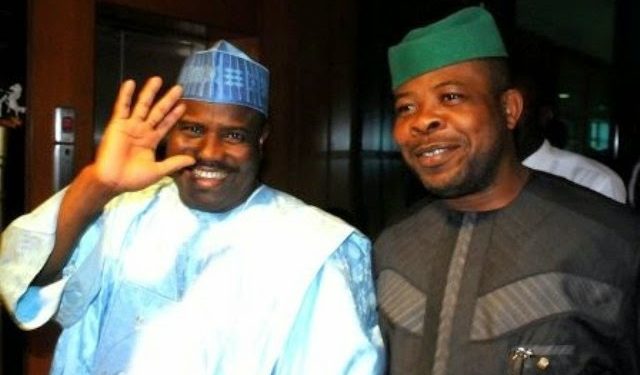 Sometimes if not all the time, I prefer not to indulge in State matters which have assumed controversial propensity. But if I pride myself as a Public Opinion Analyst and one who is in the position to influence a lot of opinions, it will amount to disservice to my state if I maintain silence on issues of public importance.

What is more, as a political scientist of many years practice, one of the aspects of studies of Political Science to me was to study, dissect, analyse an issue that is vital in functional politics. And that is PROPAGANDA. There are three words in State craft that are often misused, misapplied and misunderstood. They are…Propaganda, Corruption and Governance. In this analysis, I want to delve into the current issue which has dominated the discussion not only in Imo State but throughout the nation as far as politics is concerned because of the current complexities which has characterised the visit of Rt. Hon. Emeka Ihedioha, CON, former governor of Imo State to his friend Rt. Hon. Waziri Tambuwal, the current governor of Sokoto State.

It is unfortunate that a mere condolence visit should have assumed such a propondrous dimension in such public domain. This is what Robbert Whoo refers to as bad politics. Or what Kelvin Kab, a former press secretary to Richard Nikson refers to as armaturist propaganda.

Unfortunately, those functionaries servicing government nationwide have come to comfortable terms by applying what they may call “PROPAGANDA“ as a process in modern governance, without caution.

Although I am a student of Paul Joseph Goebbels, a German Nazi politician who was the Gauleiter (District Leader) of Berlin, Chief Propagandist for the Nazi Party, and then the Reich Minister of Propaganda from 1933-1945. He was one of Adolf Hitlers’ closest and most devoted acolyte known for his skills in public speaking and his deeply virulent antisemitism which was evident in his publicly voiced views. As a political scientist, his philosophy impressed me so much. But I condemn in totality his authorship of the genocidal extinction of the Jews which led to the gassing of 6million Jews. An act that no scholar of pure mind will accept then, now and in the future. Unfortunately many misunderstood his propaganda exploits hence we may refer to those as armaturist propagandists.

Hence for example he wrote, “ Propaganda is not an end in itself, but a means to an end.” Unfortunately, Paul Joseph Goebbel did not advocate that propaganda is total falsehood or an act of deceiving the people with lies. But he admitted that, “Propaganda works best when those who are being manipulated are confident they are acting on their own free will.” In our own present situation, the population has advanced, news media outlets are now numerous and the level of the people’s political emancipation is high. Therefore the armaturist propagandists must be aware of these facts.

Although Paul Joseph Goebbel also asserted that, “If you tell a lie big enough and keep repeating it, people will eventually come to believe it.” But in our today’s level of development, academic and political attainment, they may not begin to believe the big lie but more often would analyse, dissect and purify that lie untill it is made naked to the interest of the society. I tend to subscribe myself to the fact that associating Rt. Hon. Emeka Ihedioha’s visit to sokoto with the worse big lie that, “ he is now a Moslem simply because he knelt down and participated in the prayers being offered in honour of the dead.

That action speaks foul. Who would even believe that? Even if we are all created with cocoyam brain. Anybody or those who fabricated that story is respectfully invited here to our office @Opinion House to be given a new orientation of propaganda so that they will stop embarrassing their principals. Because big lies in form of propaganda in modern times does not reject the authors of such propaganda and their principals in the form of a good light. Why because, false hood as a propaganda is easily punctured by alert and knowledgeable members of the public. Many writers, commentators before me have articulated instances where many non-Moslems and Moslems have worshiped together.

And that did not make them either Moslems or Christians instantly. For example, Governor Tambuwal visited Rt. Hon. Ihedioha in 2013 at Ihitte/Uboma when he lost his sister (Chetachi). I was present and Tambuwal attended the church service with a large number of his political associates who were Moslems. They participated along with us in all the processes of church service including kneeling down when we did and standing/praying when we did. After the ceremony, I personally exchanged pleasantries with Gov. Tambuwal. He did not become a Christian automatically for worshipping in the church.

The impact of this analysis is to advice those government handlers to be more careful and not in an effort to mole down an opponent with primitive propaganda which will have a negative impact and import on the image of their masters. In fact and indeed, the author of that idea, that because Emeka went to Sokoto, prayed in the mosque with Moslems have made him a Moslem is off the curve or what football commentators would refer to as over the bar. We should be more civilised than that.

After all, Emeka Ihedioha is a Knight of the Anglican Church and so shall he remain until he dies. Because for someone of that level to change his faith is unthinkable. And those self styled propagandists must be more reasonable and resourceful so as not to cause their principals series of embarrassments through their characterisation of what they call propaganda which is more destructive than beneficial.

This is a candid advice.