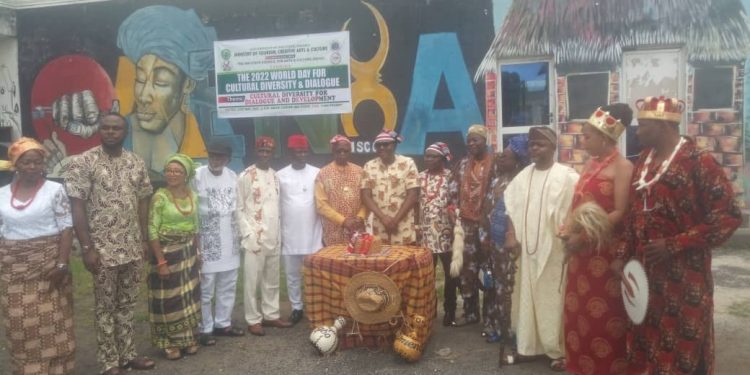 As Imo State marks the 2022 World Day for Cultural Diversity and Dialogue on Tuesday, Commissioner of Tourism, Creative Arts and Dialogue, Mazi Uche Ohia (PhD), has called for mutual understanding of cultural differences among the diverse tribes of the world.

The event was held at FSP, Mbari, Owerri, with some government functionaries, lovers of culture, arts and tourism gracing it.

Ohia emphasized that when people across the world understand, respect cultures, languages of others there will be peace, unity and development in all facets of the world, saying no culture is greater or better than the other, but uniqueness of culture or tradition matter most.

He stressed that there are unique differences in every culture even as God created all humans uniquely, pointing out that the problem is how to achieve unity in diversity for the overall development of Imo State, country and the world.

According to the Commissioner, “there are many kind of masquerades so do languages and no culture is greater or better than the other, for God made every tribe great and unique. It is better that we understand these cultures and their uniqueness. The double weddings: white and traditional weddings are waste of resources. Hence we must understand that Igbo culture is complete as English or Yoruba cultures”.

Ohia, while urging people to be proud and confident to observing and showcasing their cultural heritages wherever they see themselves, commended Governor Hope Uzodimma for supporting the event as well as promoting and sustaining cultural heritages of Imo State.

Hinting that the event which was suppose to hold on 22nd May 2022 in line with the directives of the United Nations could not take place due to exigencies of political activities in the state, the Permanent Secretary, Ministry of Tourism, Creative Arts and Culture, Theodore Uzoma Nwaokonkwo, observed that the ceremony was rich and spectacular, thanking all for coming and participating effectively.

The theme of the event is “Cultural Diversity for Dialogue and Development”. The event was organized by the Ministry of Tourism, Creative Arts and Culture in collaboration with the Imo State Council for Arts and Culture, ISCAC.

However, drama and dance by Omenimo Dance Troupe were performed to entertain the audience who called on government to invest hugely in tourism, culture and creative arts with a view to strengthening peace, comfort and development across the world.