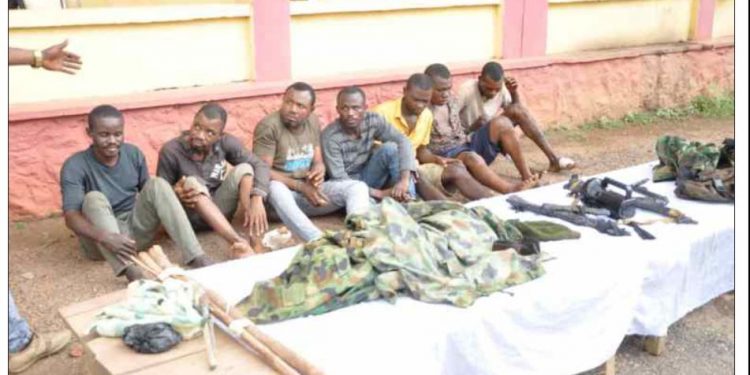 The Ogun State Police Command has arrested six suspected armed robbers operating in military camouflage within the state. The suspects who were paraded alongside other notorious criminals were arrested on the 4th of September 2020, at about 2:30 am.

After the Command received a distress call that a gang of armed robbers who dressed in military camouflage uniform have blocked the Sagamu-Benin expressway at Ijebu-Ife, forcefully dispossessing motorist and commuters of their valuables.

Parading the suspects at the state police command, the Commissioner of Police Edward Ajogun said on the strength of the distress call, a team of Special Anti-robbery Squad (SARS) was detailed to join forces with the patrol team of Ijebu-Ife division and confront the daredevil men. On sighting the policemen, the hoodlums engaged them in a gun battle which lasted for about 30 minutes, at the end of which one of the hoodlums was shot dead while others escaped with gun-shot injuries.

SARS operatives embarked on a technical and intelligence-based investigation which led to the arrest of one Vincent Magnus and Elias John in the Apapa area of Lagos State on the 11th of September 2020. Their arrest led the operatives to the 7up area in Ikeja Lagos on the 12th of September 2020 where three other members of the deadly gang namely: Ikechukwu Alore, Ifeanyi Emmanuel, and Chibueze Kingsley were apprehended. Exhibits recovered from them include: – 3 complete pairs of military camouflage, one military vest, one military nose mask, one army head-warmer, one military camouflage bag, and 3 mock guns fabricated with black cello-tape.

Ikwezi Mgbidi Festival: Where virgin girls are celebrated for their purity