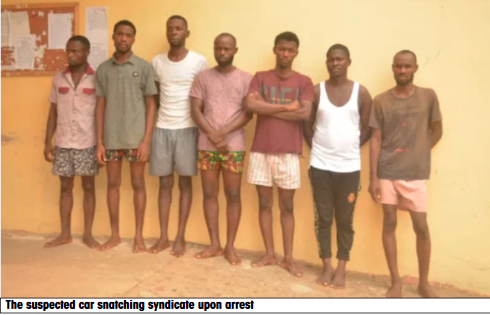 Operatives of the Imo State Police command has busted a car snatching syndicate and arrested seven members of the gang while recovering a stolen SUV vehicle from them.
According to a press release by the spokesman of Imo State Police Command, SP Ikeokwu Orlando, the car was snatched from the owner in Aba, Abia State and brought into Imo State by the syndicate.

“On 1st February, 2021, based on a distress call from Aba, Abia state, informing the command that some hoodlums snatched one LEXUS 350 SUV, with reg. No. KSF 758 FS, and were believed to be moving towards Imo state. “Upon receipt of the report, operatives of the command’s Quick Intervention Team (QUIT) swung into action.

The press release further disclosed that the stolen SUV was recovered from them at the point of arrest.
The press release added, “It is noteworthy that the suspects were all released from Aba prison after serving their jail term on a similar offence. “They all confessed to the crime and explained their various roles in the gang as follows: While Amado Kenedy, Igilegbe Chinendu and Nwaorie Moses, are the operational members, whose responsibility was to snatch the vehicle,

Godfrey Ntosi, Chinedu Agwu , Ejiofor Egwe and Eze Obinwanne who are all Artisans, are saddled with the responsibility of rebranding the snatched vehicle, removal of tracking and security devices installed in the vehicle, as well as sales of any such vehicle.
In conclusion, the press release disclosed that arrangements are at advance stages to transfer them to Abia state for further investigations and prosecution.