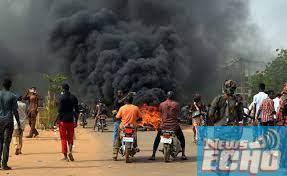 Four people have been reportedly killed in a communal war between the people of Ukawu and Isinkwo communities in Onicha local government area of Ebonyi State, even as their corpses were allegedly taken by their attackers.

The people of Ukawu community had on Tuesday, went to a beach which has been causing dispute between the two communities to excavate sand which has been a source of livelihood to the communities, only to be allegedly attacked by the Isinkwo warriors. During the attack, four people were allegedly killed.
According to a community source, the Ukawu people tried taking advantage of the sit at home order, thinking that the area would be calm not knowing that their opponents had already laid ambush.

“When our people got to the beach, the Isinkwo people opened fire on us and we had to run for our lives. But on getting to our meeting point we discovered that four people were missing.

“Some of us confirmed they saw when they were shot dead and their corpses taken away. The worse was that we were taken unawares. We didn’t go with gun because we never anticipated any attack. For sometimes now the area has been calm”, the source stated.

One of the victims, as gathered was identified as Offor Ujebe, in his mid 30’s with three children and the last child is about 9months, while the identity of the other three victims were yet to be ascertained at the time of filling this report.

When contacted on phone, Ujebe’s wife who had already lost her voice, stated;” they just called me that I should start coming back to the village from Abakaliki, and I left with my three children. On getting to the village now they are telling me that my husband went to the beach were they normally work and there was an attack and they are yet to see him till now.”

When contacted, the police Spokesperson in the State, DSP Loveth Odah, said the report had not reached her table, but was hopeful that before the day runs out she would get the signal.