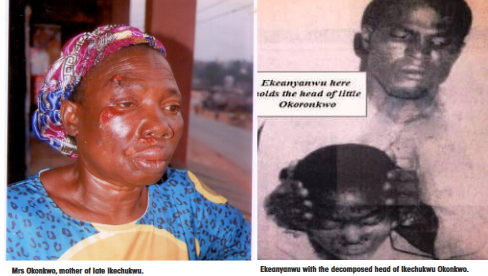 0
SHARES
285
VIEWS
Share on FacebookShare on TwitterShare on Linkedin

Yes. Why? Just, why? Nigerians usually ask this question when things go awry. At the momentous stage of life when one plus one no longer gives two as the answer, all and sundry, standing aghast, ask? Why? Most times, it comes like this: why did he do it? Or. Why did they do it? This act of finding an answer to that deed, of course an odious one normally comes from concerned members of the public: men and women; boys and girls; old and young; rich and poor; educated and illiterate – just to find an answer to a pathetic situation.

Certainly, when the bewildered masses resort into asking ”why did he/they do it”, be sure that an absurdity has just taken place. Count on your finger tips: the courageous Patrick Chukwuma Nzeogwu, the revolutionary army major who inspired the first military coup in Nigeria, thought he was doing a noble course. He gathered fellow military men of like minds, tutored, mentored and indoctrinated them on the need to stage the Coup of January 15, 1966. They aligned with him. In the end, the coup, though a patriotic and nationalistic venture, turned bloody. The prime minister, Alhaji Abubakar Tafawa Balewa; and other top civilian and military officials, had lost their lives. The coup failed and Nigerians who originally hailed Nzeogwu, asked: why did do it?

Of course, on February 13, 1976, Colonel Buka Suka Dimka also carried out a putsch which resulted into a coup. In the process, the head of state, General Murtala Muhammed lost his life, so did few top military officers. At the time, Nigerians held Murtala in high esteem. He was regarded as a hero, especially after creating the 19 state -structure. As the coup failed and the act was condemned, Nigerians in their numbers asked Dimka and his fellow conspirators; why did they do it?
In the same line, a certain Major Gideon Orka, very handsome, tall and bold, again, shocked Nigerians when his led over 52 other of his gang to topple the regime of General Ibrahim Babangida on April 22, 1990. That project crashed like a pack of cards. The coup failed and the plotters and their sponsors scampered. Babangida survived. And Nigerians in their usual manner did one simple thing they knew how to do best – why did Orka do it?

Most times, why did he do it comes in form of a rhetorical question – it needs no answer! Why did he do it is usually when the cookies have come to crumble. At the sound of it, the next is fury and fidget. When you hear why did he do it, mark it that progenitor’s action has boomeranged. Had he succeeded, he would have been celebrated and carried high. But he did not. Nzeogwu failed. Dimka flopped. Orka fluffed. And many others have been fumbling ever since then.

And then, on September 19, 1996 in Owerri, Imo State, an innocent 11-year-old boy named Anthony Ikechukwu Okonkwo was murdered for rituals. According to an account; “the little boy was hawking boiled groundnuts, which was his daily routine. He strolled along, selling his groundnuts for peanuts to whoever wanted to buy. When he got to Amakohia area of Owerri, his eyes lit up with joy when a customer beckoned on him to approach. That ‘customer’ was named Innocent Ekeanyanwu, aged 32. The boy was called into the famous Otokoto Hotel and the little groundnut seller was visibly very excited, since it was a hotel, it meant that the new ‘customer’ would probably be buying plenty groundnuts which will mean more money to take home to make his parents happy and assist his struggling family.

“While waiting, the boy was treated like a guest, he was given a bottle of Coca-Cola to cool off from the punishing heat of tropical Africa.
Innocently, he took the Coke and gulped it with relish. As he was sipping his soft drink and taking a look at the glittering surrounding of the hotel, he could have imagined having a hotel of his own too later in the future. As he was dreaming, his vision became blurry and the sounds around him became muzzled and dull. In a matter of minutes, he dozed off, never to wake up again. His tray full of groundnuts was lying in a corner.

Observing the boy from a safe distance was the man who had called him to buy his groundnuts. He had spiked the boy’s drink and once he saw he was asleep, he took the limp body of the drugged lad into one of the hotel rooms and what followed next remains one of the most evil things anyone can ever dream up. A sharp cutlass emerged from nowhere and the boy’s head was severed from his body. He was beheaded in a matter of minutes. After the boy’s head was cut off, he disembowel his torso, removed his liver and other parts he needed.

Not done yet, the boy’s genitals were not spared as well. After butchering the boy, and sorted out the organs, he packed his head inside a polythene bag, and buried his remains. The Butcher, Ekeanyanwu then took the polythene bag containing the boy’s head, and headed for the next destination: to the house of the man who needed the fresh head -the man who is behind it all”.

But you know, nature works in a mysterious circumstance. Ekeanyanwu the hunter became the hunted. He was caught in his own snare. He did not succeed in what he wanted to do with little Okonkwo. He was caught, detained in the police station where died after confessing to the crime.
Okonkwo’s case dramatically and mythically changed the cause of 419 projects in Owerri. The masses revolted and unleashed mayhem on all identified 419 practitioners, their associates, businesses and promoters. Owerri was on fire. Judicial panel of inquiry was set up after several arrests had been made. In the end, culprits were sentenced by firing squad. So, why did Ekeanyanwu and his group do it?

However, almost 25 years after that ugly and pathetic incident, Okonkwo’s mother, Mrs. Patricia Abel Okonkwo, is still living in abject poverty. She is going through a most dehumanizing experience in life. Her abode is a shanty. Her other child is now mad. She is rejected by her husband’s household; mocked by her siblings who she ran to for safety and succor. As a matter of fact, Mrs. Okonkwo is praying for death to take her away the next hour as her life is meaningless. She is a personified character in the Thomas Hobbes description of nature being nasty and brutish.

The irony is that several governments have come and gone, both military and civilian, without none doing anything to come to the aid of Mrs. Okonkwo. Really, this woman needs help to assist her overcome the death of her first son who was taken to Owerri from the village by her brother on the guise of sending him to school. Rather than sending the boy to school, the man and his wife sent him to hawk groundnut for them and sadly he was a victim of the Okokoto money ritual group that ravaged Owerri at the time, and he died. Unfortunately, the man who took little Okonkwo to Owerri whereupon he met his untimely death, is the one pushing Mrs. Oknkwo out of her father’s house now in the village!