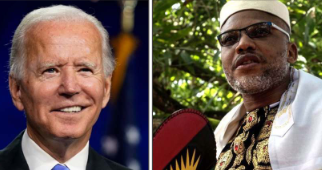 0
SHARES
129
VIEWS
Share on FacebookShare on TwitterShare on Linkedin

The Indigenous People of Biafra (IPOB) says it has written to the United States of America (USA) and the United Nations (UN) on why the two separate bodies must work hard to ensure the independence of the Republic of Biafra. He also said that the killing of his pro-Biafra group members was a sign of genocidal campaign against tens of millions of Christians and Jews, particularly those indigenous to the former Republic of Biafra.

According to him, “These include mass killings, torture, and the destruction of Christian schools, churches and Jewish synagogues. He has arbitrarily branded and terrorized the Indigenous People of Biafra (IPOB), a nonviolent group pursuing the Independence of the former Republic of Biafra. Mr. Buhari’s draconian measures were geared to retaliating against peaceful demonstrations favoring the restoration of Biafran independence that was cruelly extinguished by a genocidal military campaign Buhari partly led between 1967 and 1970.”

IPOB says it has several reasons the government of the United States of America, under President Joe Biden should not grant any request for military assistance to Nigeria. IPOB said this in a letter dated May 1, 2021, made available to News Echo by its spokesperson, Comrade Emma Powerful and signed by Mazi Nnamdi Kanu, its leader and addressed to the President of the United States of America.

In the letter, Kanu urged the US President to consider many negative realities unfolding in the current day Nigeria, how they all started and who is behind them before considering rendering any military assistance. He stressed that selling weapons to the current administration led by President Buhari will not go down well with the high records of human rights violation witnessed heavily in Nigeria, and will be counterproductive.

“President Buhari has made Nigeria the most dangerous country in the world for Christians, Jews and Nigeria’s indigenous peoples, particularly those of the former Republic of Biafra. Hundreds of thousands are routinely plundered, tortured or killed with impunity by Nigerian security forces controlled and populated by Buhari’s Fulani Islamic tribesmen, often in collaboration with Fulani herdsmen (Islamist terrorist group that has been internationally branded the 4th deadliest terrorist grouping in the world).

These atrocities have been confirmed and published by US State Department in its various Human Rights Reports on Nigeria, by Amnesty International and other credible bodies. The US Commission on International Religious Freedom has recommended listing Nigeria as a country of concern because of its religious oppressions. United States sales or transfers of weapons to Nigeria to fight Boko Haram are diverted to killing and terrorizing Christians and Jews. The Nigerian army, which leadership is Fulani and Islamist is complicit in these illicit transfers,” part of the letter reads.

Kanu in the letter also accused President Buhari of treating Boko Haram with kid gloves, releasing from detention hundreds arrested by the previous administration for terrorism on the ground that they have repented. He also told the US government that Buhari had appointed radical Muslims to head every security agency in Nigeria. Kanu said that manner in which Sheich Isa Pantami, Nigeria’s Minister of Communications and Digital Economy whose support for Al Qaeda and Taliban was widely published is protected shows negative signs about the Buhari led government.

“Mr. Buhari has refused to sack him from his sensitive position as Minister of Communication overseeing the biometric data of Nigerians. By defending the Sheich Pantami, Mr Buhari is seemingly aligning with Mr Pantami’s terrorist sympathies. Mr Buhari is a strong ally of the Islamic Republic of Iran and China; and he has generally pursued policies that put Nigeria at odds with US national interest since you came to office.”

IPOB prayed the US President to consider, among other things, denying weapons sales or transfers to Nigeria under the Leahy Amendment; listing Nigeria complicit in persecuting Christian and Jews under the Global Magnitsky Human Rights Accountability Act.

“We respectfully urge Mr. President to invoke particularly Section 620M of the Foreign Assistance Act of 1961 (FAA), as amended, which prohibits the furnishing of assistance authorized by the FAA and the Arms Export Control Act to any foreign security force unit where there is credible information that the unit has committed a gross violation of human rights. We state categorically that the national interests of the United States lie in protecting Christians and Jews in Nigeria, defeating radical Islam and preventing instability in West Africa which will altogether be enhanced by a US-led diplomatic pressure on the Nigerian government to – as a matter of urgency – agree to a UN-supervised referendum on Biafran Independence,” the letter concluded.

Meanwhile, it has been observed that informed Nigerians are of the view that the current instability in the country which has polarized Nigeria into ethnic and religious lines. They reasoned that if the government at all the various levels should be more responsible in delivering dividends of democracy, the agitation for ethnic autonomies would come to an end.

For instance, most Igbo people are of the opinion that the renewed agitation for Biafra is as a result of the perceived marginalization of South East by the present administration. However, the Federal Government has always pointed out that it has not been marginalizing Ndigbo IPOB and other bodies normally claim. It usually points to the ongoing projects in the zone like the Second Niger Bridge, the Onitsha – Enugu Express Road, the Enugu – Umuahia- Aba – Port Harcourt Express Road as well as the Owerri – Aba Express Road as a sign that Ndigbo are not left out in the schemes of things. To this effect, the Federal Government reminds the South East that it has ministers in top ministries and other executive positions of federal agencies and boards.

Ebonyi Airport to be ready December 2021