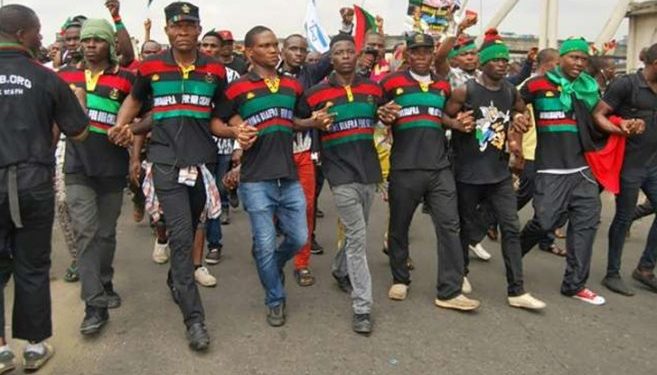 Amid the disturbing wave of gross insecurity across the country, particularly in the South East, the leader of Indigenous People of Biafra, IPOB, Mazi Nnamdi Kanu, has once again made it clear that only the actualization of the Sovereign State of Biafra would guarantee safety, peace of mind and tranquility to the people of South East.

Speaking in one of his recent radio programmes from Houston, Texas, USA, Kanu said that Ndi-Igbo must join hands to ensure that Biafra is realized in the nearest possible time.
The Biafra agitator revealed that Imo State had been turned into the zonal headquarters of herders. He noted that such a situation would never be tolerated by IPOB and other well meaning Igbo.

According to him, what is happening in Orlu where many Igbo lives had been slaughtered and nobody had said anything was evil and uncalled for.
He lamented that the insecurity in Orlu and elsewhere in the South East, with its attendant conspiracy of silence came as a result of government incompetence occasioned by the fact that almost all the governors of Igbo nation were either sponsored by the Nigerian oligarch or have their loyalty attached to the Northern political aristocracy.

Kanu enthused that the essence of the Biafra struggle was to have a country free from the incessant harassment of herdsmen or intimidation of bandits. He boasted that in Biafra, there would be no insecurity such as the mayhem in Orlu. Under Biafra what is happening in Imo State could not in any way have been thought about.
He concluded by wondering why Igbo political leaders, Ohanaeze Ndigbo and the governors have not been bold enough to ask the Federal Government of Nigeria to provide security to Igbo nation.